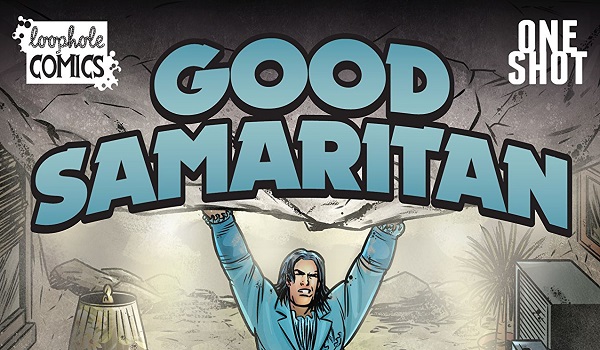 Do we take heroes for-granted? This is the question posed to us through the one-shot comic Good Samaritan. Written by Mike Exner III, illustrated by Erik Korsgaard and lettered by Micah Myers, it’s avaliable from Loophole Comics.

The story is set during an alien invasion where sidekick hero Squire attempts to rescue a family, but immediately gets overwhelmed. Seaside City’s main hero The Nobleman is no where to be found so Squire abandons fighting the alien invaders to find the one person that could save them. He does find Nobleman and Squire is not happy with what he finds–making Squire and the readers question the role of heroes in the world. As it is only a one-short story, I can’t say anymore without spoilers.

The plot’s relatively simple – a hero disappearing from the world when it needs him/her most. This simplicity was best for the short story standard of this particular comic. It didn’t need to be anymore complicated. The art is quite good in my opinion. It looks like a very professional superhero comic done by the big names. It fits the tone and style of the story.

The only two characters that were really in it were the Nobleman and Squire. Squire was a little whiny. He comes across as a sidekick that really didn’t know what he was doing and only was in it because the Nobleman would always be there to save him if things got too hot. He, however, is the moral centre of the story.

The Nobleman, on the other hand, is similar to heroes like Superman but more like Metro Man (from Megamind). He saved the world with a smile on his smile. He did everything he could from big to small, but it turned out that he really isn’t happy with how the world changed.  Still, the Nobleman was the generic example hero, but I think that was the point of the character.  (Read the comic to find out more!)

I’m not sure if it was on purpose but the overall message of the comic was very critical of how the world changed and became quite selfish and self-obsessed. The commentary on humanity was quite grim, but apt. As with every story, every reviewer has to nitpick it. I didn’t have a really problem with anything. However, I think the one area that could be approved is the characters themselves to be more fleshed out). Since this is a one-shot, it is a little bit harder to flesh out characters, but if they ever do a longer series, I would want them to be careful of too generic characters.

Overall, I really enjoyed this comic. The twist at the end was a nice surprise as is the comic’s take on a heroes’ role and how humanity sees them. The writer truly knows how to have a solid beginning, middle and end for a quick, awesome comic.

Check out the one-shot comic here and let us know what you think.  Sound off in the comments or send us your thoughts on Facebook or Twitter!