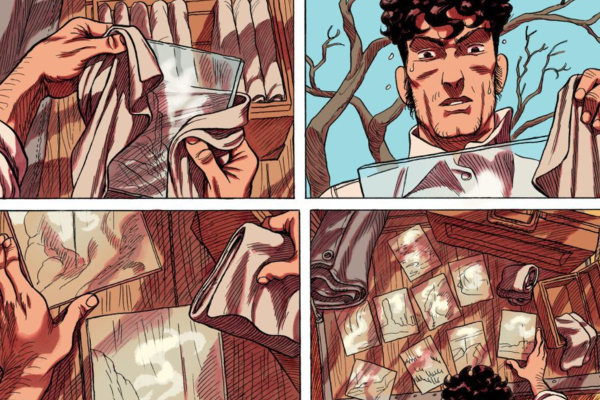 Equally evocative and enthralling, Loo Hui Phang‘s The Smell of Starving Boys is an intense, meditative Western that twists Western traditions into something truly weird. The press release states that the comic centres on the gulf between modern and traditional cultures, including attitudes towards love. The intimacy of the comic can’t be denied, particularly between photographer Oscar and young assistant Milton, who work for geologist Stingley as they explore post-Civil War Texas. However, I would argue that there’s another theme at play here. Throughout Stingley, Oscar and Milton’s explorations through uncharted territories, a haunting presence creeps in and out of the comic, as if the trio’s decent into the unknown sparks some ghostly apparitions.

The three characters themselves are outsiders to this landscape they’re travelling. Only one of them, Stignley, bears any desire to conquer it, showing contempt for the native Comanches whilst Oscar and Milton display quiet caution. A tense pace rattles through the comic when viewed through this lens, making an already-engrossing read all the more alluring. Those aforementioned themes of clash of cultures gives The Smell of Starving Boys a muscular stance, but its execution belittles that stance.

The Smell of Starving Boys rarely meanders, but scattered throughout are lengthily passages of contemplation, of unnerving scenes that explore moods and feelings. It’s at the expense of coherent character growth, which is a particular shame for Oscar and Milton. Theirs is a relationship unboxed at length throughout the comic, which is given an extra layer of intrigue in the form of Milton’s vague gender and Oscar’s sexuality, but it never quite reaches a satisfying conclusion. 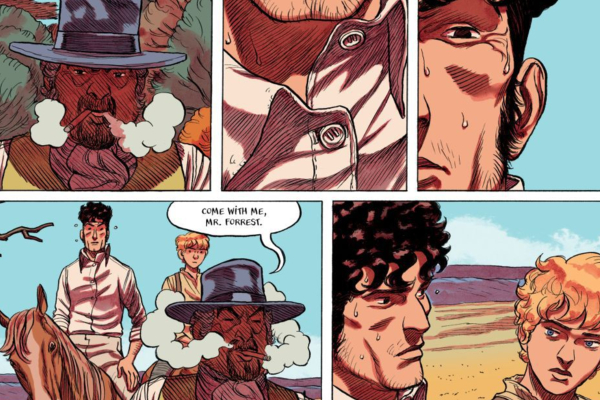 What is immensely satisfying however is the sheer scale of the comic, vigorously complimented by artist Frederick Peeters. Returning to SelfMadeHero’s stables after his four-part epic Aama, he illustrates a completely different world with the exact same bold enthusiasm. A comic that deals with the themes which The Smell of Starving Boys does deserves an artist ready to lift up the comic to freakish heights of visual delight and Peeters undeniably delivers. His tense, perfectly-framed art is an exquisite companion to those lengthily moments of reflection and emotional exploration that The Smell of Starving Boys frequently dabbles in. The hardback, coffee table-esque production values of the comic itself makes reading it feel as though we’re watching some classic Western in widescreen.

The Smell of Starving Boys is a complex creature to tame, but then again, not everything needs to be tamed. Taming a work of fiction like this would do it a disservice. The vagueness in its characters and story are what makes the comic an underwhelming read, but it’s delectably odd nature gives the impression that that vagueness is to be embraced. As such, The Smell of Starving Boys is a thematically teasing and visually impressive comic to experience.

Have you read The Smell of Starving Boys? What did you make of it? You can discover more about the comic from SelfMadeHero. Let us know your thoughts in the comments section below or send us a Tweet!