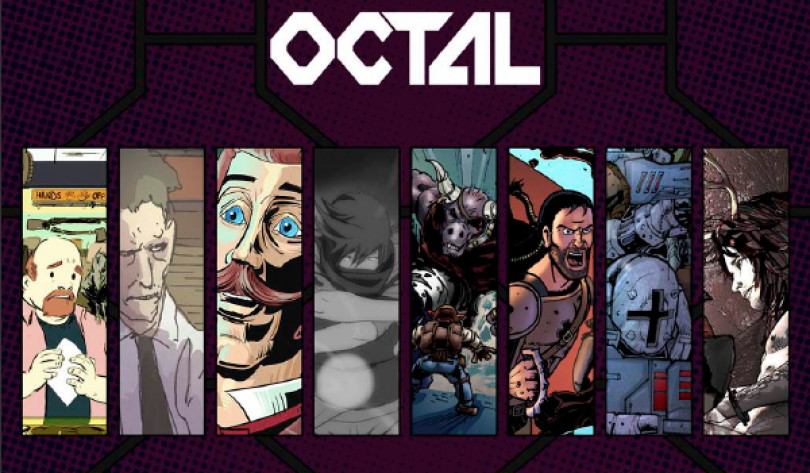 I have reviewed a number of anthologies before, but Octal Vol. 1 is a little different from the rest. This collection of short stories is not just a collection, but rather a “curated catalog of pitch packets,” to quote the book’s description. These pitches act kind of like TV pilots do, setting up potential scenarios, characters, and plots for future stories. The eight presented here range in genre, art style, tone- just about everything, and together make for a very entertaining read.

Since the point of a pitch packet is to see whether or not these ideas would be suited for more comics, I thought it could be fun to evaluate them myself and see what futures I would want them to have. I will try to keep story spoilers to a minimum, but do proceed with caution if you would want to read any of these spoiler-free! 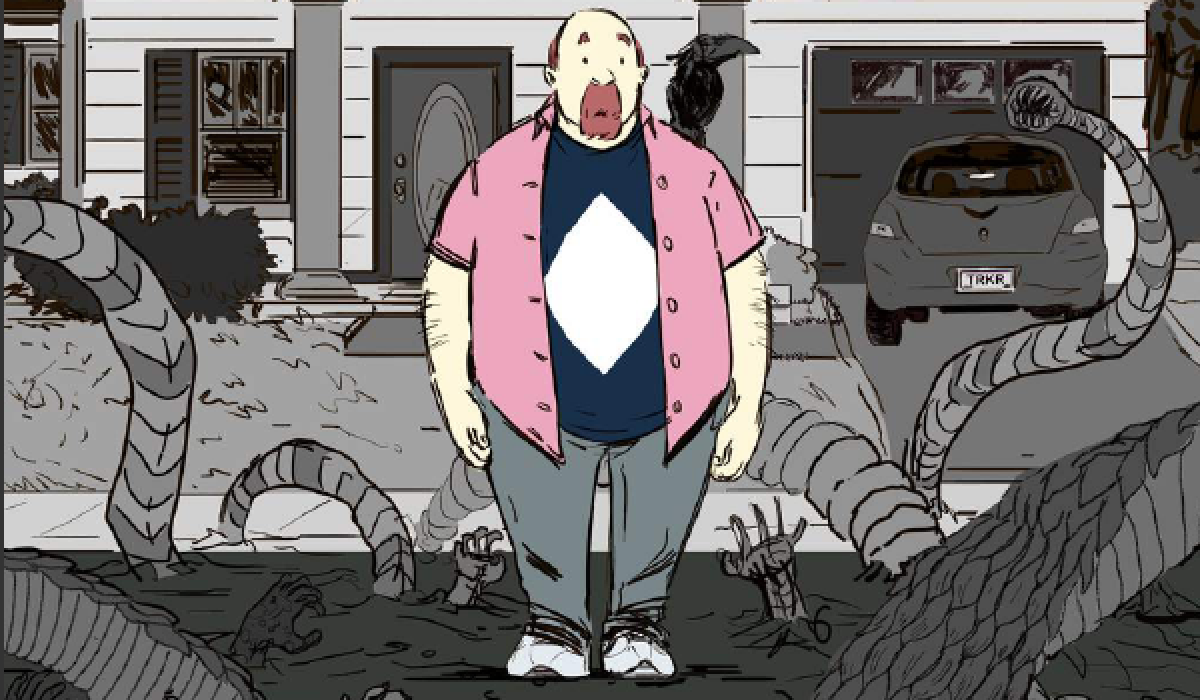 In Octal‘s first story we meet Bill, a middle-aged man who has accidentally received the powers of life and death, and Larry, a magical talking raven. Right off the bat, we are off to a wild start. The meat of this story lies in Bill coming to terms with his new powers and Larry having to fix his messes. Their banter is really enjoyable, almost like that a bickering couple. The story sets up Bill’s powers (illustrated in horrifying detail by David Brame) and the rules of necromancy in this world. Necromancer Bill‘s title tells you everything from the start: real, monstrous stakes, but with a hapless sense of humor throughout. I would definitely read any further adventures with Bill and Larry. 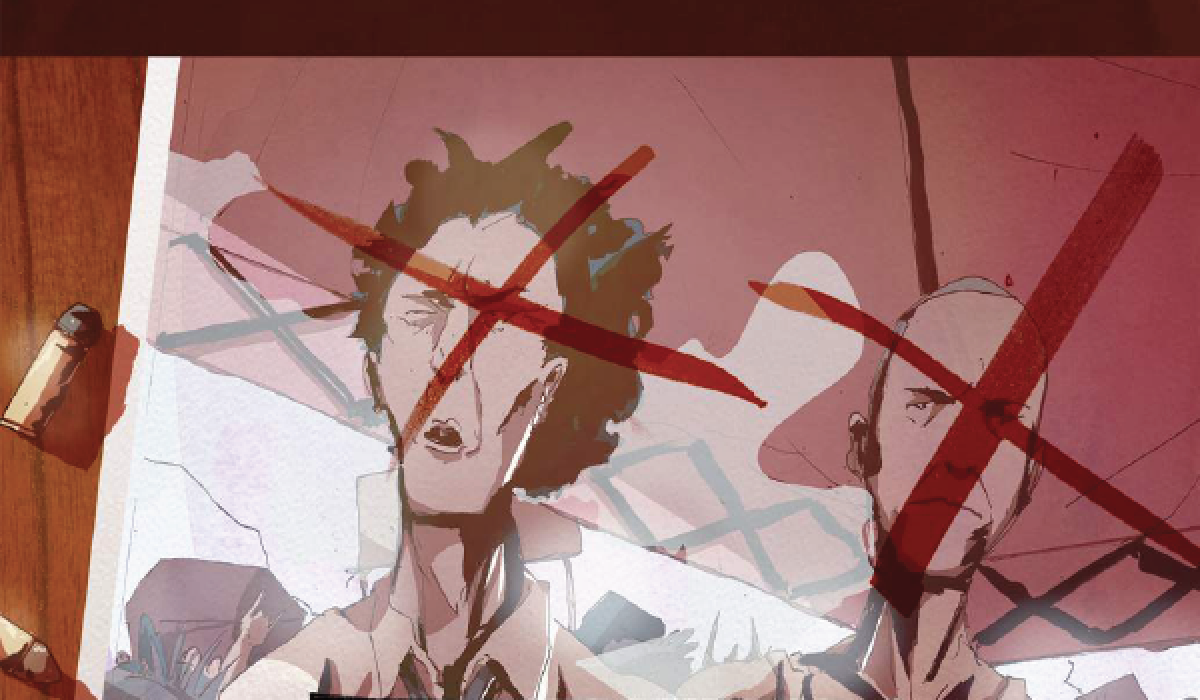 What struck me most about Sane6 is its page layout; each page is comprised of around fifteen rectangular panels, which slows down the action and makes things seem more cinematic when reading. The story of two criminals in a near-future California is interesting, but gets bogged down by exposition in the story’s second half. That being said, the funny moments are funny (especially the ones between Hyman and Mitch, the two thieves) and the action beats pack a punch (Mitch’s Die Hard-style stunt in particular.) The artwork paints everyone we meet with truly ugly features, I assume to mirror their less than perfect personalities. Sane6 is certainly intriguing, but it feels more like a complete story than the start of a much longer one. 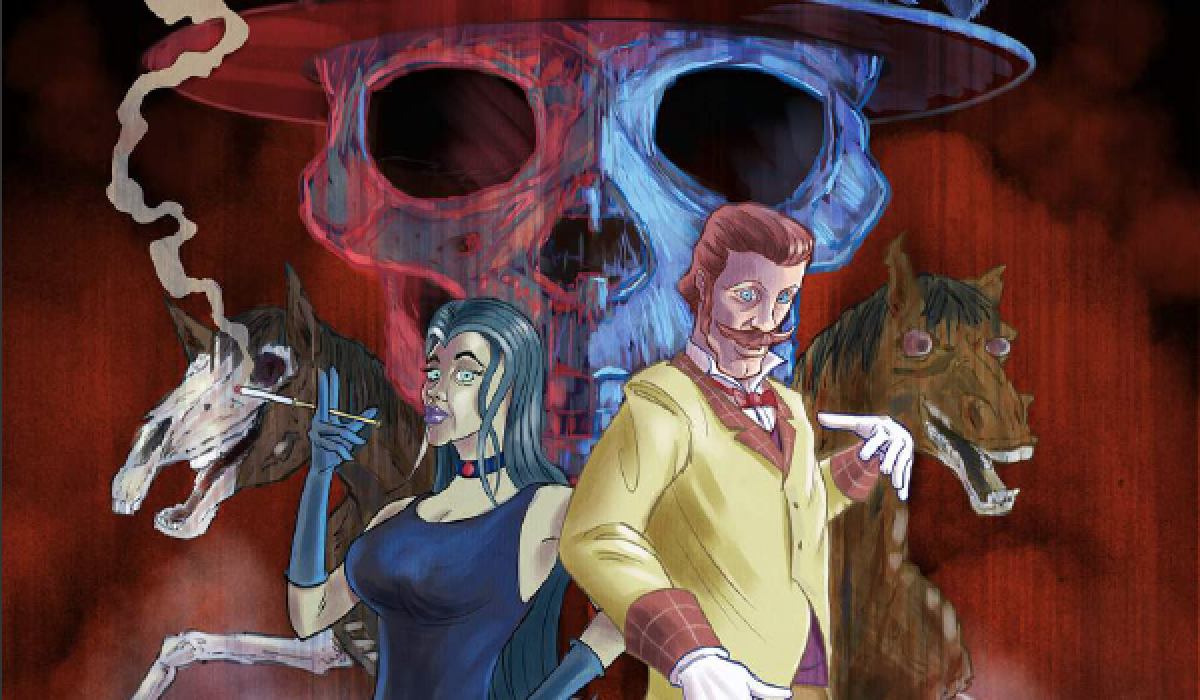 Right away we are thrown into my favorite environment of this collection: Darkhaven, a Victorian city where classic monsters and humans live along side one another. It’s like if Who Framed Roger Rabbit was mixed with The League of Extraordinary Gentlemen, great stuff! Detective protagonist Daversham Rex investigates the death of Mrs. Gray, wife of Dorian from Oscar Wilde‘s famous novel. He enlists the help of Dr. Frankenstein and his monster, Mary, as he uncovers the killer through a handful of twists. Daversham Rex does a superb job of integrating its monster and human worlds, considering how such a mix would effect everything from law enforcement to buying life insurance. The mystery itself is not very compelling (by the end, it almost seems like an afterthought), but it does a good job of keeping the story going and giving every character time to leave an impression. Overall, Daversham Rex solidly executes its episodic premise, more than enough for me to want to see this dark detective solve another case. 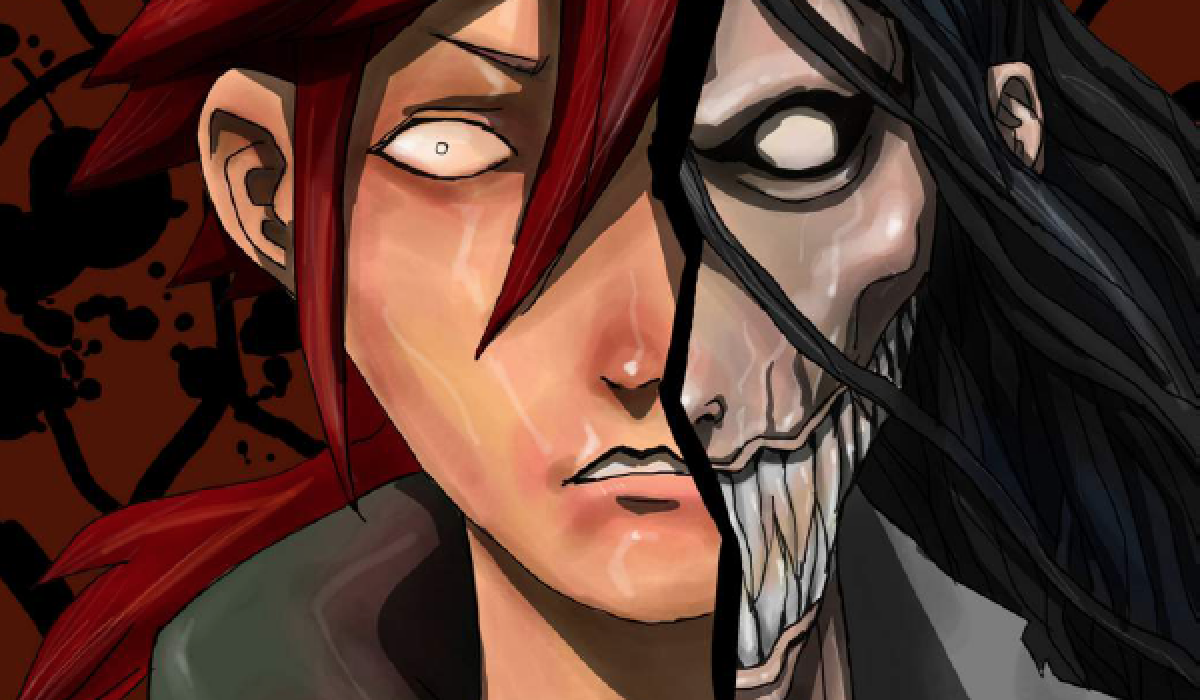 While I am sure that a lot of effort went into Sin‘s story, its artwork stopped me from engaging with it. Coloring the comic in black and white is a bold choice, but the overall artwork was just a little too cluttered for me to enjoy the read. Sin‘s narrative does not help much with engagement either, dropping us with little context in the middle of a dystopian fantasy world. There are science experiments, supernatural powers, armies battling it out, and maybe even zombies? Like I said, it is hard to tell. While there are plenty of areas worth exploring in Sin‘s narrative world, I can’t say that I am waiting for them to be told. 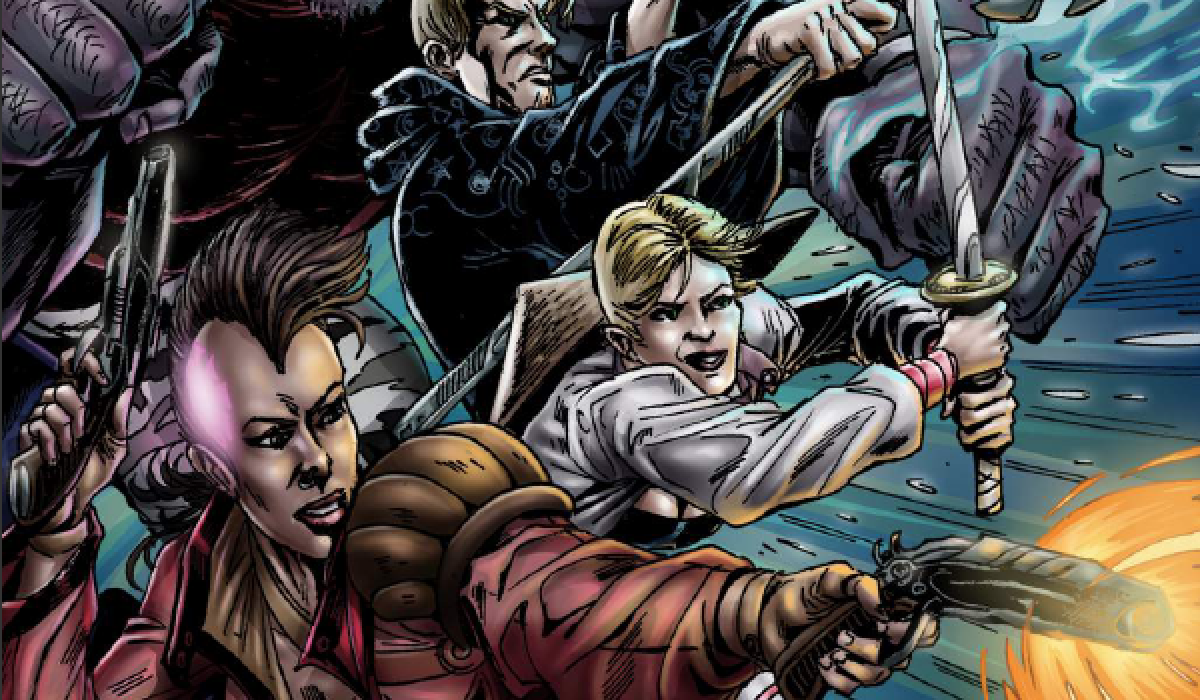 Escape Velocity is a lot of fun, very reminiscent of Guardians of the Galaxy, but with plenty of potential to branch out and find its own identity. We meet a band of space adventurers, led by the fearless Kyra, who plan to rob a gladiatorial arena to make up for their gambling losses. I am a sucker for any heist story, so it was great to see Kyra’s motley crew improvise as their plans fell through. The artwork by Tony Rodriguez and Angel Aviles is colorful and dynamic. It makes space interesting and full of life and also gives our seedy protagonists some much needed warmth. The cliffhanger ending of the story, showing a new world for the group to explore, is the perfect jumping off point for what I hope will be a great second issue. 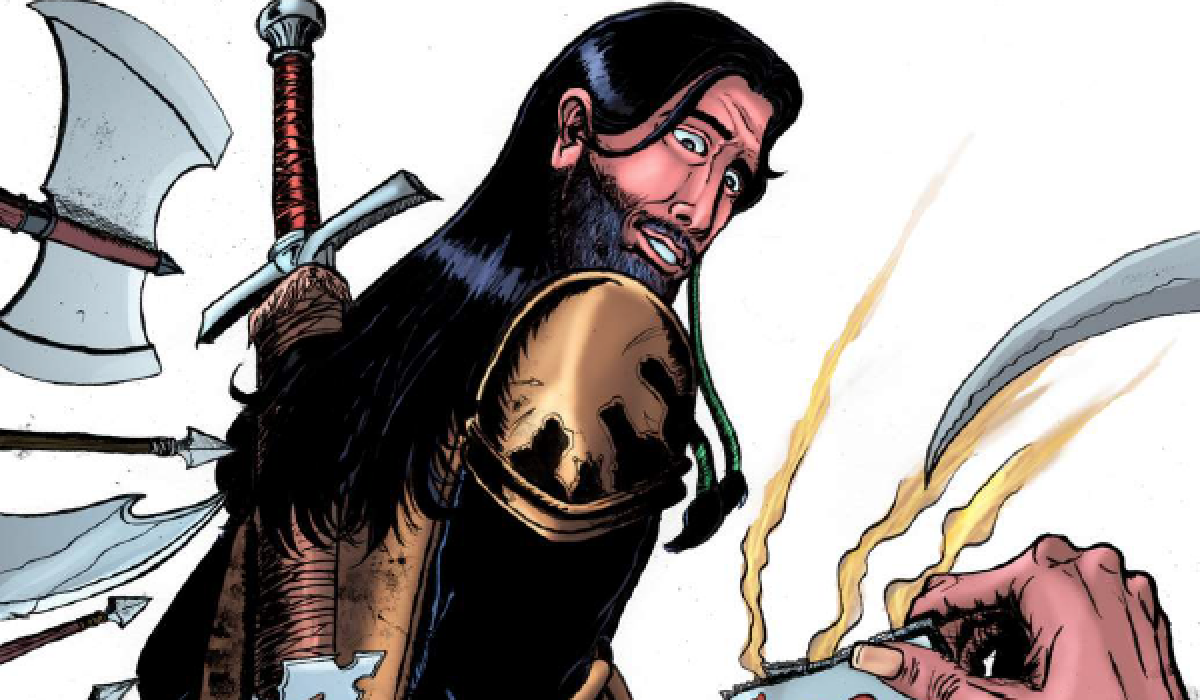 It’s always nice when comics are aware of the clichés of their genres and Free Lance does a good job of working with those clichés to tell a mostly funny story. A simple medieval tale of a mercenary saving a princess from a tower is upended by its protagonist, Free Lance himself. Lance is written in the vein of a Tony Stark or Ash from the Evil Dead films. He is a skilled swordsman and a clever fighter, but does not take his job too seriously. He makes things look effortless, but oh so entertaining to watch. The artwork is simple, as is the coloring by Nimesh Morarji, but very pleasant to look at. I only wish that the story’s ending were as clever as the rest of it, but unfortunately its mean-spirited joke fell flat for me. That being said, I would gladly read further stories on the strength of Free Lance‘s protagonist alone. 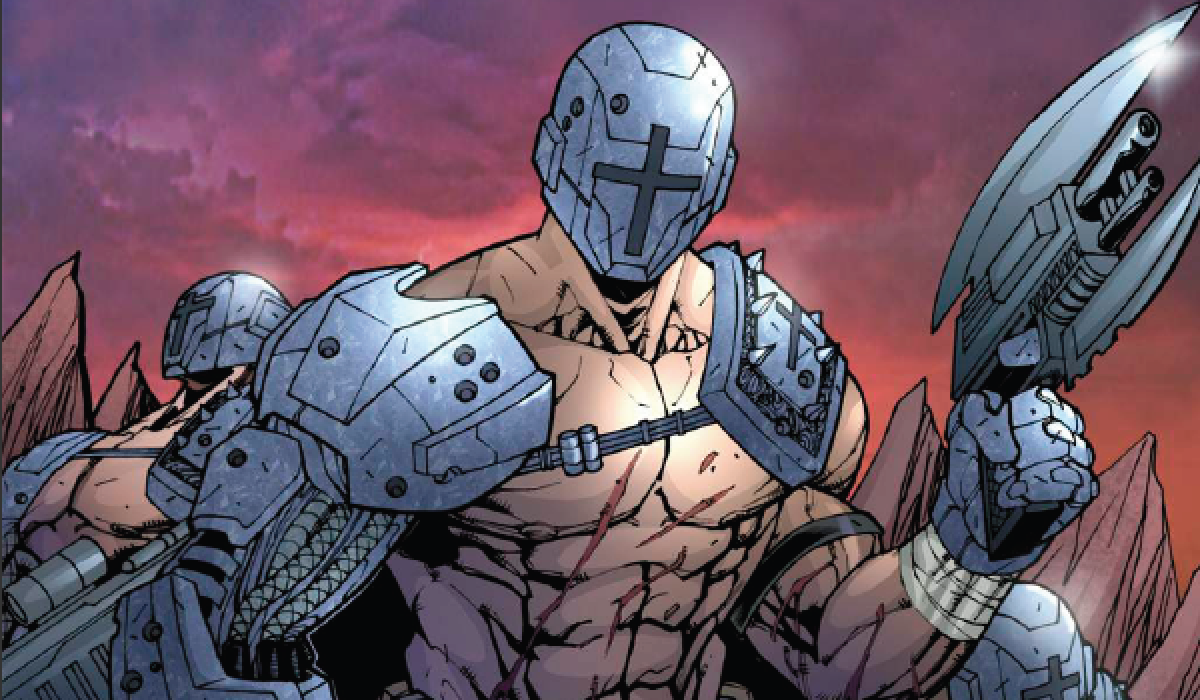 Astral Crusaders is a great concept with the potential for massive action scenes and complex moral ambiguity in its characters. The titular crusaders are space-bound colonial soldiers tasked with protecting human life around the universe. The comic makes no bones about labeling them as colonizers, nor does it white-wash colonialism as a practice and that is really refreshing to see. The designs of the crusaders’ suits by artist William Allen C. Reyes are a cool mix of sci-fi tech and historical aesthetics. Best of all is the violence in this comic, always drawn to be in the face of the reader. The violence here is appropriately unflinchingly horrific and paced very well. And for a comic that could have relied solely on its action to be worth the read, the ending of Astral Crusaders is surprisingly thoughtful and measured. It would be great to have more character development in future issues and to see where these crusaders go next. 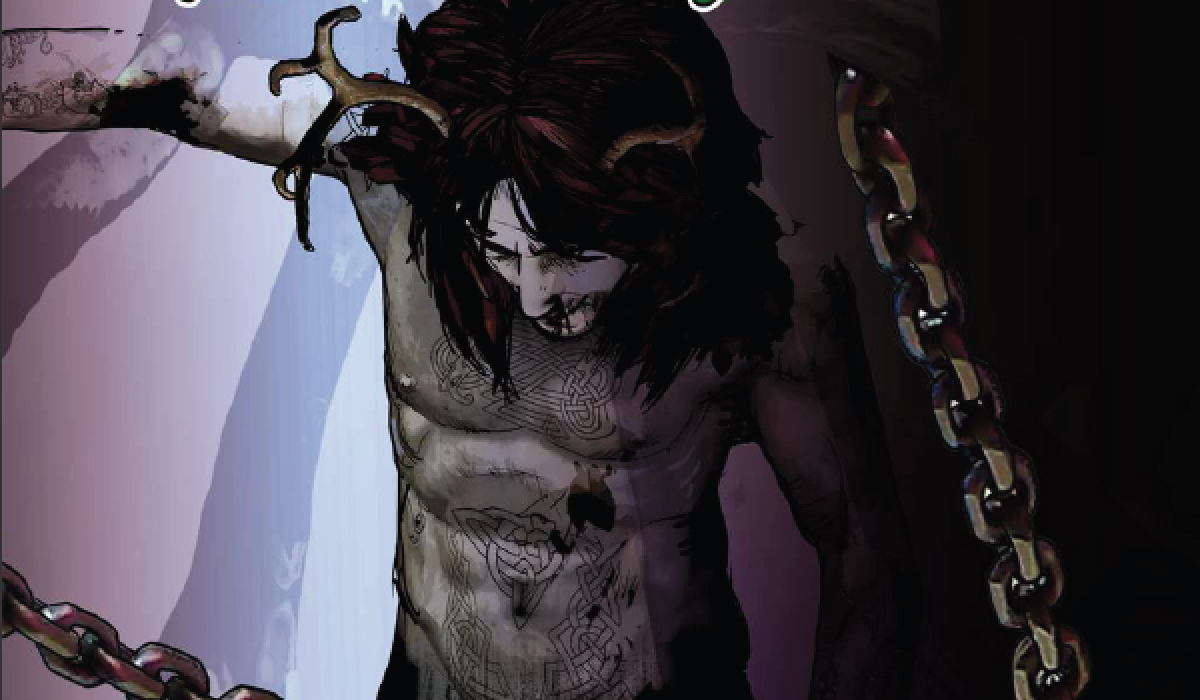 Lastly, we have Drust, a gothic fantasy story about an immortal demon cursed with hunting others of his kind. The story is on the whole unremarkable and heavy with exposition, though Drust’s internal monologue has a nice presence throughout. What stands out for me is the photorealistic artwork by Denis Vermesse. Light and shadow are beautifully depicted and the characters’ faces are impressively detailed. The backgrounds are excellent too and help a lot in creating Drust‘s medieval fantasy world. This story did not grab me as much as some of the others did, but I would be curious to read at least one more issue that kicked off a grander story arc for its demonic hero.

You can check out Octal Comics’ website here and read my review of Octal Vol. 2! What stories look good to you? What ideas would you pitch for a comic? Sound off in the comments or send us your thoughts on Facebook or Twitter!