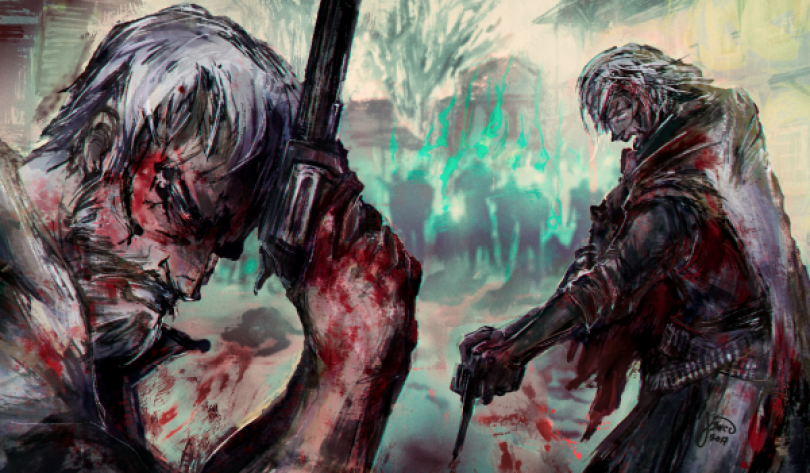 Westerns are a challenging genre to bring to life in comic form. Great writing and artwork are needed to bring out a Western’s dismal tone and sweeping visuals. But most important to the Western is the element of loneliness. In comics, it can be hard to show just how isolated a Western town is when pages must be filled with artwork, speech bubbles, narration text, sound effects, and more.

It is impressive enough that Grimwood Crossing Volumes 1 and 2 to tells a Western story this engaging, but to have that story organically integrate zombies, werewolves, and dark magic is kind of astounding. There is a lot going on in Grimwood Crossing, but writer Conner Bartel and artist Atagun Ilhan always keep the reader exactly where they should be. You can find the Kickstarter link for this comic here, as well as their latest campaign’s here. If Swords & Sorrows is anything like Grimwood Crossing, then we are in for a real treat. 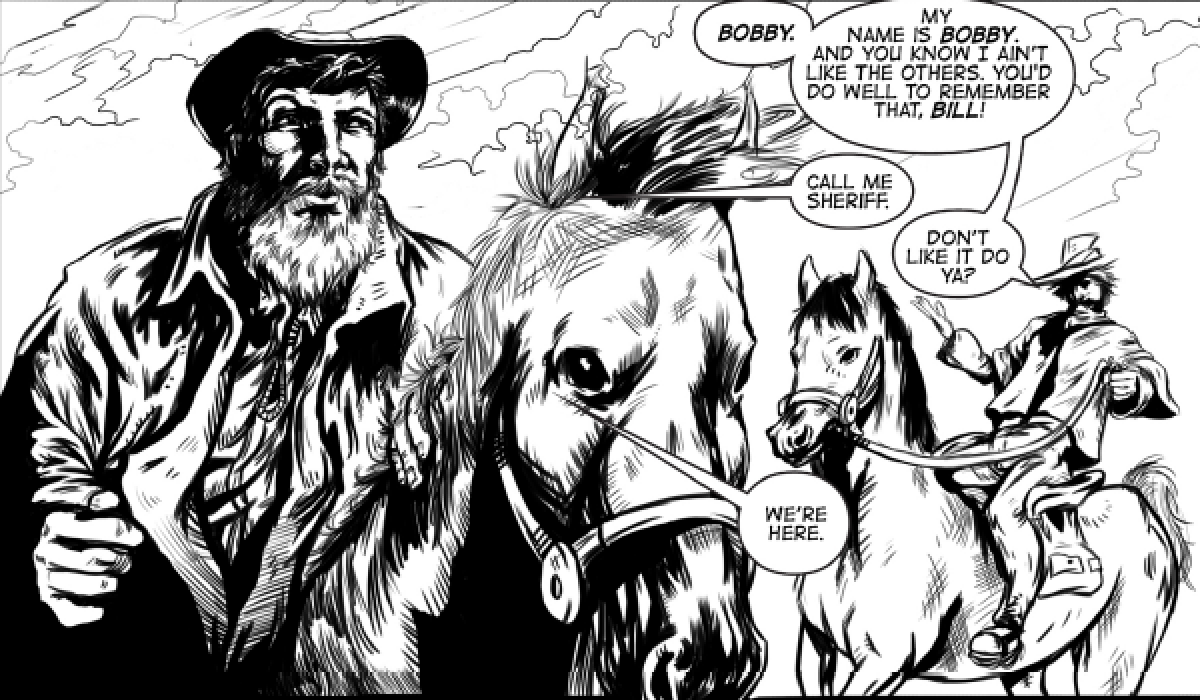 The story’s cold open shows a mysterious man leading a horde of zombies into a freight train car bound for Grimwood Crossing, the comic’s titular Western town. Bartel wastes no time building up suspense in the book, giving us an unknown antagonist and showing off how threatening these zombies are. Ilhan‘s artwork here, much like in the rest of the comic, is moody and dark. Even the next scene, which is brightly lit by full sunlight, still feels draped in the darkeness of the opening teaser.

Our protagonists are Sheriff Bill and his deputy, Bobby, who quickly raid a house full of vampires before riding back into town. The action is fast-paced and dynamic and keeps the comic’s horror edge alive. Once back in Grimwood Crossing, we get a sense of how respected and beloved Sheriff Bill is and, by contrast, how nobody thinks too highly of Bobby. The town is suspicious of the area’s Native American population (one woman blames them for the zombie outbreak), as eveyone waits for an incoming freight train. The comic does a great job of throwing a lot of possible plot points and potential new characters at the reader here- all to distract from the fact that this incoming train is the zombie-filled one from the opening! 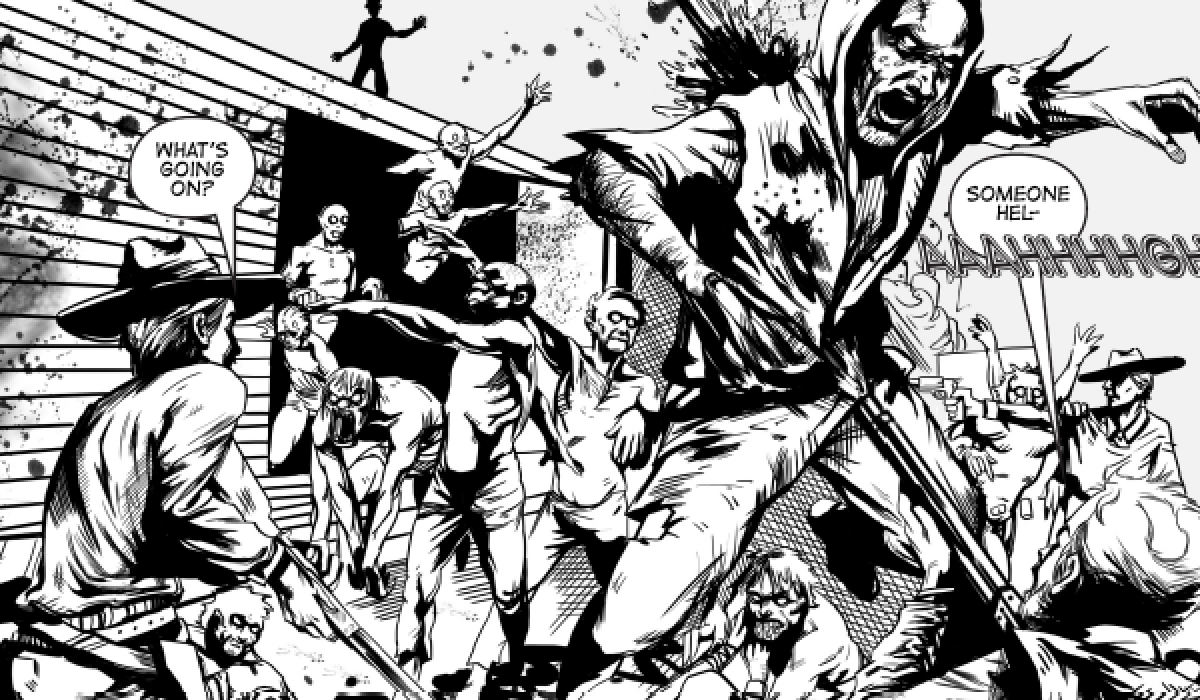 The zombies attack in a grisly splash page caked in a deep, black background. Once again, Sheriff Bill and Bobby spring into action, saving the day, but not without some casualties, namely Anna, a love interest of Bobby’s. Bill reveals that he knows who is behind this attack: Randy Greesley, father of a former apprentice of Bill’s, Ryan, whom Bill had to put down after a previous zombie attack. The weight of this decision still visibly haunts Bill and informs us about who he is as a character. And when Bobby must put down a soon-to-be undead Anna a few pages later, the moment is equally as tragic. This unforgiving world is very appropriate for a Western.

I do not want to give too much more away about the story, but there are a few more moments worth sharing. The identity of the man behind the zombie attacks is not as straightforward as Bill surmises and leads to a genuinely good twist and backstory reveal. Bill and Bobby relentlessly pursue this man throughout the next volume and a half, encountering several new characters and more magical threats. Adam the werewolf, a reluctant ally of theirs, is my favorite; the artwork of his transformation is equal parts scary and beautiful, and the reveal that he is actually a friend is one of the comic’s funniest moments. 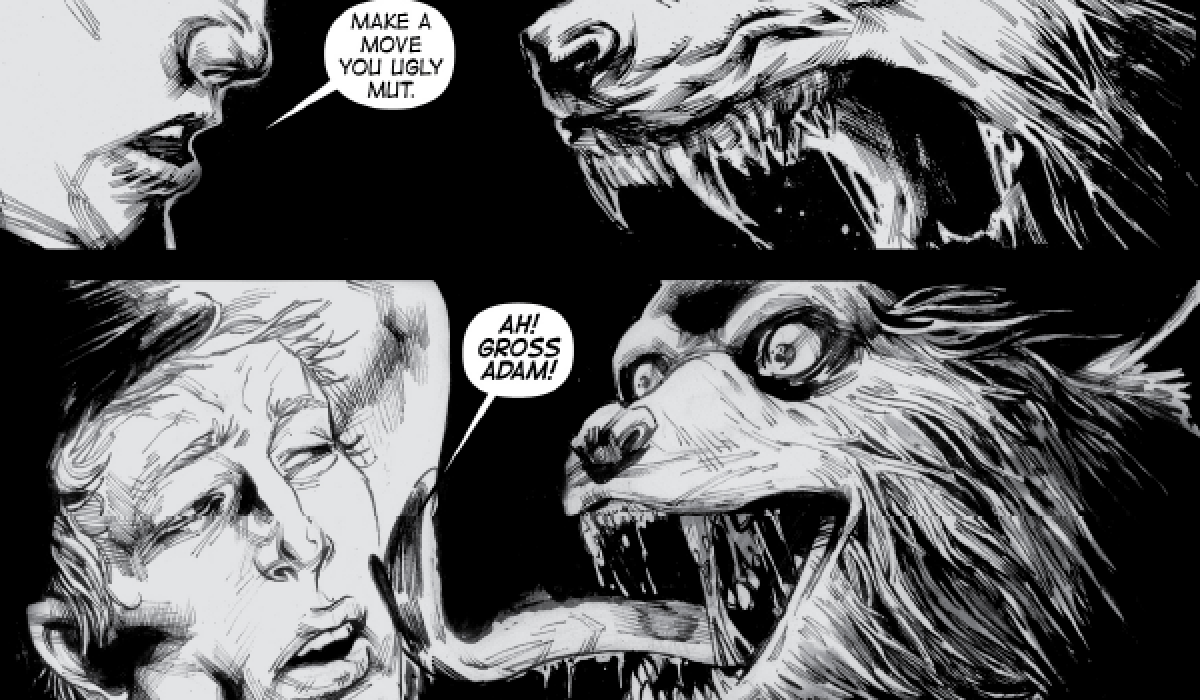 The cliffhanger ending between the two volumes is also well done, as is the ending of the story all together. It is a satisfying finale for a story that really builds up tension in its second half, when the true antagonist gains the upper hand and puts Bill and Bobby, not to mention the whole town, through some really tough stuff. One scene in particular gets a little too gore-focused for my liking and I think the story could have done without it; there could have been other ways to show the lengths Bill and Bobby will go for one another and to protect the townspeople. I could see an idea for a sequel story here, about who will continue to watch over the town, but as a stand-alone plot, Grimwood Crossing works very well.

Links to the Kickstarters can be found here and here! What are your thoughts about Grimwood Crossing? What Western comics have you read? Sound off in the comments or send us your thoughts on Facebook or Twitter!