Home » Complex Yet Heartfelt, Skip to the End Asks Vital Questions on Mental Health and Addiction 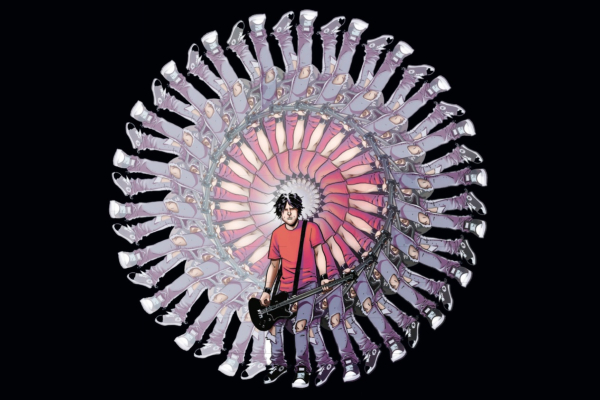 Any story that deals with themes involving drug addition and mental illness is worthy of consideration. They’re complicated issues that don’t produce simple answers, but for us to at least begin to talk about them sets us on a path of better understanding. That’s the mission Insight Comic’s Skip to the End has undertaken, it’s premise of a bass player from a famous 90’s grunge band winding up into an existence of drug addition after the suicide of the band’s leader channels a grim yet cathartic story.

Before we unbox the themes Skip to the End tackles, what’s readily apparent is the comic’s rather liberal cherry-picking of the grunge scene to illuminate its story. Samarsa, the band in question that Jonny soon spirals out of into his current lifestyle, is Nirvana in all but name. It’s curious then that our focus should be on bass layer Jonny rather than lead singer and guitarist Kirk, but perhaps that’s the point. Folks rarely pay attention to the bass player. From a narrative standpoint, that can’t help but make them invaluable for the fertile creator, they’re blank slates, waiting to have stories and character wrenched from them, something which writer Jeremy Holt exploits thoroughly throughout Skip to the End.

The story of Skip to the End is one of two halves, one focusing on Jonny and the other half on Emily, an addition counsellor who strikes up a bond with Jonny, but who has less than noble intentions. Where Jonny’s story is both clear and resolute, but not without its uneven elements. Chancing upon a guitar capable of time travel, Jonny uses it to venture, quite literally, into his past in an attempt to confront his demons. Cursed by countless thoughts of saving his friend from suicide, his journey is one of acceptance of a broken future, but also finding inner peace. The time-travelling guitar may not be the most subtle of plot devices, but it does enable Jonny’s story to unfold with a delicate pace and rewarding conclusion. 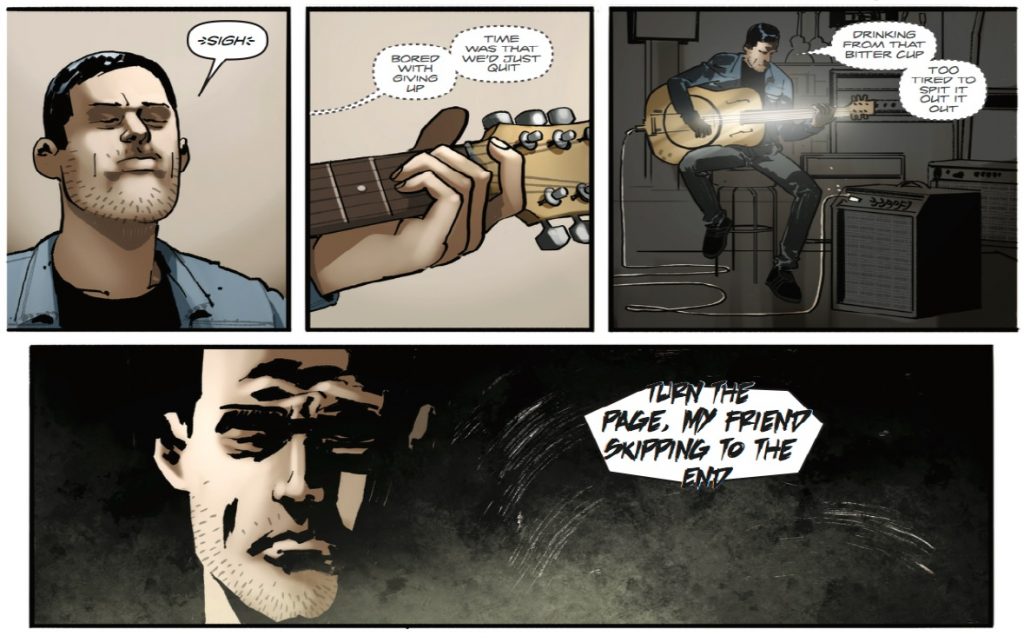 Conversely, Emily’s story has a distinct different flavour. A former addict herself, her gentle manipulation of Jonny gives her a vulgar flavour, whilst the revelation itself of her own additive past feels slightly tacked on. It’s springing forth out of nowhere clashes with the otherwise smoothness of Jonny’s own story, but ultimately, the two’s journeys work in tandem to better each other.

Also working in tandem are Alex Diotto‘s art and Renzo Podseta‘s colours. They concoct a tough, murky visual atmosphere for the story to inhabit that works well with its dark tones and complex ideas. Vibrancy isn’t left behind, however. The climactic confrontation between Jonny and Emily, in which Jonny makes use of his guitar one last time, has a visual poignancy to it that illuminates the end of their respective arcs. They also command an unflinching depiction of drug consumption and mental anguish throughout that’s quite engrossing. The cover itself, depicting a sickly-coloured Jonny hunched over his bass, whilst a rainbow-coated, deceptively vague incarnation of himself soars above him makes a lot more sense once you reach Skip to the End‘s conclusion. Does it encapsulate Jonny’s ascent into inner peace, or is it meant to call back to the more innocent days of Samarsa? The answer most likely lies in not knowing.

Skip to the End may bear an unbalanced narrative, but it mostly succeeds in what it attempts to accomplish. It’s not a perfect read, but then, how do you craft a perfect depiction of the cause, effects and resolution of drug abuse and mental illness? Skip to the End doesn’t feel like it’s trying to be perfect. Like it’s protagonist, it’s complicated and tough to unravel. It doesn’t need the right answers to ask the right questions.

You can discover more about Skip to the End from Insight Comics. Have you ready read it? Let us know in the comments section below or send us a Tweet!