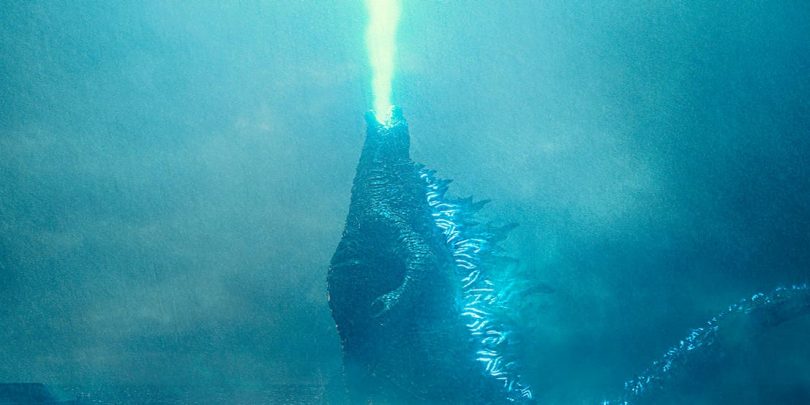 The MonsterVerse is a bit of an odd duck, having not arisen to the level of a “cinematic universe” yet. There has only been two installments so far since 2014, whilst the MCU has released twelve in that time. I am guessing Warner Bros. and Legendary are being a little more cautious with this franchise; waiting til Godzilla: King of the Monsters and Godzilla vs. Kong come out before making further plans. Seems like a sensible plan. Too bad Universal didn’t do the same thing with the Dark Universe, which was dead on arrival.

The first trailer for Godzilla’s 2019 sequel dropped during San Diego Comic Con. Talk about a showstopper. A jawdropping maelstrom teasing what is to be a monster mash for the ages. Though the trailer doesn’t really give much of a reason to see the film for the plot, it certainly does for Godzilla and friends. The film is being directed by Michael Dougherty, who has proven his craft with other monster films like Trick ‘r Treat and Krampus. A large complaint with the 2014 film, directed by Gareth Edwards, was a lack of attention on the monsters. Every single time there was build up to a monster brawl, it cut away in teasing fashion.

The sequel appears to be resolving this complaint, making each appearance from the giant monsters an event in itself. The glimpsing teases of Godzilla, Mothra, Rodan, and King Ghidorah in the trailer are tantalising awesome.

Judging by the trailer, the story will involve the world facing an extinction-level threat in the shape of King Ghidorah – a 500ft-tall, three-headed dragon that can shoot out lightning. There is a hint that old Ghidorah is from outer space in the film’s viral marketing, as he is in the Toho films. Or it could have been a manmade distaster. It’s a little vague.

Most of the human cast appear through reaction shots with various levels of fright. Vera Farmiga plays a Monarch scientist named Dr. Emma Russell, who claims mankind is facing their destruction. The only hope to survive are the “Titans” – the new terminology for the Kaiju – specifically, Godzilla, Mothra, and Rodan. Or possibly just the first two. It’s a little vague on what Emma is getting at.

Theories suggest King Ghidorah is the main threat, capable of generating super storms that could wipe out the whole world. Godzilla, Mothra, and Rodan must be brought together to defeat the dragon. This reminds me a little of All Out Monsters Attack, one of the later Godzilla films, with a similar premise. Emma Russell has discovered a way to communicate with the monsters, perhaps even able to control them. This leads to her, and her daughter Madison, played by Millie Bobby Brown, being kidnapped by a sinister organization led by Charles Dance. Why? Presumably to harness Emma’s newfound discoveries related to the monsters.

Ken Watanbe and Sally Hawkins are back to reprise their roles as Dr. Serizawa and Dr. Graham, hopefully to provide more than exposition. The trailer focuses primarily on Millie Bobby Brown, and there are one or two moments that just scream Stranger Things. Rumours say Brown’s character will have a psychic connection to Mothra. Please don’t start typecasting Brown in the same role. Still, it looks like she will be the main human focus in the movie, having bonds with both Godzilla and Mothra.

Speaking of which, let’s talk about the American debuts of Godzilla’s long-time cohorts. Godzilla probably got more screentime in this trailer than he did in the 2014 film. His iconic atomic breath will be used more in the film, since it appears whenever Godzilla is on screen. Godzilla looks physically bulkier than when we last saw him, and will need to be when up against the cream of the Kaiju crop.

Rodan is a staple of the Toho films, acting as an on-and-off rival to Godzilla. Rodan was a giant red pteranodon who could fly and that was about it. Here, they turned Rodan into a flying eruption. In dormant slumber in Isla de Mona’s active volcano, Rodan eruptive awakening sticks out in the trailer. His wings seem to drip with magma, and he can flatten entire cities just by flying over them. Merely flapping his wings can cause a sonic thunderclap. Rodan can also be seen taking on fighter jets over a ruined Washington DC. When will the military learn that they can’t win against giant monsters? Period!

Next, we have Mothra, definitely the third most iconic giant monster after Godzilla and Kong. Mothra will go through a multi-formed transformation, appearing as a larva, and then in her winged form. My favourite moment in the trailer had to be when Mothra spread her wings to full length. There was something just majestic and magical about it. It’ll look amazing on the big screen. Mothra is described as a goddess, and appears to possess an ability to emanate powerful rays of light. Mothra had been described as a benevolent being, so she and Godzilla will be on the good side.

And, finally, we have King Ghidorah, aka, Monster Zero. By far the biggest and fiercest monster, Ghidorah towers over puny Godzilla. He stands at 521-ft tall, and his wingspan is so huge, the viral Monarch website can’t measure it. We glimpse Ghidorah throughout the trailer, seeing he is frozen in Antarctica, though it is inevitable that he will be thawed out. In fact, we see his power throughout the whole trailer. Powerful storms and yellow bolts of lightning are causing mayhem around the world. Clearly, Ghidorah will be a threat to behold.

I think what really makes this trailer so awe-inspiring is the sense of scale, and use of music. Dougherty knows how to make monsters look frightening yet wondrous at the same time. From Rodan bursting out of the volcano, Mothra stretching her wings, to the thunderous tease of Ghidorah, the trailer is phenomenal to watch. Charles Dance then wraps it all up with a line only he could deliver straight-faced in a monster flick – “Long live the King.” The film will likely come down to a brawl between Godzilla and Ghidorah for that title.

What were your thoughts to Godzilla: King of the Monster’s first trailer? Did it blow you away, or did it have you groaning about it just taking inspiration from Stranger Things? Leave a comment below or on our Twitter feed.