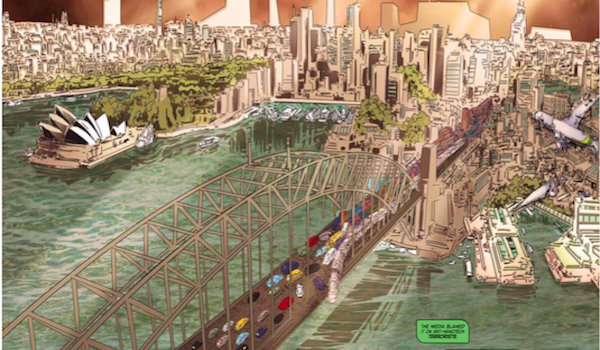 The Resurrected #1, written by Christian Carnouche, promises to be an exciting science-fiction tale. By opening with two pages depicting the history of colonialism in Australia, this comic grounds itself in the experience of oppression. Other relevant themes appear over the course of the story, such as the questioning of the power of large corporations, all serving to create an atmosphere of a recognizable world, albeit a future one. Hopefully, future issues will continue to keep these elements connected with the developing story.

The plot is mostly an introduction to a world recovering from disaster. After an explosion of nanobots, Australia has been left uninhabitable. There are also “Rezzies”, or resurrected people, running around, although what this resurrection entails is not yet explained. The focal point for all of this is Detective Cain, an Aboriginal-Australian working for the United Nations, the survivor of a family destroyed by the disaster. Cain’s past haunts him mentally and physically as a number of converging influences threaten to upend his world once more. A good sign for the direction of the series is that despite the science being thrown around, the characters’ emotions and personalities are always at the forefront.

The art, by Crizam Zamora with colors by Salvatore Aiala, is at its best in these intense emotional scenes. There are wonderfully fluid flashbacks which capture the instability of memory well. Despite taking place in a populated city, each location feels unique yet integrated, and the contrasts between different locations works to make the world feel bigger. There is an artistically confusing scene near the end of the preview, involving an action sequence, but other than that, the art remains consistent and solid. One excellent element of the art is the way the cramped nature of many shots relates to Cain’s emotional state throughout the issue.

As the beginning of a series, The Resurrected‘s first issue presents its readers with a lot of information over a short period of time. Some of this information is exposition, some of it world-building, and some of it is character-based. Good science-fiction rarely relies on baffling readers with information about its setting which its characters inherently know. While Carnouche’s writing can be vague, it is clear that he intends for a larger mystery to drive the plot, allowing his characters and his readers to discover the truth of the world together.

Overall, The Resurrected‘s first issue is a strong start to a sci-fi mystery with relatable themes and questions for today’s word. The protagonist is a sympathetic figure, for whom the stakes are both personal and global. The villains are mysterious and the corporations shady. This is a series whose future instalments promise intrigue and excitement.

You can discover more about The Resurrected from Carnouche Productions and Comixology! If you’re a fan of the series, sound off in the comments or send us your thoughts on Facebook or Twitter!