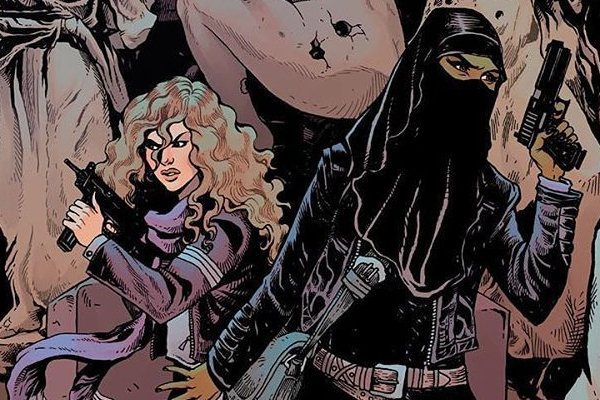 The rules of the anthology game state that you never quite know what you’re going to experience when turning that first page, and Comichaus, the flagship anthology of the app of the same name, is no exception to that rule. Past issues have dived deep into strips, both ongoing and one-shots, that boast some wild flavours that deliver diverse results. Where the rattling punches Comichaus likes to throw often result in some quality material, #6 has a gentler impact than past editions. This boils down to strips that are either lacking in quality all together, or strips that rely on atmosphere more than the tangible.

The ongoing strips Chalk, Feather and Cold are the strongest offerings of #6. Chalk in particular continues to exploit the anthology format of the comic with hearty aplomb, even if that means its deliberately wonky narrative is difficult to endure. Much of the strip’s latest chapter is without words, relying more on visual thrills. Having established the cryptic yet fraught relationship of the time-hopping Jacqueline and Iblis, we’re thrown back in time from the present day to the 1880’s. Here, the strip draws forth its visual prowess, as the two ex-lovers grapple with a demonic skeleton that promises to wreak havoc in future issues.

By flinging the reader back into Chalk’s narrative past and introducing further plot elements, Chalk galvanises its complexity in story-telling. The constant zig-zagging ensures the reader is kept on their toes. Were it not for Steve Horray‘s tasteful art and knack for engrossing stories, Chalk would be a muddled read. As such, it stands as an enthralling affair, and is a definite high-point for Comichaus.

Feather is the most raucous strip in this issue, this sixth instalment bringing the apocalyptic strip to a riot of a finale. Estranged couple Sandy and Doug are flung together one final time when the mutated, half-bird-man Doug visits his housewife-turned resistance fighter Sally to warn of an impending invasion. Tying the events of the past five instalments together, Doug and Sally’s relationship finds some welcome closure amidst their angst-ridden story as Doug promises a safe future for their child. It’s a hot-footed manner of ending their story, but watertight in its execution.

Cold is in danger of overtaking Chalk as the most oddly cryptic strip Comichaus has included. Lyndon White‘s artwork is deliciously more vague than Steve Horray‘s taught, clearly defined black and whites. Cold binds together the apocalyptic scale of Feather with the ghostly charm of Chalk. Where Feather uses devastation to end its story, Cold takes advantage of devastation to begin its own affair. The unfortunate Carly appears to be the only human being immune to a world where people are erupting in a frenzied state of frozen zombies. It’s one of the strip’s gentler reads, its oddly clam nature bolstered by Simon Birks‘ subdued story-telling and White’s subtle art. A strip to keep track of, I think.

Mandy the Monster Hunter is the weakest strip here, this particular chapter stranded by bouts of exposition, but its continued innocent, all-ages tone strip conflicts with the majority of Comichaus‘ content. Nevertheless, it still manages to pack in an effortless, if not wholly original quick-paced nature. New addition Mia tears away any sense of ethereal charm with a rapid firepower story of gangsters, runaways and shoot-outs. Matching Chris Robertson‘s tearaway script is Richard Macare‘s minimalist art, lending the strip a sharp immediacy. Closing out #6 of Comichaus is the enjoyably daft one-shot Tipples in Times, a strip that’s not exactly substantial, but reminds us that Comichaus is equally suited to pulling off single stories as well as multi-parters.

Comichaus #6 is split between delivering some spine-tingling moments of quiet horror and more traditional, blitzkrieg action. The dips in quality and hyper-active pacing in certain strips make it a more awkward issue to follow than past, but it doesn’t damper Comichaus‘ ever-growing identity as an enjoyable comic.

You can discover more about Comichaus #6 from their online store. Comichaus will be also be exhibiting at this year’s Thought Bubble Festival. You can also pre-order their latest issue, #11. Are you a fan of Comichaus? Let us know in the comments section below or send us a Tweet!