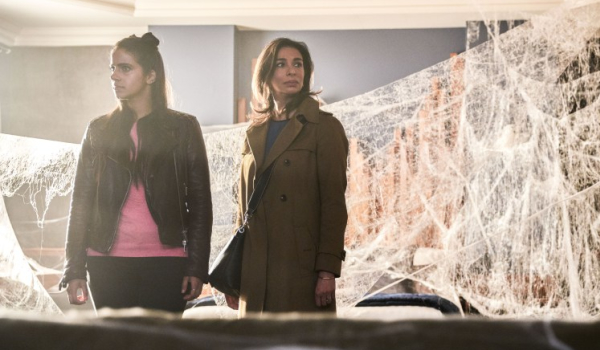 After last week’s civil rights tightrope, Doctor Who is back on more familiar ground for “Arachnids In The UK”.

After an unexpected trip into space and a pop back in time to 1958, the TARDIS finally makes it back to contemporary Sheffield. The Doctor seems glum at the prospect of saying goodbye to her new companions – fam? pals? – but first to stop oversized arthropods from webbing up the neighbours.

Giant spiders. Spiders in Sheffield (which you’ve got to assume was the episode’s working title, right?).

Doctor Who has a storied history of out-sized creepy crawlies, most notably in Planet Of The Spiders, Jon Pertwee’s regeneration story; the era from which Chris Chibnall seems to have taken much of his inspiration. Case in point: the evil  American businessman, Jack Robertson, played by Chris Noth (AKA Mr. Big AKA the philandering husband from The Good Wife). He owns a chain of hotels, his personal brand is very much gold based, he takes pleasure in brusquely telling people “You’re fired”, and yep, he’s thinking of running for President. He’s not Trump, though (or Ed Sheeran) – in fact, he hates that guy! (Trump, not Ed Sheeran.)

“Arachnids In The UK” is standard monster-of-the-week fare, but what exactly is the monster – or who? The Doctor seems genuinely concerned for the wants well-being of these overgrown common or garden spiders whereas Jack Robertson just wants to shoot them. Then again, if they will insist on bursting through the fixtures and fittings.

Still coming into herself, Whittaker’s new Doctor is socially awkward when not in crisis mode. Also, unlike her immediate predecessor, positively grateful to be invited in for tea; though she does still have a penchant for name dropping historical figures in unlikely situations – this week, Amelia Earhart gets a look in.

Meanwhile, Chibnall continues to develop and explore the dynamic of team TARDIS and their loved ones; giving some time to Yaz (Mandip Gill), for once, and her, conspiracy-theorist dad (who makes terrible pakora), her barbed, playful antagonism with her sister, and her recently sacked mum, who seems confused about Yaz’s relationship with the Doctor – are they dating? Then again, the Doctor isn’t 100% on that herself.

Chibnall continues to blend elements of both Davies – council estates! – and Moffat – scary cobwebs! – while bringing in more studied dramatic elements. Graham’s (Bradley Walsh) brief, mundane conversation with the late Grace (Sharon D Clarke; a lingering presence in the series), shot sensitively in soft focus by director Sallie Aprahamian, is genuinely moving. As is Graham’s growing bond with stepson Ryan (Tosin Cole), who seems to finally be coming around to the idea of him as “proper family”.

And all of this in the midst of a sneak conservationist message – another staple of the Pertwee Era – involving spider carcasses, toxic waste, and disused mines. Well, it is Sheffield. Maybe if more environmental parables cribbed notes from Arachnophobia’s we could get the real President of the US to pay attention. Then again, I can’t imagine he’s a big fan of grunge music; though it certainly seems to be effective in attracting spiders.

My one disappointment with “Arachnids In The UK” was the lack of a payoff: the real villain of the piece kills the biggest spider, which is dying anyway with a pearl-handled revolver, utters a few words of callous self-justification, and promptly vanishes from the narrative. It may be a damning statement on the lack of accountability on the world today – staunch bodyguards and guilt-ridden assistants get webbed up and snacked on while Robertson survives – but it doesn’t make for much of a climax.

Then again, the episode succeeds resolutely in re-imagining the time vortex as a vast purple-black honeycomb of shifting tunnels, crackling with orbs of energy like Christmas lights; the TARDIS spinning perilously through it. Time travel, the act of, seems thrilling and dangerous in a way it never has before.

This is a new, dynamic Who, light on its feet, inventive but not portentous – comfortably balancing serious topics with pure escapism as an antidote to grief or just the mundanity of life. “Arachnids In The UK” is lightweight, throwaway, but it might have kids taking a closer look at the cobwebs in the corners. What more can you ask than that?

Are you a fan of creepy crawlies in Doctor Who? Let us know in the comments section below or send us a Tweet!