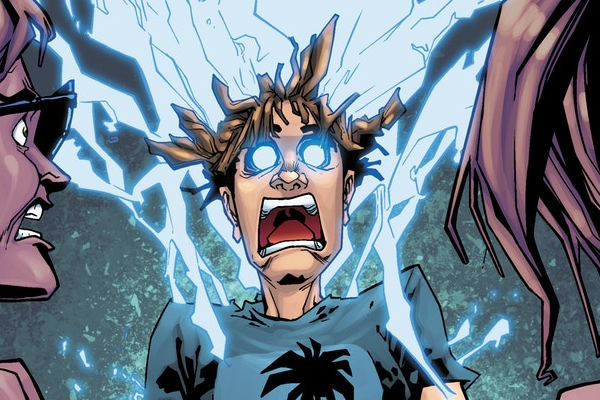 Action Lab‘s Nicole D’Andria knows a thing or two about comics. She regularly edits their comics and currently writes episode adaptations for the TV incarnation of Miraculous: Tales of Ladybug and Cat Noir. She’s now creating her own comic, Road Trip to Hell, and the first issue of this ongoing series, The Devil is in the Detail is currently crowdfunding on Kickstarter.

Fusing together horror, action, adventures and comedy into a vibrant package, Road Trip to Hell tells the story of Francis’ unexpected discovery that he’s the son of the Devil, and just about everyone from Hell is keen to kill him.

We caught up with creator/writer Nicole to find out more about the comic!

A Place To Hang Your Cape: Where did the idea for the comic come from?

Nicole D’Andria: I’ve always liked the idea of nature vs. nurture, and I loved the idea of what I felt was the ultimate nature vs. nurture story: will the son of Satan be our savoir or the most horrible being that ever existed? The series grew from that idea, and I had a lot of fun developing the character of Francis, the devil’s son, into a relatable guy with the fate of the world seemingly on his shoulders.

AP2HYC: How did working with horror, action and comedy work? Do the genres work well together?

D’Andria: I love mishmashing elements of genres together. For an epic road trip to Hell, I felt this mixture perfectly added to that chaotic feel. Plus I love when horror and comedy go together. People compare the two more often than you would think–you try to get a laugh with one and a scream from the other. Hopefully you’ll get both while reading Road Trip to Hell! Plus the story deals with some very dark themes, and I felt the comedy would help alleviate the darkness threatening to bog down the story. And it’ll make those intense, dark moments much more impactful!

AP2HYC: Our plucky hero Francis goes up against some familiar real-world figures. Is it challenging for you, as a writer, to work with such a gargantuan scope of action?

D’Andria: I always love a challenge! I did extensive research on the Bible and historical figures specifically for this project and had a lot of fun learning about the world I was planning on tearing apart with the series. The series also isn’t all action. While there are some intense action-packed scenes, a big part of the series is how the characters interact with each other, especially Francis, his sister Star, his guardian angel Joan of Arc and to a lesser extent, the demon Baphomet.

AP2HYC: What can readers expect from this first issue?

D’Andria: This first issue will introduce you to Francis and Star, who are living their less than typical lives, when the world comes crashing down around them. Readers will get to see Francis learn about his legacy and begin his journey… plus face off against some pretty intimidating odds! 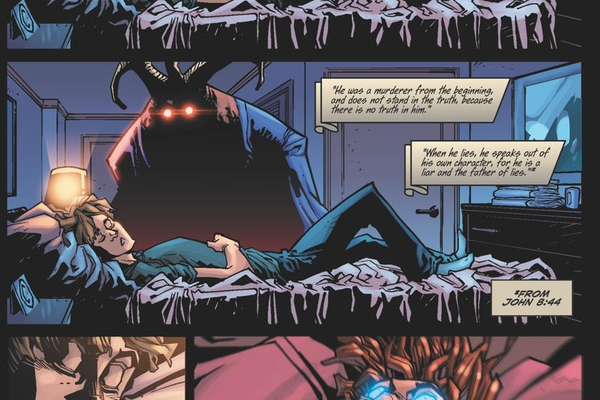 AP2HYC: This is your first creator-owned project. What’s your own background in comics?

D’Andria: I’ve been loving comics since I became an intense comic book collector when I was a teenager. I currently work as a Marketing Director and Submissions Editor at Action Lab Entertainment, so I’m extremely familiar with the comic book industry. I regularly manage and edit many of their series, including their award-winning title Princeless, the spin-off book Raven the Pirate Princess, and most of the Danger Doll Universe books. Plus I help co-write the ongoing DollFace series and adapt episodes of the TV show Miraculous: Tales of Ladybug & Cat Noir to comics.

AP2HYC: Road Trip to Hell has a very sharp yet exaggerated appearance. What was it like working with colourist Joaquin Pereyra and penciler/inker Marco Maccagni?

D’Andria: They were both amazing to work with and it was that exact style you mentioned that I wanted to have for the comic. I love the exaggerated expressions Marco creates, which really help add to both the intensity and comedy of the comic. Then there’s Joaquin’s colors that pop off the page and highlight the action.

AP2HYC: What’s your vision for Road Trip to Hell beyond this debut issue?

D’Andria: I can see Road Trip to Hell becoming an epic multi-volume series that will follow a grand transformation among all the main characters. I’ve already written the scripts for issue 2 and 3, which will contain the rest of volume 1, and I plan on having the creative team get to work on the art for the second issue shortly after the Kickstarter for issue 1 ends.

AP2HYC: Do you have any other projects in the pipeline?

D’Andria: I have more ideas for creator-owned series, but I’m mainly focusing on Road Trip to Hell when it comes to the creator-owned stuff. As for my other projects, I’m going to continue co-writing DollFace for as long as they want me. I’ve also been working on a book collecting interviews I’ve done with Kickstarter creators, which (fingers crossed) will be finished by the end of the year. It’s sort of an experiment to see if anyone would be interested in something like that, and depending on how it goes, I may do more with it. But I always have comics on the brain, so I’m always looking for a comic-related project to tackle!

You can discover more about Road Trip to Hell via its Kickstarter campaign. Have you already backed it? Let us know in the comments section below or send us a Tweet!