Home » Showcasing the West Midlands: In Conversation with Off The Mark’s Richard Rudge 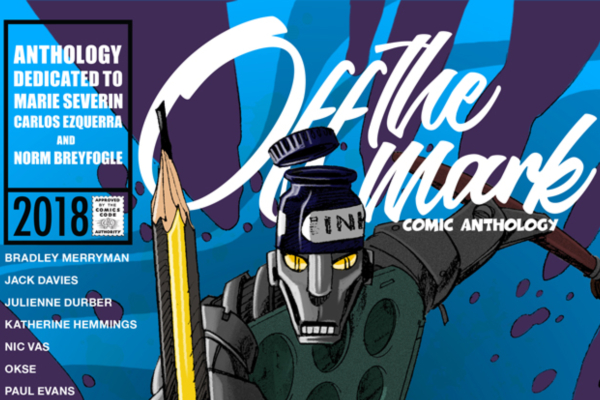 The West Midlands offers a diverse platform for independent and small press comic creator to showcase their work, with conventions such as ICE Birmingham, Leamington Comic Con and the Birmingham Zine Fair. Now, a new anthology promises to widen that that platform for creators. Off The Mark, currently crowdfunding on Kickstarter, gathers together 14 writers and artists brought together thanks to the Comics Creative Catalyst, an outfit dedicated to giving emerging creators opportunities for their work.

We caught up with contributor to the anthology Richard Rudge, who reveals the working process involved in making Off The Mark.

A Place To Hang Your Cape: Where did the idea for an anthology of creators from the West Midlands come from?

Richard Rudge: Off The Mark was created as part of the Create the Break comics art course run by John McCrea and Laura Howell.

As students on the course the 14 of us have put the anthology together as a way to showcase our work, what we have learnt from the course and progress we have made as artists and creatives.

AP2HYC: Anthologies guarantee a diverse array of creative voices. What stories does Off The Mark contain?

Rudge: With a fairly loose theme we’ve be able to create quite a varied collection of stories.

For example Okse has create as story about superheroes who still live with their parents, Julienne Durber has a crime thriller telling the aftermath of a diamond heist, Snod’s story is about children going into another world inspired by their own toys. They range from stories created from personal anecdotes to reactions to the world around us.

It’s a real showcase of the skills and imagination of the group.

AP2HYC: Is there a narrative/visual theme to the anthology?

Rudge: Each story features a pen in some way – anything from an incidental item to the central theme of the story. The artist’s wanted some freedom in the stories we wanted to tell so the theme was kept very light for the anthology. I think it adds a fun aspect to the book as you’ll see how a pen is tied to each story in a unique way

AP2HYC: What was it like gathering the creative staff together?

Rudge: In terms of working on the anthology and Kickstarter, we all chipped in where we had expertise because we are a diverse group we had various levels of experience with comics and putting a book together. We’ve learnt from that just as we have from John and the other lecturers directly teaching us.

And because we’re being taught by artists with such as wealth of experience, we had great advice when the group had a problem or disagreement over anything regarding putting the anthology together. 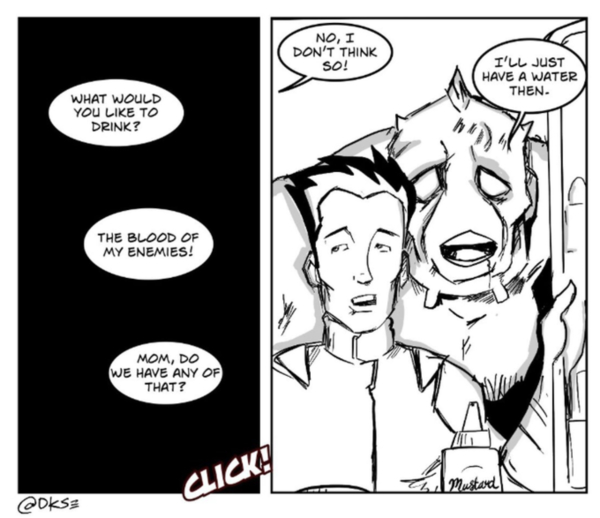 AP2HYC: Why did the anthology’s creative staff wish to get involved?

Rudge: For me, taking part in the art course was too great an opportunity to miss. It’s not often you get routine advice and critique from such experienced artists. I felt it was just what I needed to see what I needed to improve upon and what techniques I had available to me to do that. As for the anthology I think it’s a great way to showcase what the group as a whole has learnt from the course.

Julienne Durber (artist): As a keen amateur artist the opportunity to be taught by such comic greats as John McCrea, Dave Gibbons, Mark Farmer etc with a view to developing my work to a professional standard was too good to pass up. The anthology is the perfect way to show what I’ve learned and also make contacts with like-minded artists whom I hope to work alongside in the future.

AP2HYC: How is the comic scene in the West Midlands? Is it a vibrant community?

Rudge: It’s interesting because when you mention you’re from Birmingham or the West Midlands, they probably wouldn’t think of the arts, and more likely industry, manufacturing, stuff like that. But we have so much!

I would say Birmingham has a vibrant comics and arts community. Nostalgia & Comics has been a mainstay for Midlands comics fans since 1977.

There are plenty of community run events around the city such as the Birmingham division of Laydeez Do Comics and Drink & Draw events often in the Birmingham Art Gallery.

There are some great, both new and long running comic cons such as Leamington Comic Con, ICE Birmingham and the twice yearly MCM Birmingham shows. Along with the recently revived Birmingham Zine festival I think the art community are filling in the gaps in between what the larger events fill.

I think the vibrancy and diversity of that community is well represented by the comics in the Off The Mark anthology.

AP2HYC: What message do you hope to promote with Off the Mark?

Rudge: This anthology is our group’s way of coalescing our collective talent and showing it to the world, showing what we are capable of. What we have learnt from the Create the Break art course. What the medium of comics is capable of and saying “Here we are, this is what we can do”. I think the name the anthology, Off The Mark, fits very well with that. We’re 14 amazing artists, we can create incredible work, and we’re just getting started.

You can discover more about Off The Mark on its own website, but you’ve only got a few days left to support the Kickstarter! Have you already backed Off The Mark? Let us know in the comments section below or send us a Tweet!