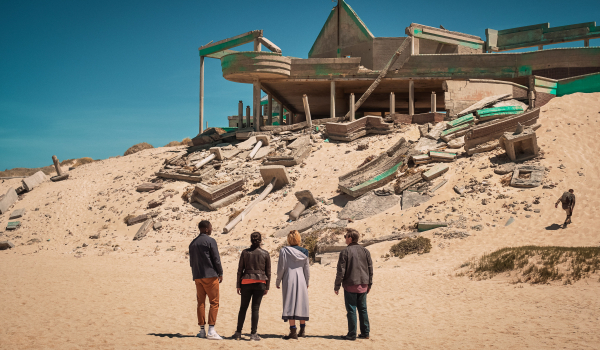 Keeping with New Who tradition, in her second episode, “The Ghost Monument”, the new Doctor takes her companions to see other worlds.

This time, though, it’s on accident. The sort of “forgot to bring a spaceship, floating in space” accident.  No worries – luckily guest stars Angstrom (Susan Lynch) and Epzo (Shaun Dooley) are on hand to give them a lift. They’re taking part in an intergalactic race, the only competitors left competing for the price: 3.2 trillion crim (or maybe krem?). The Doctor’s not immediately up on her exchange rates, but what’s new there?

Actually, for its claims of being a fresh start – new Doctor, new show-runner, no classic monsters – “The Ghost Monument” resonates with past influences in ways both obvious and subtle. Take the debut of the new title sequence, for instance; designed by VFX artist John Smith. A purple void, both dark and luminous, swirling and pulsing unpredictably with cosmic energy, with nary a sign of the TARDIS or the Doctor’s face (which usually feature in some capacity). Accompanied by Segun Akinola’s bassier electro theme, it’s immediately strange and new, ultramodern and urgent. And yet doesn’t the ebb and flow, the mirroring effect, recall Jon Petwee’s first title sequence almost fifty years ago?

The missing TARDIS carries through, of course, to the plot as the Doctor and her new companions/friends/pals search for her missing craft on the sandy, sun-bleached world of Desolation. It’s a world that, to quote race coordinator Illin (Art Malik), has been “made cruel”. Flesh-eating bacteria, robot soldiers, and living rags, The Remnants (voiced by Ian Gelder), seem to have been the end result. There’s a vibrancy and creative freedom to the show lacking in the later Moffat era, which became too caught up in the grand scheme of things, in the schematic and the thematic, to allow for invention for its own sake.

There’s even a new visual style: director Mark Tonderal uses deep space and shallow focus, loose framing, lending the scene a grounded realness. It’s as though we’ve been dropped in the desert with the rest of the TARDIS crew. Chris Chibnall seems to be creating not only a new style but his show but a new mythology out of whole cloth; one only hinted at here with references to the Stenza (the toothy-faced baddie from “The Woman Who Fell To Earth”) and to the forgotten Timeless Child.

Jodie Whittaker’s Doctor is still earnest and energetic, very much the Doctor we know and love. She’s resolutely anti-gun and always the smartest person in the room (“You can’t out-think bullets.” “Been doing it all my life.”), though Chibnall’s script hints at a lack of confidence, of self belief. Time will tell how that plays out.

For now, though, we’ll take Angstrom and Epzo bickering (certain they’ll be back), Graham’s blokey matter-of-factness (“Can people, and things, stop putting stuff inside me without my permission?!”), Ryan’s exuberance (though that Call Of Duty shout out has already dated badly), and Yaz’s focus (hopefully more of Mandip Gill to come). And the new TARDIS console room: half heavy fractal metal; half hexagonal, crystalline Fortress of Solitude. You even have to walk through the actual police box to get there – coat hooks and all. If only there was some sort of biscuit dispenser built into the console, oh wait…

Next week, the historical: “Rosa”.