Home » RWBY: Blake Battles Her Demons in “The Lady in the Shoe” 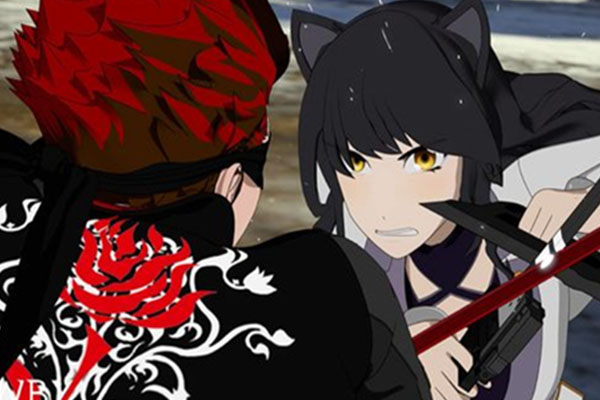 No character is the same as they were at the start of RWBY. Ruby’s naïve sense of right and wrong has titled, and she has matured. Weiss began as a definitive ice queen, now the nicest character in the show. Blake ran from her troubles, and now she runs to face them. Yang has gone from a buxom blonde to a traumatised but more serious and focus-minded fighter. But, perhaps one character who didn’t change much, or at least not for the better, was Adam Taurus. Blake’s crazy ex and deposed leader of the White Fang, Adam hasn’t been the nicest character, or the most well-written. At least, that’s what it looked like from afar.

I’ve found little reasons to like or sympathise with Adam, but his role in the series is important. He was actually the first character to speak in RWBY, during his first appearance in the “Black” trailer. His vindictive, spiteful, and stalker-esque traits made him unnerving, especially towards Blake. And I, like the rest of the fanbase, will not forgive him for what he did to Yang. The conflict between Adam, Blake, and Yang was inevitable, and it did not disappoint. But, most surprisingly of all, I did not expect Adam to make me feel, even for the briefest of moments, feel sorry for him.

Adam was the focus of the premiere character short for Volume 6, and while it didn’t give any hints of his backstory, it did show his descent into pure hateful spite towards just about everyone. He also discarded the mask he’d been wearing since the beginning, and sported a rather strange choice of a black blindfold. That, too, would be removed during the episode, and what lied beneath was a surprise.

The first half of the episode, “The Lady in the Shoe”, focuses on the continued battle against Commander Cordovin’s giant mecha. Ruby, Weiss, Team JNPR, and Qrow engage in a multi-pronged assault to find a mecha’s weak spot. Maria and Oscar keep their distance in the airship so Cordovin doesn’t blow up their one way ticket to Atlas. Cordovin puts up a good defence, her mecha armed with shields and an energy cannon. Qrow and Ren realise that the shield generator is on the back, but the mecha’s weakness is within the cannon itself. When the gang are put in danger, Maria launches a missile at Cordovin, but she grabs it and throws it right back, the segment ending on a dramatic cut to black. Ooh, I love it! The action and banter are fantastic! Granted, the characters are likely to be fine, but the end to the segment is wicked.

Blake, meanwhile, is running from but fighting back against Adam. The persistent creeper continues his assault on Blake, destroying the coat she’s been wearing for three volumes. Frankly, it was a little impractical for combat. Adam makes the very controlling comment of, “I wouldn’t have to do this if you just behaved!” Though Adam accuses Blake of cowardice, though it is obvious he wishes to control her. He disarms Blake, and then removes his makeshift mask. He claims many people hurt him, but no one quite like Blake did, and assumes she is now on her own.

And we finally see what he was hiding under his mask. Adam is heavily scarred across his face, and marked and half-blinded with a Schnee Dust Company brand. Out of all of the ways I imagined he would look like, it wasn’t exactly like that. It also hints at Adam’s backstory, implying he may have been used as a slave in the Schnee dust mines, or something worse. It would explain both his contempt for humans and targeting Schnee’s resources. Blake uses her Semblance to evade Adam’s attack, and like a phoenix on a motorbike, Yang soars to the rescue. Her precious bike is the unfortunate sacrifice, running Adam over before taking a swan dive down a waterfall.

Yang has been dealing with her trauma as the past volumes have gone by, and now she is to face her demon. Yang and Adam get into their long awaited fight, but it is more of a taste of what is to come in the next episode. It also occurred to me that Yang has been using her legs in combat a lot more, her fists forever tarnished during her staged fight with Mercury in Volume 3, and then losing her arm to Adam. Yang’s hand starts shaking again, and while Adam goes to mock her, Blake steps in, grabs Yang’s hand in support, and declares that the dynamic duo are protecting each other.

Now, this could be the part where I officially celebrate at the apparent confirmation of “Bumblebee”, Blake and Yang’s pairing title. Instead, it is a victory for both girls overcoming their trauma and standing up to Adam. Both have been abused by this terrible man, and now they turning the tables on him. But, some corners of the FNDM have accused the showrunners for ship-baiting and “ruining” the legacy of Monty Oum. During an interview on Rooster Teeth after the pilot of RWBY, Monty was asked if LGTB characters will appear, which he confirmed, since the teenage characters are exploring their sexualities during the show.

How exactly are Miles Luna and Kerry Shawcross ruining Monty’s legacy, when they took responsibility to continue RWBY in his absence? Sure, the writing has been up and down, but that isn’t an excuse for angry naysayers to insult the crew of the show, who dedicated themselves to continuing RWBY in his memory. Shame on those spiteful individuals who insult the creators just because they disagree with a fictional romantic pairing. If you don’t like a pairing, fine, but don’t drag down the whole community with poisonous and rude comments. The RWBY fandom is a wonderful community, and amongst the best I’ve seen.

+ The reveal of Adam’s face was a lot more surprising than I imagined.

+ Seeing Blake and Yang overcoming their trauma together is wonderful.

What did you think of this episode of RWBY? Are you a supporter of Blake x Yang? Do you want to see Adam get run over by Yang’s bike again and again? Leave a comment below, or on our Twitter or Facebook feeds. RWBY can be watched on Rooster Teeth’s website.