Home » Hyper Epics: A True and Unique Vision of a Web-Comic 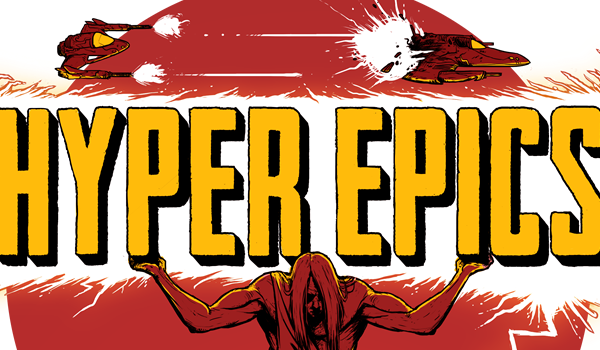 Most of today’s comic book websites suffer from one thing: a lack of content and an overabundance of spam. As comic book lovers, we love simple sites that are easily negotiable. Hyper Epics understands this tremendously.

The factor that made the site stand out for me was the soundtracks! The home page offers a welcoming tune, allowing the reader to browse with enthusiasm. If all the site had was one original song on the home page, it would have been more than enough to win me over. But that’s only the beginning. Every comic listed under the New Issues section comes with its very own atmospheric track. This reinvents the way a comic book fan can read an issue online. Not only is the layout for each issue displayed wonderfully on the site’s page, each track that goes with each issue engages the reader that much more. I almost felt as if I was listening to a radio play!

The issues presented on the site are among some of the best indie issues around. One in particular that stood out to me was Out Of Their Depth by Tom Hoover, Thomas Tuna, Richard Elrassi and Jaymes Reed. The story follows that of a submarine that plunges deeper down in the endless abyss of the ocean. But when the exact same submarine appears next to them, occupied by the same crew, confusion begins to dwell upon the captain of each vessel. Even though the issue is a single page long, I found myself incredibly disappointed knowing that I could not read any more once I had reached the end. It was that engrossing!

Hyper Epics web design is also worth noting. A great amount of time has been taken here with the liberty of what was decided in terms of drawing in each viewer with the dazzling imagery displayed on the site’s home screen. Yet at the same time, it is not over-cluttered or too flashy. There is an essence of simplicity to the design which does not make it too distracting. What stands out for me personally is the moving graphic that is  displayed behind the site’s logo of a rotating galaxy. Great touch for a banner!

In conclusion, I would say that this website is pioneering in terms of layout and detail. The content posted is just what we want as comic book readers, it isn’t spammed with ads, and is consistently being updated with new comics and interviews on a daily basis. I would suggest Hyper Epics to anyone who is interested in not only a great read, but for those who are beginning a career in graphic design. There is much more than meets the eye when it comes to what this site offers in comparison to other comic book websites all across the net. Hyper Epics also offers their own mailing list, as well as showing involvement in the Patreon Community. They truly care about their readers and fans, and that isn’t something to be taken for granted.

You can take a look at Hyper Epics awesome website here!

Have you had a chance to peruse this amazing website while listening to some awesome, atmosphere tunes? Let us know in the comments below or send us your thoughts on Facebook or Twitter!