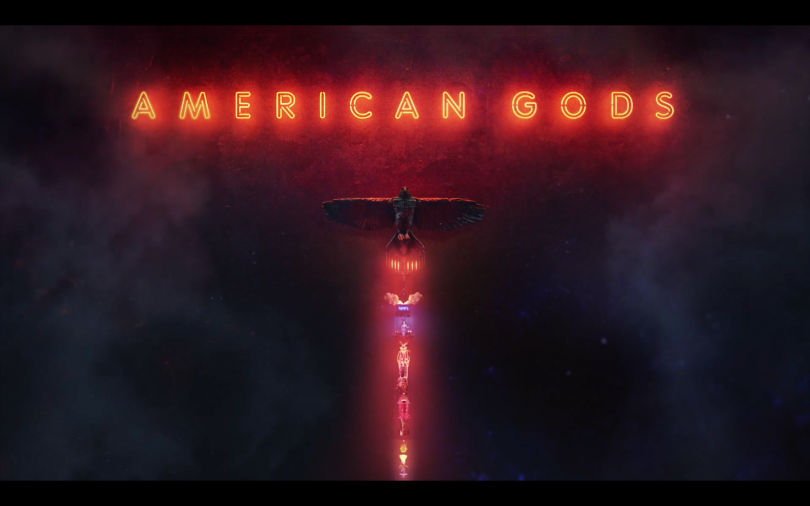 The opening credits of American Gods have to be amongst some of the most coolest TV titles in recent memory. The TV adaptation of Neil Gaiman‘s classic novel has begun to air its second season, bringing back the amazing titles with it. American Gods is about a war in the USA between ancient, forgotten gods, and the new gods who represent modern technology and culture. The New Gods want to wipe out the Old Gods, so they can become the sole proprietors of America’s prayers and worship. There is a lot of esoteric symbolism to explore in the titles, as evidenced by comments made by its designer Patrick Clair. Let’s explore each shot in the credits, and see what we can determine from them.

The opening credits mix religious and mythological iconography with modern technology, creating  fascinating imagery. The 90-second titles are beautiful to watch, and requires multiple replays. The analysis here is just one fan’s speculation. 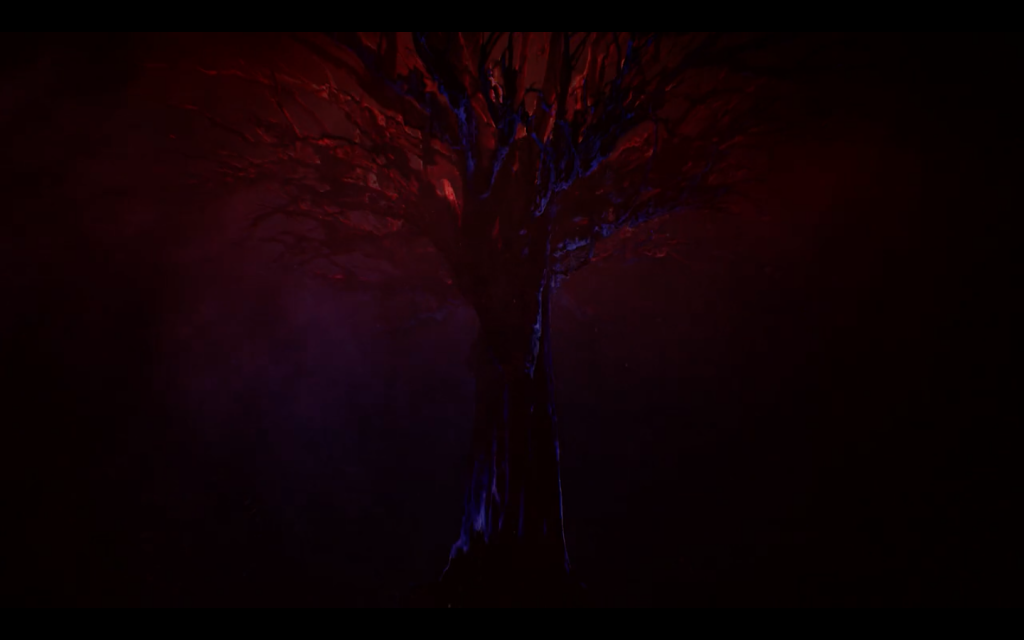 The first image in the credits is of an ancient tree, surrounded by the foreboding sounds of an approaching storm. This is Yggdrasil, the Tree of Life in Norse mythology that makes up the Nine Realms. This makes a rather subtle hint to Mr. Wednesday’s true identity. There are many other trees of life in other religions and cultures, including the tree of knowledge in Eden. The tree being at the start of the credits may reference animism, an ancient belief that inanimate objects have souls. Mr. Wood, a tree-like animism god, converted himself to become an industrialisation deity to avoid being forgotten. 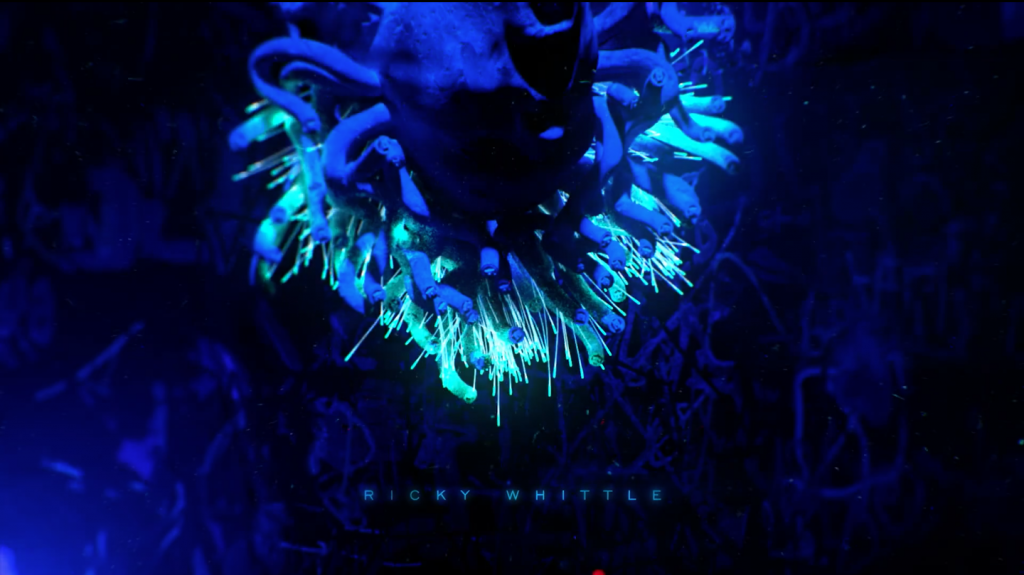 The next image we see is the petrified head of the gorgon Medusa. Medusa is a snake-haired monster decapitated by Greek hero Perseus, capable of petrifying those who looked at her. Instead of snakes for hair, this Medusa has fibre-optic cables coming out of her head. These cables send information and transfer data through pulses of light. The fact Medusa’s head is upside down, petrified, and covered in cables, hints to our fixation with modern technology and social media; people staring at their phones and tablets for hours on end without communicating with others verbally. 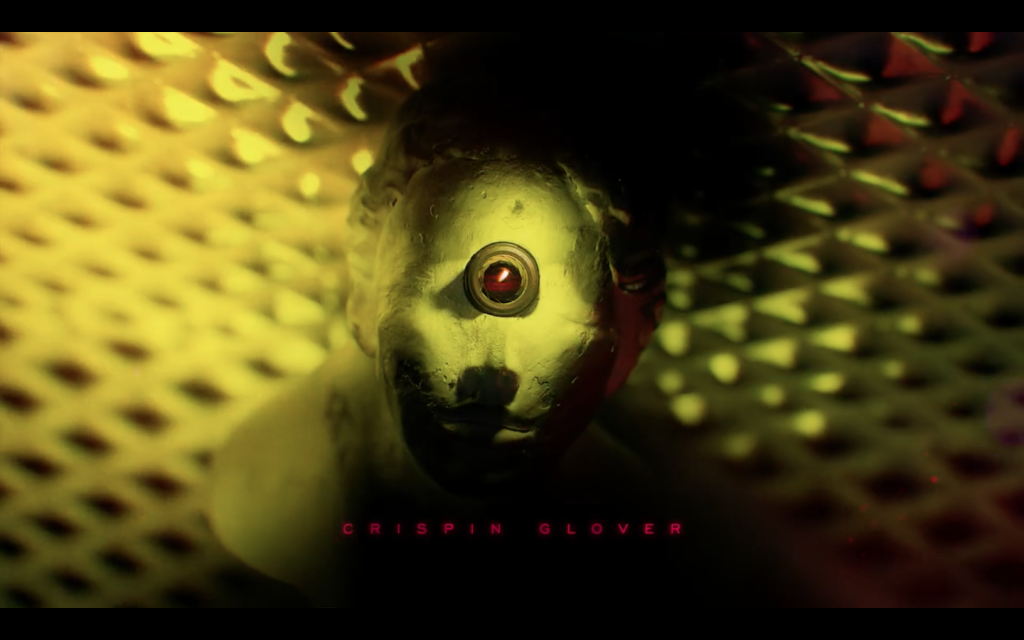 Patrick Clair describes the next image as the “Selfie Nymphs”, a trio of cycloptic woman who have camera lenses for eyes. The nymphs are minor goddesses in Greek myths associated with nature. They were beloved by many admirers, and often associated with specific environments. The fact that the Selfie Nymphs have mobile phone cameras in their heads alludes to the selfie-obsessed society we have today, and the often vain culture that comes with online popularity. They could reference the Nords, a trio of sisters from Norse myths, who can see the future. These siblings play a key role in the novel. 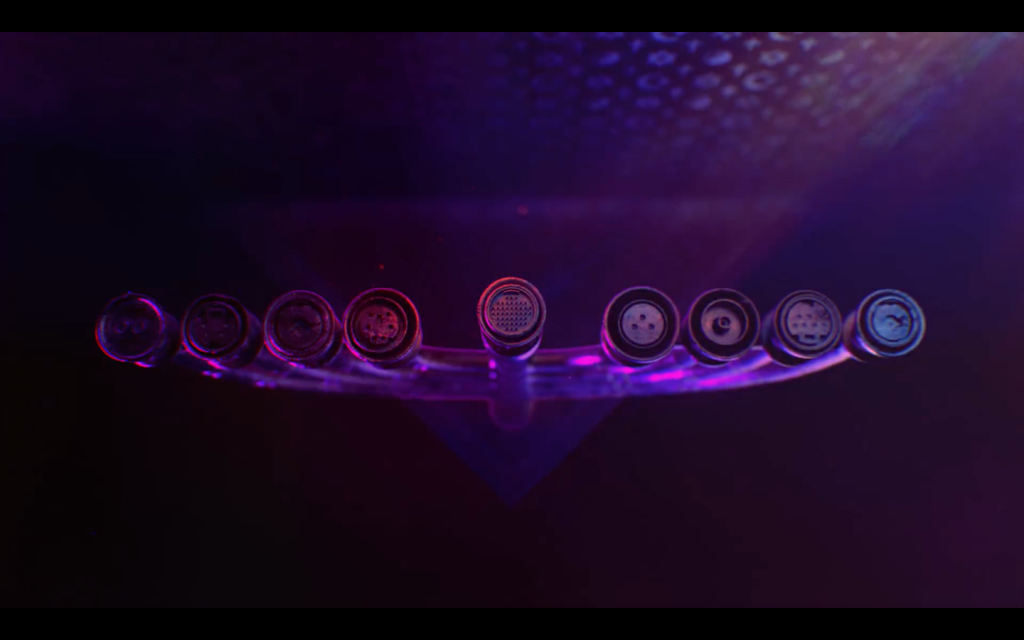 Next, we have a traditional menorah used to celebrate Hanukkah. On the wallpaper behind the menorah are symbols of other religions of Christianity, Judaism, Taoism, and Islam. The menorah lacks the nine candles, but instead has electrical sockets and DIN connectors. Each connector is different, perhaps symbolising the differences, yet the similarities of our many religions. They all have the same purpose. 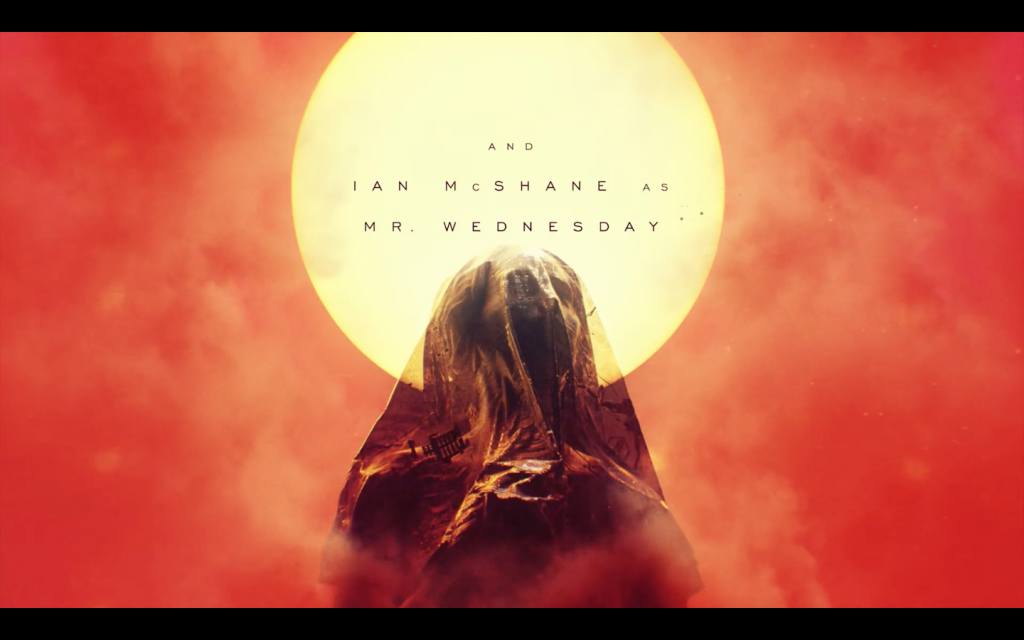 The following image depicts the Lady Madonna, wearing a veil over her face, whilst illuminated by what resembles a halo. On closer inspection, we see the veil is actually wearable technology, made from silicon threads. St. Mary, being covered by a veil of technology, may reference how people are drifting away from committed worship, favouring the internet and computers. Interestingly, the halo behind Mary turns briefly into what resembles the Sun, another source of worship in ancient times. The veil also references how the New Gods are trying to stomp out the traditions of the old gods. 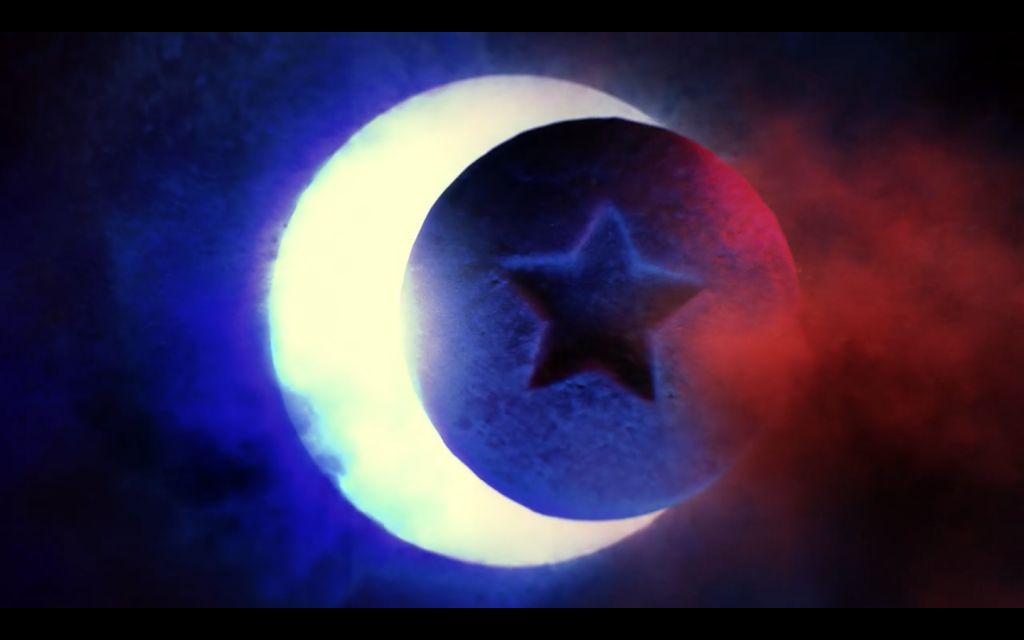 The next shot is actually very quick, and doesn’t get much focus. The halo/sun used by the Virgin Mary transforms into the crescent moon of Islam. A star-branded ecstasy pill floats over the light, completing the symbol. This image and transition from Madonna to the Islamic symbol may be another subtle hint that certain religions have similar origins, stories, and figures. 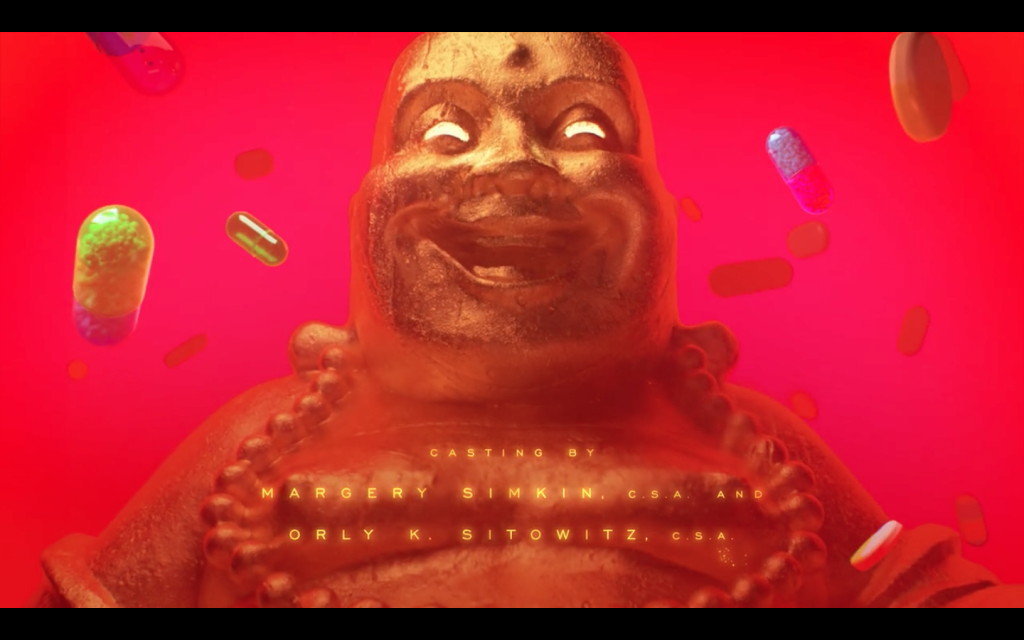 The Laughing Buddha turns up next, surrounded by drugs, modern medicine, and pills. This could be interpreted as a clash between eastern and western medicine. In Buddhism, the mind creates sickness and illnesses, whilst America relies on medicinal and recreational drugs to feel better. This scene hints that the Laughing Buddha is experimenting with different drugs, in direct contrast to Buddhism’s own teachings. Wednesday describes America as a land without gods, so those who are brought over by immigrants, lose their ways. 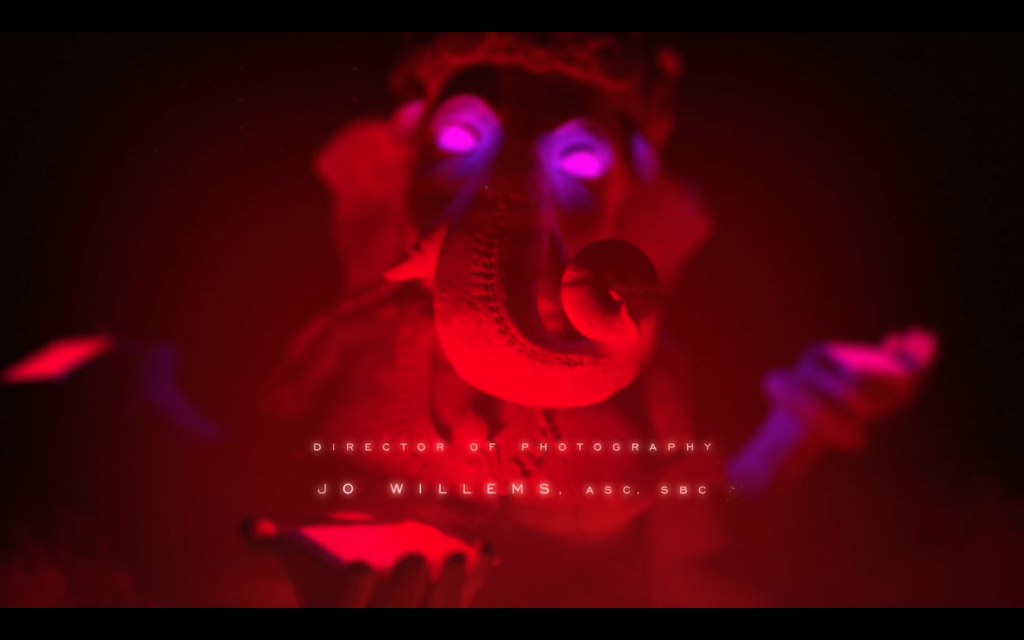 Perched on top of a lotus flower and a tower of syringes, glass tubes, and a jet turbine in the Hindu god Ganesh. Ganesh is the god of wisdom, new beginnings, success, and is known as the Remover of Obstacles. Obstacles to travel were literally overcome via airplanes, and reproduction issues were achieved through fertilization, represented by the syringes and tubes. Ganesh is the patron of sciences, so perhaps in the American Gods universe, he granted mankind these achievements, then retired to surf the net on multiple phones. Either that, or he got distracted and was overcome by distraction to offer his divine wisdom.

The Aibo and the Pyramid 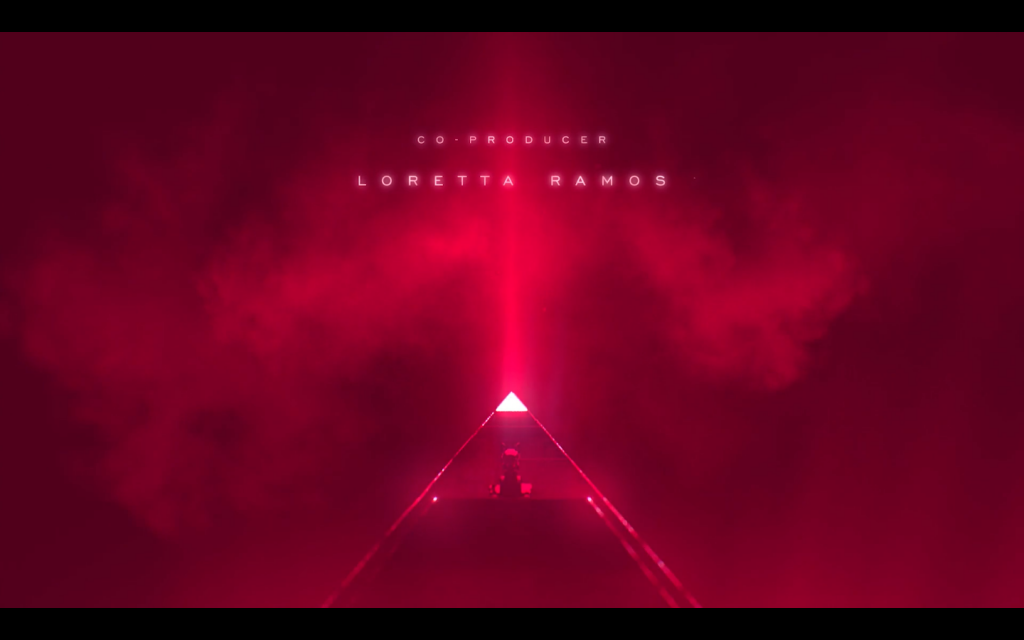 Now, this one is interesting. At first, it looks like an Egyptian pyramid with the Sphinx in front. In fact, it is the Luxor Hotel in Las Vegas, and the robotic Sony Aibo dog. The Sony Aibo were popular robotic pets in the 1990s. When the toyline was discontinued, some people mourned the Aibo, even staging funerals for their companions. The Aibo could be considered a form of artificial intelligence, forcing some to question the need for gods, when we could play the role ourselves. The “worship” of the Aibo, twinned with the pyramid, could be a nod to how cats were worshipped in Egypt (i.e. Bast). 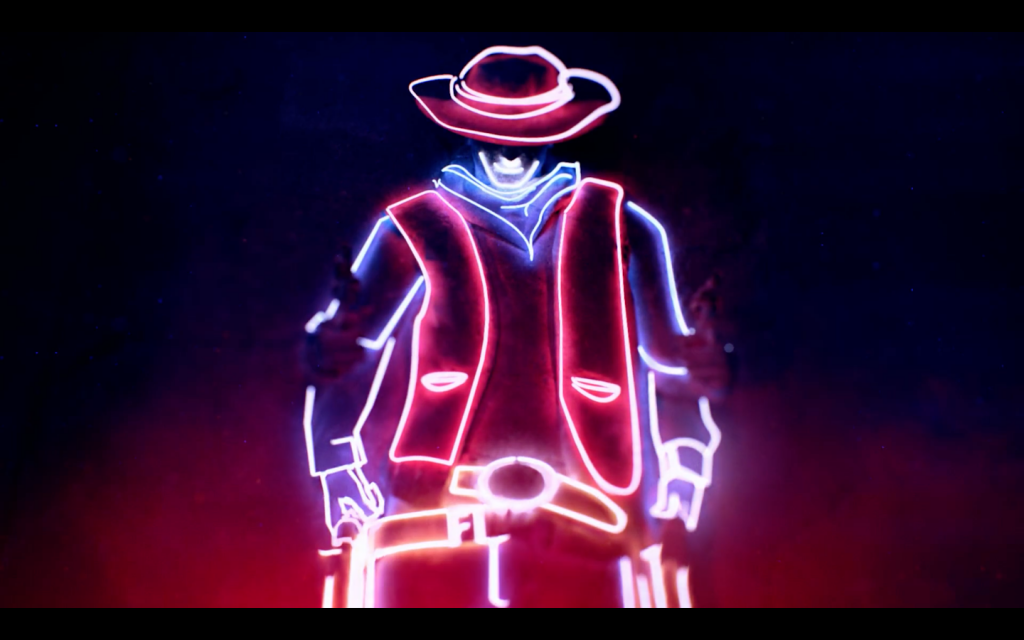 Another scene packed with a lot of imagery. A large neon image of a cowboy stands before us, resembling Vegas Vic, but has a prosthetic leg. The cowboy is an iconic, heroic figure in American culture, symbolising adventure and violence. But, the mechanical limb alludes to the unpleasant reality about such things. It also reflects how soldiers suffer in wars in the name of freedom. Cowboys are no longer idolised, replaced by the American soldier. The cowboy’s “horse” is a mechanical centaur figure, sporting a sex doll’s head, a satellite dish for a neck brace, and the legs of the army drone “Big Dog”, designed to replace soldiers. This weird hybrid could represent the many purposes of satellite communication. 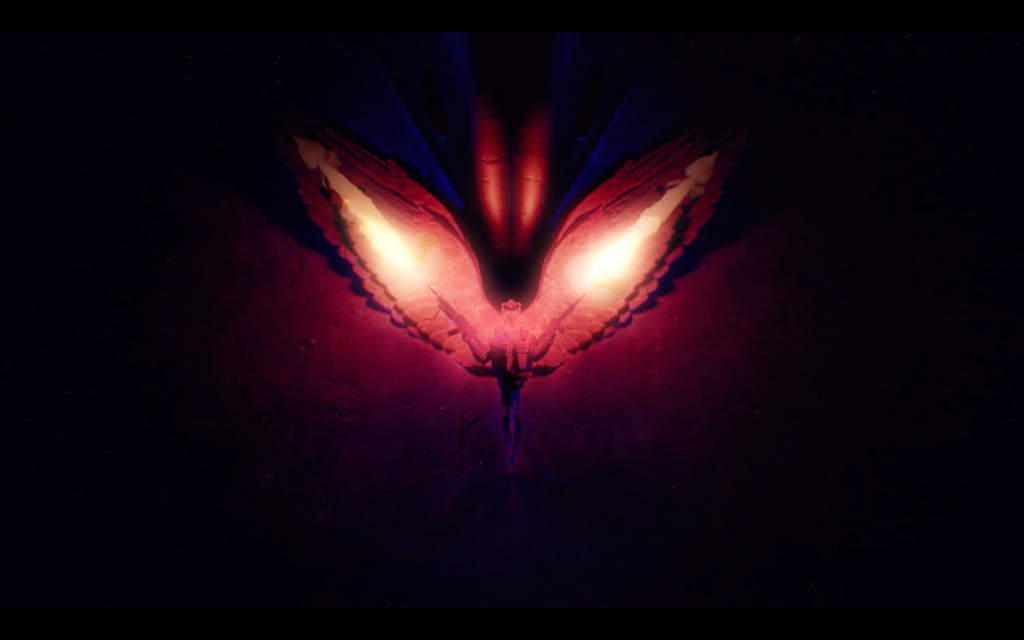 The Angel of Death appears next, wearing night vision goggles, combat gear, and wields machine guns. The angel fires them enthusiastically skyward, making it look like his wings are on fire. This look alludes to angels symbolising both peace and death, peace often achieved through war. The Angel of Death is said to have flaming wings and many eyes, referenced by the goggles. This character’s position brings forth ideas of the ultra-hardcore way some Americans like to see themselves as, guns blazing and being Team America-style badasses in the world (‘MURICA!). 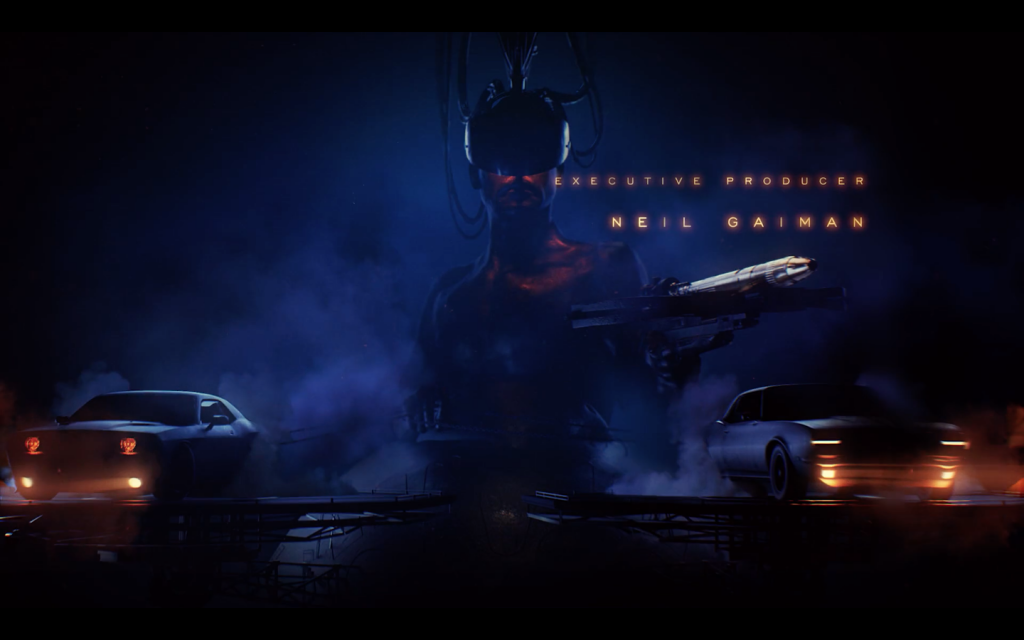 The following scene shows Ares, the Greek god of war, wearing a VR helmet. His chariot is pulled by two American Mustangs, and he wields a crossbow armed with a nuclear missile. This can symbolise how technology has been used to become better, or worse, at war. The Mustangs replace the need for horses, being a lot more reliable and faster (horesepower!). The nuclear missile’s presence, again, symbolises America’s state as a superpower and the destruction it could cause. Yet, another theory could be this is meant to resemble how we are becoming increasingly desensitised to violence and warfare through fictional conflict.

Alternatively, another theory suggests this is Lady Justice, though she has the crossbow and cars in place of her scales and sword. Justice is no longer blind, now it is virtual. In this case, notice how the physical tool for interpreted justice (the crossbow), is raised higher than the balanced and fairer tool (the scales). The cars are constantly revving, and the missile is primed and ready to fire. This may symbolise America’s  eagerness to dispense justice. 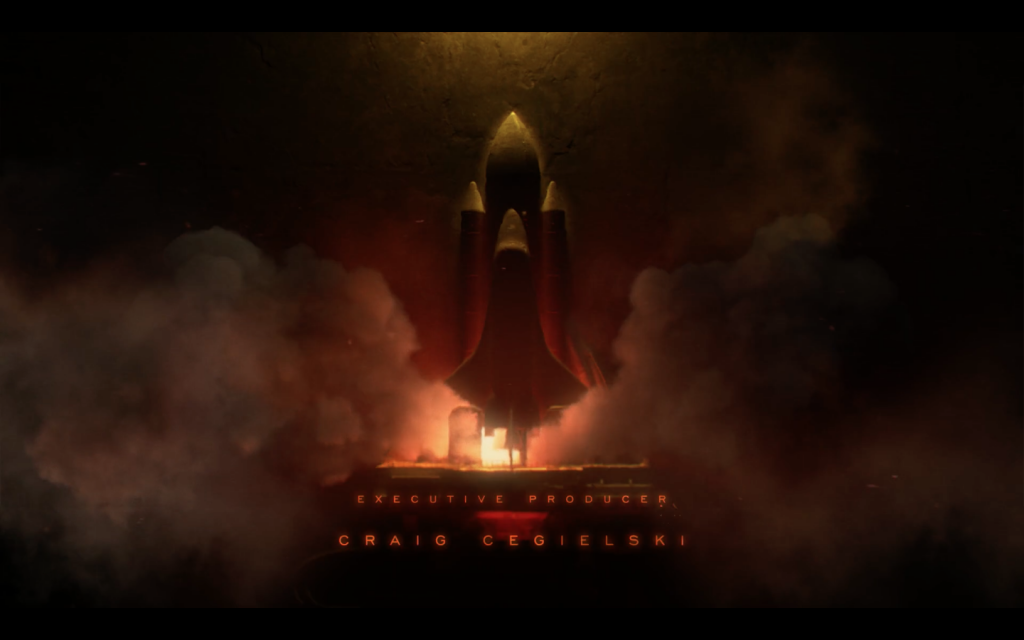 We next see what resembles a space launch about to occur. Holding up the launch tower is a stone mound, appearing to feature Egyptian hieroglyphs. This references the belief that spaceships, aircrafts, and speedboats are depicted in ancient hieroglyphs. The rest of the tower is made up of computer parts. The shuttle then takes off, blasting smoke and fire in its wake, symbolising how science took mankind to up the domain of the gods. 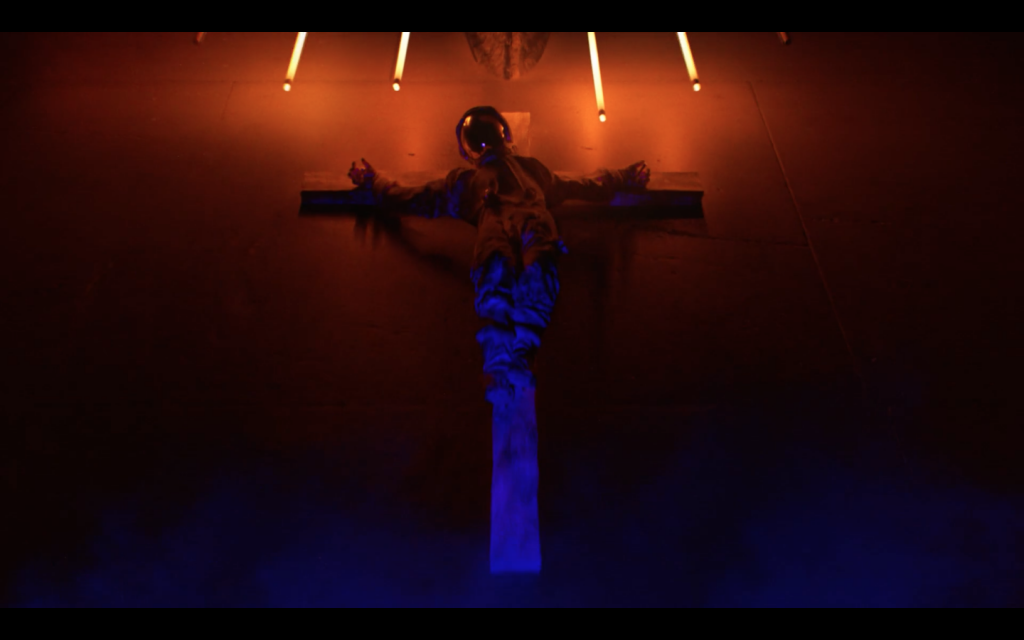 We now come to the money shot of the whole sequence, and the very first image made for the titles. A crucified astronaut is shown in place of Jesus on the Cross. This could reference a number of things – the suggestion that gods are aliens and came to Earth; the brief deification of American astronauts; or the clash between science and religion. It could represent the death of the space age, with the astronauts being “crucified” by the government once public interest and money ran out to continue space missions. In 2015, a Russian graffiti artist made a similar piece of artwork depicting Yuri Gagarin being crucified. 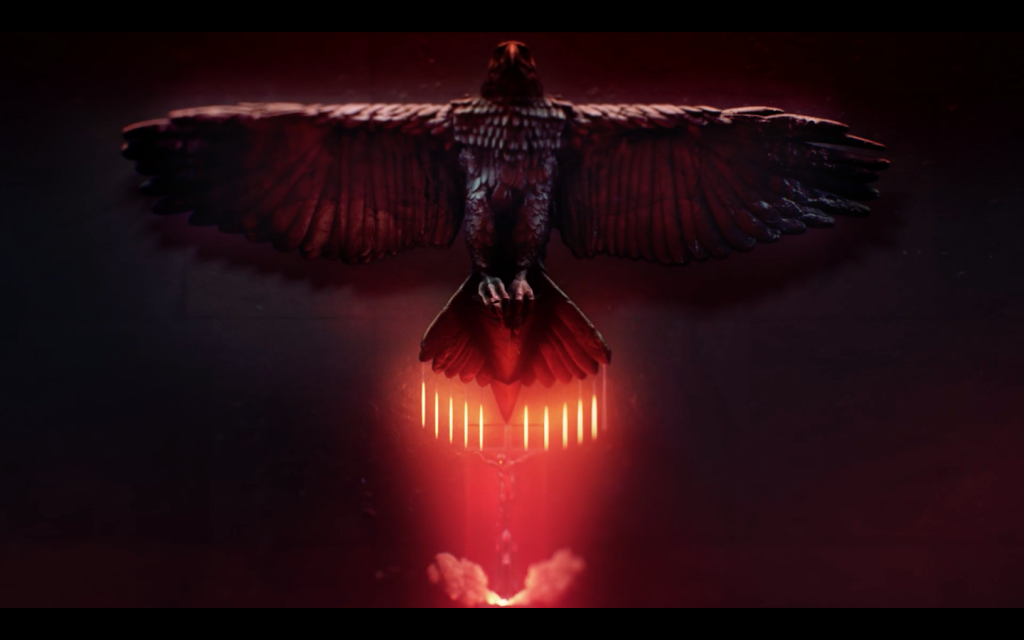 And finally, we reach the top of the totem pole. At the top is a wooden carving of an eagle, symbolising Native American culture, and the symbol of American patriotism and freedom. The eagle is also of huge importance to Zeus, the Holy Roman Empire, and Nazi Germany. Ultimately all of these mixed religions and cultures came to America through immigration, overwhelming the culture of the indigenous peoples of North America.

What are your interpretations of American Gods‘ opening titles? Are you looking forward to the show’s second season? Leave a comment below, or on our Twitter and Facebook feeds.