Home » Fantasy as a Gateway to Tolerance: In Conversation with Hari Conner, Creator of Finding Home 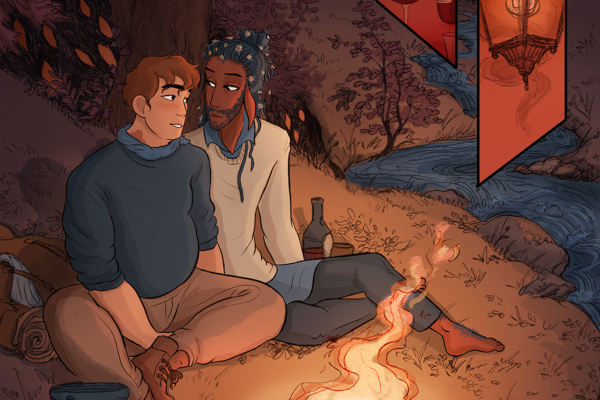 Hari Conner‘s award-winning comic Finding Home has returned to Kickstarter to raise funds for its second volume, The Healer. At the time of this interview being published, Hari surely has little need to worry whether or not the comic will become a reality, as Finding Home Volume 2: The Healer has already raised over 100% of the funds required.

That level of success is surely a reflection of the comic’s quality. Finding Home pursues an empathetic depiction of mental health and LGBT+ themes, set against a fantasy backdrop that’s brought to life with gorgeous art. The comic can already be read online, with the Kickstarter campaigns focused on turning Finding Home into a print title. We caught up with Hari to discover more about the second instalment in their widely popular comic.

A Place To Hang Your Cape: Volume 1 of Finding Home was a big hit on Kickstarter last year. What can readers expect from Volume 2: The Healer?

Hari Conner: The Healer definitely gets deeper into the plot and drama of the comic, with more of the magic and dangers of the world coming to the fore. As the characters get closer there’s more vulnerable, romantic moments, as well as difficult and confrontational moments between them. A lot of the scenes in The Healer are the ones I first wrote when originally scripting the comic a few years ago, and aren’t out in the webcomic version for a while, so I’m really excited for people to read them!

AP2HYC: Why did you want to make the transition from a web comic to a print edition for Finding Home?

Conner: There’s so many amazing and unique things that can be done in the medium of webcomics, and there are a lot of advantages in posting the story as a webcomic, but personally I’ve always been really drawn to physical books. I like graphic novels you can sit and read all at once, and the way your eye can be drawn across a double spread with layout, pacing, and colour, so making a print version of Finding Home has always been the dream. 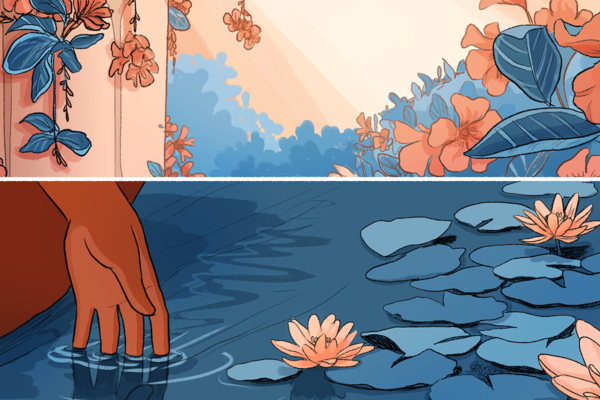 AP2HYC: What has the process been like in shifting the medium, is it changing the flavour of the comic at all?

Conner: I’ve been drawing the comic with a print layout, both from a technical standpoint with bleeds and file formatting, as well as thinking about stuff like colours and layouts over double spreads. So, yes, I actually think there’d be some pages where compositions or colour palettes will come together, or page turns will add to the pacing, and add another layer to the print version.

AP2HYC: As a writer, how do you go about balancing the darker themes of The Healer with the comic’s lush, inviting visuals?

Conner: I think the natural settings of the comic have the potential to be foreboding as well as appealing. I love trying to capture the feeling of a quiet forest at night, or wide open plains on a bright day, or a storm coming on, and how that affects or mirrors the characters’ emotions. I’m really interested in contrasting the two, as well – dreamy sequences full of bright colours that provide an uncomfortable comparison with the darker tone of a scene.

I also think making drawings more detailed or intense can provide a sense of a place feeling overwhelming, as well as immersive, depending on the framing – or zooming in on details can give a sense a character is zoning out, unable to deal with the people around them. 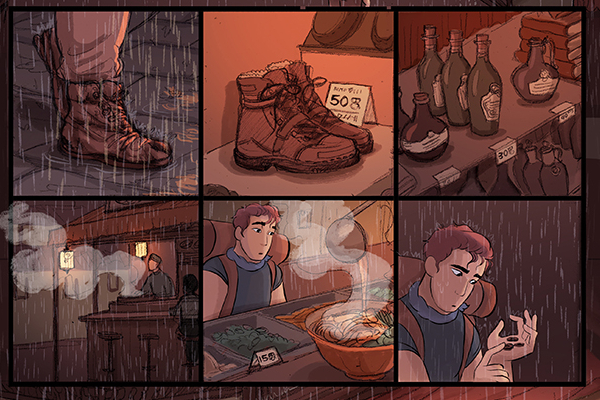 AP2HYC: Finding Home has a very melancholic vibe to it, visually. Plenty of rustic colour pallets. How do you create the visual tone of the comic?

Conner: On a practical level, I come up with colour palettes at the thumbnail stage that match the tone I want for the scene. So, I make notes about how the colours/weather/setting should feel, what time of day it is etc. while I’m still at the stage of sketching it out.

AP2HYC: Why did you want to create a comic that fused LGBT+ and mental health themes against a fantasy backdrop?

Conner: I’ve always been interested in how fantasy settings can be used to explore serious themes in a more abstract way. I think especially for writing about LGBT+ characters, fantasy can provide a space to imagine queer people and relationships without it necessarily having to go hand in hand with society’s intolerance or mistreatment of them – particularly as a queer author who’s experienced that. It’s an interesting space to explore ideas about societies with different expectations/assumptions about gender and relationships, and gives the author the opportunity to choose how much they want to focus on discrimination, or the characters’ identities.

Also – online readers can be from all over the world, and a lot of my books get sent internationally. If I set something in the UK, I end up making references to a lot of things that I don’t even realise are specific to my experience… so I almost think that because sometimes a fantasy setting can be more abstract, it can be easier for different kinds of people to connect to. It’s setting the story up as a fable, where the reader expects to be told a story about an alternate world, so is possibly more open to different ideas – e.g. about LGBT+ relationships and mental health. 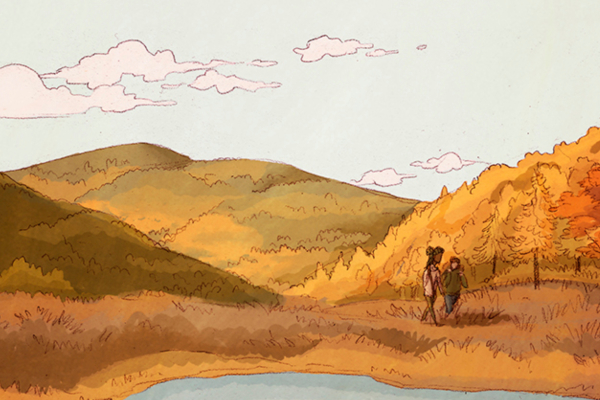 AP2HYC: What does the future hold for Finding Home, and yourself as a comic creator?

Conner: There are three volumes of Finding Home scripted in total, so if everything goes well with the Kickstarter I’ll have The Healer out this year, and hopefully the final one out in 2020!

As for me… I think like a lot of comics artists I always have other ideas on the back-burner. Alongside making Finding Home in the last few years, I’ve also been working on short comics for anthologies and recently wrote a choose-your-own-path book that was pretty popular. So there’s definitely other projects I might want to expand on, and a few preliminary pitches I’ve started getting together for new books and comics I’d like to do.

At the moment Finding Home as a webcomic (and hopefully Kickstarted volumes!) is definitely my biggest focus, and my biggest project – both because the themes are more complex and ambitious, and because all together it’s looking like 500+ pages total! My focus is very set on bringing the story to its finale, I’m really so excited for people to read it – and I think I’ll see where I go from there.

Are you already a fan of Finding Home? Will you be backing the comic on Kickstarter? Let us know in the comments section below or send us a Tweet! Don’t forget to discover more about our thoughts on Volume 1, too.