Home » Origins of the Pokémon – Volume One 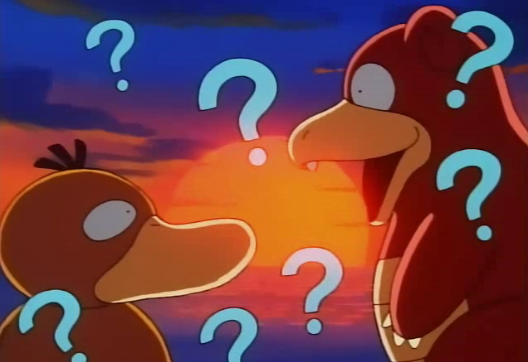 Detective Pikachu has brought the world and creatures of Pokémon to life like never before, in amazing live action special effects. A new generation of Pokémon will be introduced in the upcoming Pokémon Sword & Shield. At the time of this article’s writing, there are officially 812 Pokémon, with likely more to come as we get closer to the new games’ release. No wonder they scrapped the “gotta catch ‘em all” slogan, such a feat is now impossible.

But, where does character designer Ken Sugimori and his team come up with such imaginative creatures? We’re going to explore such origins of individual Pokémon in this fun collection of articles. The weird and the wonderful, the frightening and freaky, they’re all going to be covered here. First up, the original generation of Pokémon of Red & Blue & Yellow.

A lot of information about the Pokémon comes from the fantastic Bulbapedia, and their “On the Origin of Species” series. 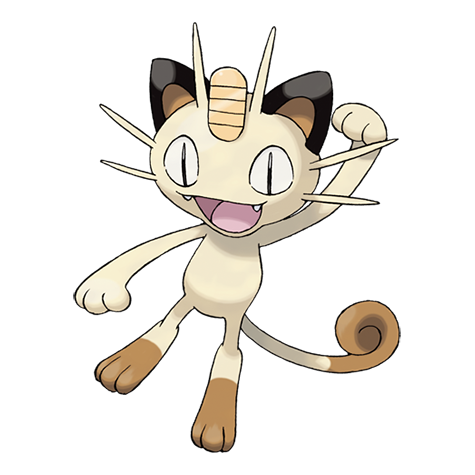 Let’s start with Meowth, the second most popular Pokémon after Pikachu. Meowth is based on the Lucky Cat, or “maneki neko”, a highly recognised Japanese icon, said to bring good luck to the owner. The ceramic cat is common in Japan, its raised paw beckoning visitors to their master’s business or home. If you’ve been to an Asian restaurant, you have likely seen one of these. There are many folktales associated with the cat, often involving a cat bringing good fortune or luck to downtrodden businessmen for their own generosity.

Meowth’s lucky charm is a Japanese koban coin of the Edo period, said to bring good fortune. Meowth’s signature move is Pay Day, which can cause money to be dropped in-game. Team Rocket’s Meowth doesn’t know how to use the attack, likely due to his alliance with evil. This came into effect in an anime episode, where Meowth found himself amongst a cult, who worship a huge golden Meowth idol that’ll make them all rich with Pay Day. Those poor deluded imbeciles. Still, Meowth has found his own fortune, learning to walk and talk like a human, joined Team Rocket, his own muddled family. He often wishes good fortune on characters with similar backgrounds, such as Ash’s Litten, or a Pidgey that wished to fly to the Moon.

Abra, Kadabra, and Alakazam are the quintessential psychic-type Pokémon, taking inspiration from real world psychic and magical skills. Abra can teleport, a common illusion in stage magic, and is a real pain in the ass to catch. Kadabra and Alakazam can both bend spoons with their minds. Kadabra sports a red star on his forehead, and three squiggles on his body, originating from Zener cards, used to conduct tests for psychic powers and clairvoyance in a subject. The cards were invented by psychologist Karl Zener, though his experiments are often discredited.

The trio’s Japanese names are nods to famous psychics and magicians. Abra (“Casey”) is a nod to Edgar Cayce, known for inducing self-trances; Kadabra (“Yungerer”) is named after famous spoon-bender Uri Geller; and Alakazam (“Houdin”) is named after legendary escape artist Harry Houdini. Uri Geller, accusing Kadabra and Alakazam of being parodies, sued Nintendo for the alleged insult. He also accused Kadabra of representing Satanic or occultist practices via the star on his head. As of 2019, the lawsuit has not been resolved, and Nintendo hasn’t published any Kadabra-related trading cards in years. It can’t be denied that there are many similarities between Geller and Kadabra. But, if I was in his position, I’d be flattered to have a Pokémon based on me. 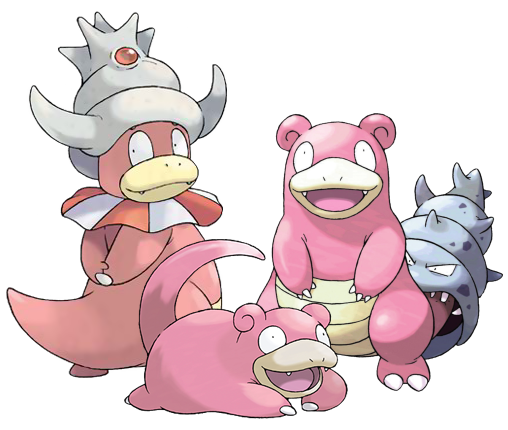 Ah, dear Slowpoke. A Pokémon so mindnumbingly slow that it can take it twenty seconds to register pain. Slowpoke has one of the most unusual of evolution triggers, using its tail to fish for Shellder, which will then clamp on, turning it into Slowbro. Shellder’s appearance changes when Slowpoke evolves, resembling a horned turban mollusc, and is a delicacy in Japan. Whilst Slowpoke, Slowbro, and Slowking resemble pink hippos or otters, they may take inspiration from the “Sazae-oni”, a Japanese yokai demon.

The Sazae-oni is inspired by the horned turban, referenced via Slowking’s shell crown. It is said that this demon is born when the turbo mollusc in question reaches the age of thirty. The most famous story related to the Sazae-oni is that of a woman drowned at sea by pirates, only to return as a demon and castrate all of them. You know, all those Slowpoke do get their tails cut off in Pokémon Gold and Silver… 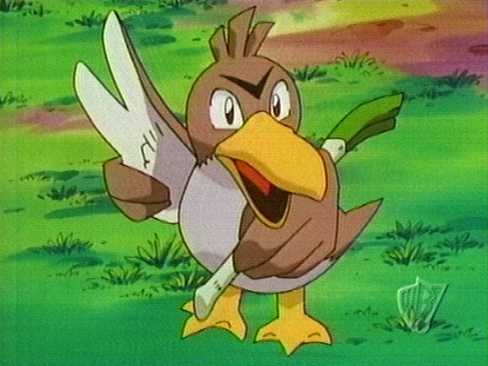 Farfetch’d is a Pokémon that speaks for itself. It is a particularly strange Pokémon, a wild duck running around using a green onion like a sword. Most sources says Farfetch’d is based on a wild duck that offers food to lost or wandering travellers in forests. But, its true origin is the Japanese saying, “Kamo ga negi wo shotte kuru,” which translates as “a duck comes bearing green onions.” Farfetch’d is described as being a very rare Pokémon, due to being nearly driven to extinction for being a delicacy in meals. This is a nod to duck soup, which green onions are commonly used in.

In Pokémon Red & Blue, a Farfetch’d can be traded for a common Sparrow. You’d think this would be a good trade, but Farfetch’d doesn’t evolve, and has poor stats. This makes the whole trade…a little farfetched. Nature’s loser partnered with a loser trainer. However, in truth, I suspect Farfetch’d gained his English name for just how bizarre the Pokémon is to western audiences. A reference that wouldn’t quite work with American audiences, so they gave it a fitting name. 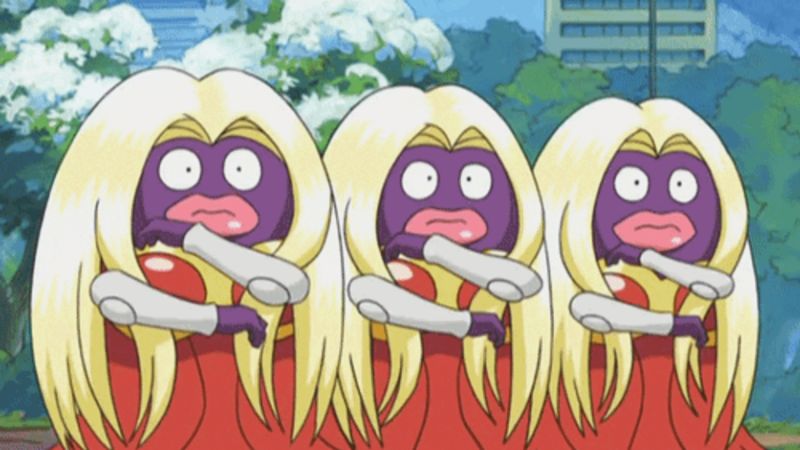 If Porygon giving kids epileptic seizures was the most controversial thing related to Pokémon, then Jynx must be the second. This bizarre Pokémon caused a huge upset in America, accused on promoting blackface and being a racial stereotype. Jynx’s original design featured a literal black face, changed to purple in subsequent edits. Jynx’s debut episode in the anime was cut due to the backlash. A lot of people still cry fowl that Jynx is a racist caricature, but there many other, less harmful origins for this mad kissing Pokémon.

Jynx has been interpreted as being based on Hel, a Nordic goddess, who lived in the icy Niflheim, and had a half-and-half, black-and-white face. She could also be based on the “fat lady” of operatic origin related to the valkyrie Brunhilde, or Yama-uba, the Japanese mountain crone. The most interesting inspiration could be the Japanese fashion trend, “ganguro”, where women tan their skin and bleach their hair white. This trend is known to be associated with Yama-uba. So, make what you will of Jynx. She is one of the weirdest Pokémon, but stands out from the crowd. 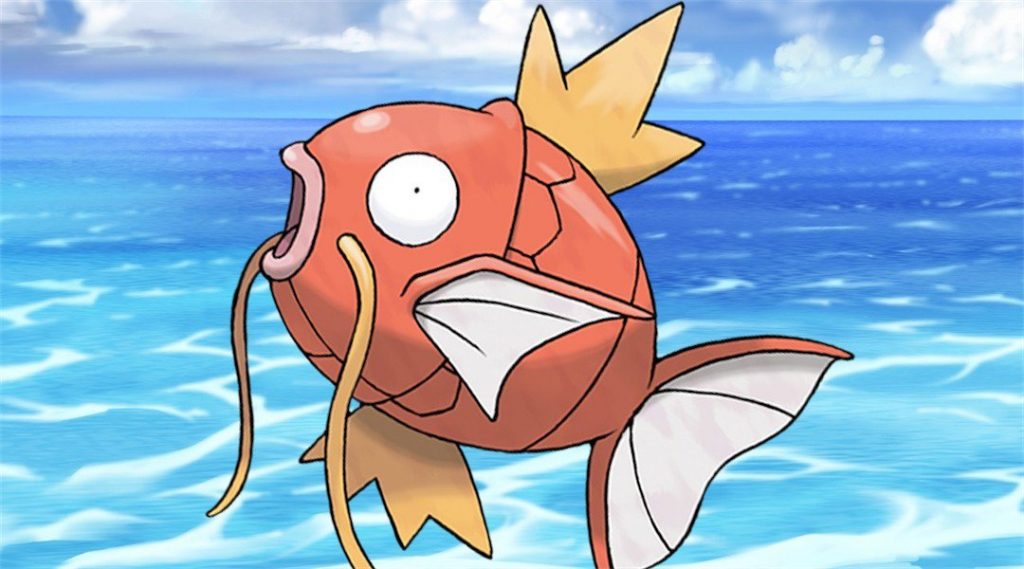 What makes Magikarp such a great Pokémon is just how pathetic it is. Once considered a strong fighter, evolution reduced it to a weakling that can only learn two attacks. But, give it enough attention and training, and it’ll evolve into the almighty Gyarados. Pokémon has never really cared much for realism, so how does a carp evolve into a sea serpent? Magikarp is based on the Asian carp, known to be able to jump up to ten feet out of water, and are some of the most adaptable fish in the world. This would explain why Magikarp is so common in the games.

Magikarp’s evolution and floppy movements relate to the Chinese legend of the Dragon Gate. If a carp could jump high enough up and over a certain waterfall, it would transform into a dragon. This is referenced in the excellent Pokémon Snap, where the player can launch a Magikarp up a waterfall to make it evolve into Gyarados. While Gyarados could simply be identified as a sea serpent or Chinese dragon related to the myth, his status as a flying-type is equally fascinating. Gyarados may reference the Koinobori, a carp-shaped wind sock used to celebrate Children’s Day in Japan.

The legendary birds, or Titans, consist of Moltres, Zapdos, and Articuno, represent the elements of fire, lightning and ice. Moltres could be inspired by a number of firebirds, like the phoenix, the Slavic firebird, or the Egyptian Bennu, associated with the Sun, and is said to have inspired the phoenix in Greek myths. Zapdos is based on the thunderbird of Native American mythology, a spirit of storms that materialises as a gigantic bird.

Zapdos’ other origin could be the South African mythical lightning bird, a black-and-yellow which can shoot lightning from its talons. Though, the bird also drinks human blood. Can’t imagine Zapdos doing that. Articuno is based on the Simurgh, a benevolent mythical Iranian bird, or at least in physical appearance. Not entirely sure where the ice theme fits in, but Articuno is the prettiest of the legendary birds.

Which are your favourite Pokémon, and which have the most strangest origins? If you have any Pokémon that have weird and wonderful origins that you’d like to share, leave a message below, or on our Twitter or Facebook feeds.