Home » Balancing Gothic Adventure with Coy Humour, Cognition Vol. #1 is As Witty As it is Enthralling 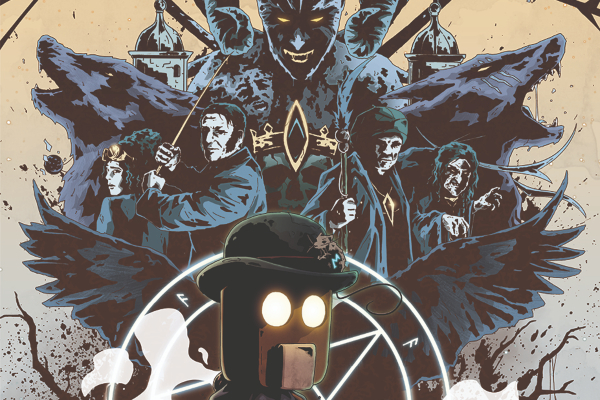 We’ve been easily won over by Cognition since its debut issue in 2016. The brainchild of creator/writer Ken Reynolds, the occult adventure series originally ran for five issues, is now being collected into a trade paperback via Kickstarter, with a bit of help from Comichaus. Even if you’ve been collecting Cognition since day one, it’s heartily recommended that you back this Kickstarter. Cognition has proved to be a series deserving of any praise it can gather. It’s silver-tongued wit blends effortlessly with its adventuresome sense of espionage-tinged folklore horror.

Cognition follows the adventures of Cal and Sigma, one a steampunk-esque humanoid encasing a human soul, the other a demonically-possessed mouse with the pair sharing a psychic link that helps them battle against various demonic forces at play. If that premise isn’t enough to suck you into Reynolds’ and artist Sam Bentley‘s enjoyably freakish vision of pulpy, Victorian-era action, then I don’t know what will. Across the five issues that make up Cognition‘s first collected volume, Reynolds and Bentley craft a distinct, lived-in world for Cognition‘s story to unfold. It feels suitably Neil Gaiman-esque, but rarely feels like it cribs from any one source material. 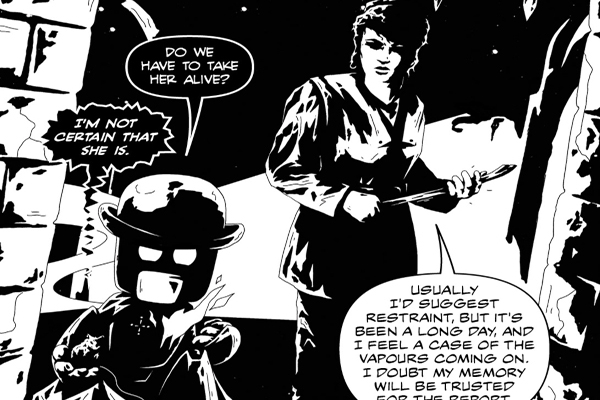 As previously mentioned, the visual spectacles of Cal and Sigma’s routine battles against terrifying demons juxtaposed with the best-of-frenemies attitude the pair have towards each other forms the bulk of Cognition‘s thoroughly fun identity. However, the sly espionage flavour is perhaps this comic’s secret weapon. Cal and Sigma aren’t rogues or vigilantes, they work for B.O.S.S., the British Occult Secret Service and their battles against forces from other worlds arises from their cunning detective work. This low-key motif added to the comic gives Cognition a delicate touch, a subtlety that ensures the action never becomes overblown, and the humour never becomes tired.

Cognition‘s art is as sharp as its wit. Illustrated in black and white, Bentley injects Cognition with fierce visual vigour. He draws characters, landscapes and architecture in a recognisably humanised fashion, yet peppers the comic with an unnerving spiritual vibe. His depiction of the monsters Cal, Sigma and their B.O.S.S. associates regularly face is frequently inspired, in both their designs and how they’re positioned into the comic. Bolstered by Reynolds’ intriguing, layered story-telling, Bentley gives Cognition‘s visual style a tangible edge by delivering a clear distance between reality and fantasy. 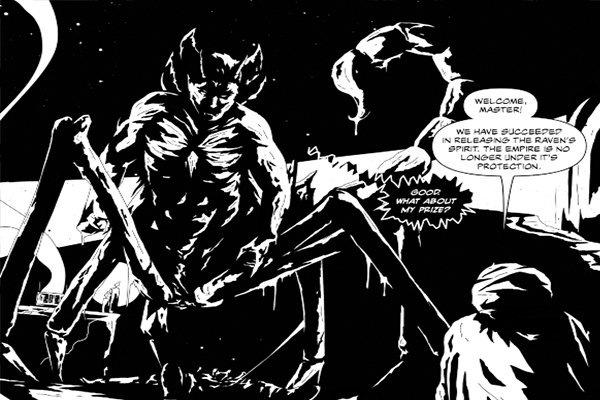 Cal and Sigma are seen often making contact with monsters from some horrid, unknown world, as their investigations cause chaotic frustrations with demonic hierarchy. Despite the limited colour palette, Bentley’s arresting illustrations of this oddly Victorian England and the world of monsters are in no danger of bleeding into each other. He draws them with clear, precise eloquence, making the regular trips into the more frightening of the two all the more thrilling.

Cognition is a masterful piece of work. The action, humour, and art fuse together to create an immeasurable soulful read. Although this latest edition collects the complete run of Cognition, both in terms of how many issues and how much story there is, the fact that this is Volume #1 means we can sincerely hope there will be more of Cal and Sigma’s sarcastic heroism to come.

Will you be backing Cognition Vol. #1 on Kickstarter? Let us know in the comments section below or send us a Tweet!