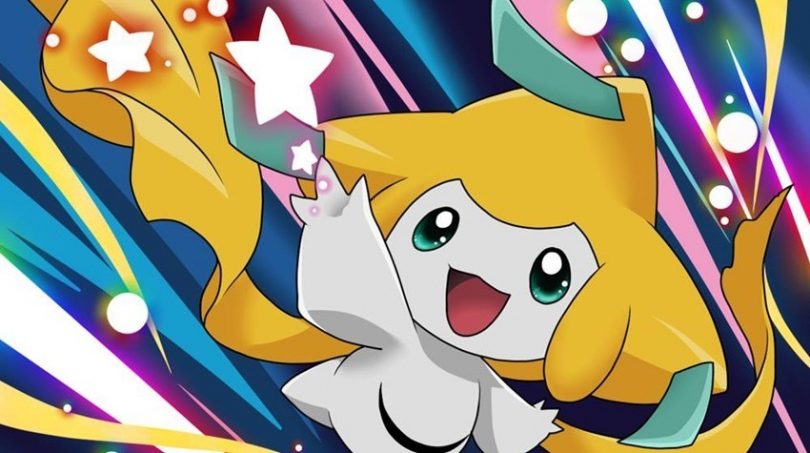 So, I heard you like Mudkips? If you don’t like Mudkips, there is either something wrong with you, or you are just dead tired of ancient internet memes. Speaking of Mudkips, we continue on to volume three of our exploration of the myths behind the Pokémon. In this installment, the third generation of the Pokémon Ruby & Sapphire & Emerald era. The scope of myths used in this generation was phenomenal, from Japanese ghosts, to obscure American alien encounters, it has got it all. But, no we won’t be covering Mudkip. It’s a mudfish meets a axolotl, and is now an immortal meme.

A lot of information and ideas in this article comes from the ever fantastic Bulbapedia. 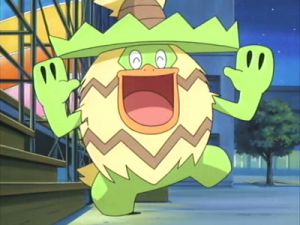 The Lotad evolution line is certainly memorable, especially the jolly, raindancing Ludicolo. At first glance, the line-up take inspiration from lily pads, ducks, and stereotypical Mexican culture, but the Lotad trio’s origins are international. They are especially based on the Kappa, a Japanese water demon, known to either kidnap people, or rob them. The Kappa has a dish-like appendage on its head that carries water, being the source of its power. Ludicolo like to have a good time, reflecting on the merriment often associated with Mexicans. The raindancing element is likely best related with Native Americans, but it could refer to the Kappa’s need to replenish itself with water. It is also suggested the trio may be based on the Amefurikozō, a Japanese yokai that wears an umbrella on its head. 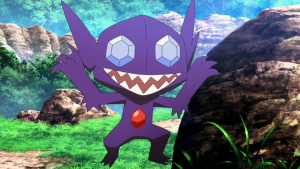 Now, here’s a Pokémon that is marvellous, but makes you wonder what the character designers were smoking. This creepy, purple, diamond-eyed goblin thing lives in dark caves and eats rocks. Believe it or not, Sableye is based on an American alien invasion incident called the “Hopkinsville Goblins”. In 1955, a family group fled their farmhouse to the police station, informing them they had fought off a horde of aliens. These visitors had glowing eyes and resembled goblins, though sceptics suggest they may have been aggravated owls. These alien goblins moved in a swaying motion, explaining Sableye’s often twitchy, sharp movements. It is certainly a strange choice to base a Pokémon, but created a particularly zany, kooky creation. 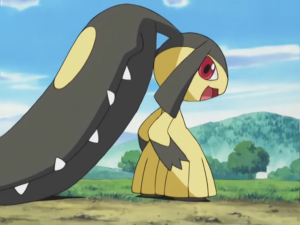 Mawile is known as the Deceiver Pokémon, which fits considering its mythical origins. Mawile is based on the Futakuchi-onna, a Japanese female yokai who hides a second mouth on the back of her head. The second mouth is described as having its own personality, often being cruel to get its owner to feed it. In a prototypical story, a greedy, gluttonous miser married a woman who rarely ate. But, when he noticed his rice supplies were decreasing, he spied on his wife, discovering her true nature. Mawile’s second mouth is described as being formed from steel horns, and it tends to deceive others with its cute appearance before attacking. The Futakuchi-onna appears normal, but can be threatening under the surface, which Mawile pulls off rather splendidly. 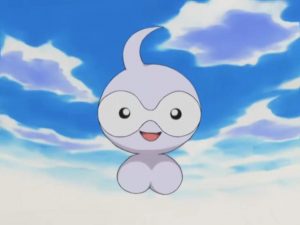 Castform is associated with the weather, and can transform its appearance depending on the forecast. Castform is a dead ringer for being based on a weather balloon, in relation to its form-changing, and ability to float. Castform changes based on sunshine, rain, and icy hail. Bulbapedia suggests that its meteorological shapeshifting is a pun on the English saying “rain, hail, or shine”. However, Castform’s design takes inspiration from the teru teru bōzu, a Japanese handmade doll made from white paper or cloth, and is hung outside homes and temples. They are used to pray for good weather, and to prevent rainstorms. Japanese school kiddies often make these dolls, asking for sunshine, but hanging them upside-down can ask for rain. The term “teru teru bōzu” translates to “shine-shine monk”, referring to traditional Buddhist monks (bonze), but bōzu can mean “bald-headed” too. These dolls are prayed too like paper monks to bring about good weather. 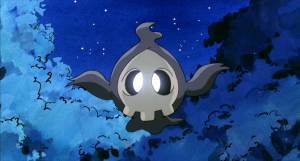 We haven’t tackled any ghost-types yet, and the third generation has a few. Duskull was one of the first Ruby & Sapphire-era Pokémon to be introduced, appearing in Camp Pikachu. This skull-faced, cloaked, cycloptic ghoul is said to spirit away misbehaving children. Clearly, Duskull is based on the Bogeyman in behaviour, and physically on the classic description of the Grim Reaper. The Japanese version of the Bogeyman is Namahage, a hefty, intimidating oni that stalks naughty children to punish them. This is to teach children to behave and listen to their parents. Dusclops is based on the Hitotsume-kozō, cycloptic ghosts, and the Chōchin-obake, another one-eyed ghost created from a paper lantern. 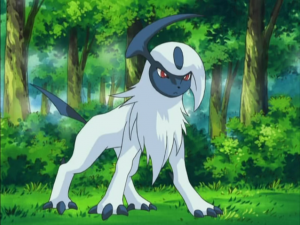 Absol, the Disaster Pokémon, is shunned by most people in-universe, due to appearing as a omen for approaching danger. You’d think having such a friend around would be a good thing. Absol’s purpose and white-furred, horned feline appearance alludes to the Bai Ze, a creature from Chinese mythology. Its name translates to “white marsh”. It can understand and speak human languages, and is gifted with the knowledge of 11,520 supernatural creatures around the world. In legend, the Bai Ze shared its secrets with the Yellow Emperor, which was compiled in a book called Bai Ze Tu, though no actual known copy exists. In Japan, its counterpart is the Hakutaku. Another suggestion is that Absol is based on the Kutabe, a Japanese cryptid that predicted a plague would sweep through Toyama. Other sources may be the personification of death, black cat superstitions, and the sphinx. 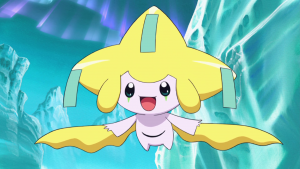 We end volume three with another legendary. Instead of the traditional elemental trilogy, we’re instead including the wish-granting Jirachi. This adorable Pokémon inherits a mixture of international concepts of wishing. Its star-shaped appearance is based on the concept of wishing upon a star, but takes inspiration from genies or djinn. In its mythology, Jirachi only awakens once every a thousand years to grant wishes. This is a reference to Tanabata, the star festival in Japan, which involves writing wishes on paper and hanging them from bamboo trees. The story of Tanabata involves two celestial lovers, the weaving princess Orihime and cow herder Hikoboshi. The two fell in love and married, but spent so much time together that they neglected their divine duties. The King of Heaven separated the two, but Orihime’s tears moved her father into changing his mind, allowing them to meet once a year. The two are represented by the stars Vega and Altair, which appear in bright in the late summer sky.

Which Pokémon are your favourite, or have the most interesting origins? Leave a comment below, or on either our Twitter or Facebook feeds. Don’t forget to also check out our previous examinations of Pokemon’s origins!