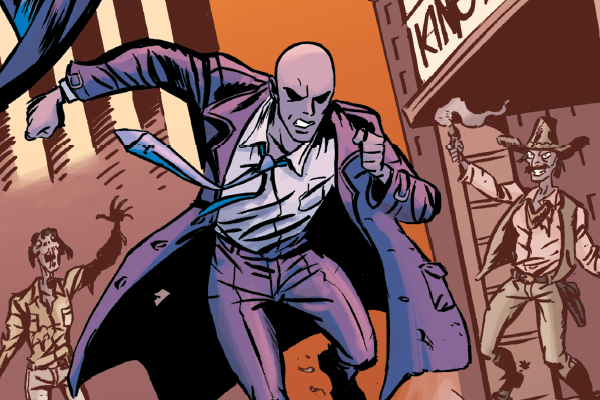 Comichaus‘s has enjoyed great success as the self-described ‘Netflix for comics’, but they’ve also been steadily growing their portfolio as a publisher. At the centre of their publishing operations is their own anthology, along with numerous one-shots and ongoing series, including Lizard Men, Close, The Forest, the Chair, and Those Forsaken There, City of Lost Souls and 32 Kills. May 2019 saw the release of their latest homegrown title, a further one-shot titled The Catalyst. The signature bonkers, action-packed themes that make a good Comichaus comic are all there, but The Catalyst feels oddly lacklustre. It’s ideas don’t fit the issue it’s written and drawn in.

The Catalyst has a wonderfully endearing premise of its main character trapped in a dead-end, 9-5 job. It just so happens that our downcast hero, Guy, is an android tasked with jumping into various alternate universes and acting as something of an enabler of positive methods in resolving toxic scenarios. Writer Nick Bryan, who’s past efforts include the similarly quirky The Little Deaths of Watson Tower, delivers a well-crafted sense of humour with Guy’s efforts. From attempting to quell warring superheroes to encouraging a plague-ridden society to accept a cure, his work routinely doesn’t go welcomed in these antagonistic worlds. It’s delightfully daft, yet sincere, and has heart to its story in the form of Guy’s introspection at the state of his unappreciated existence. 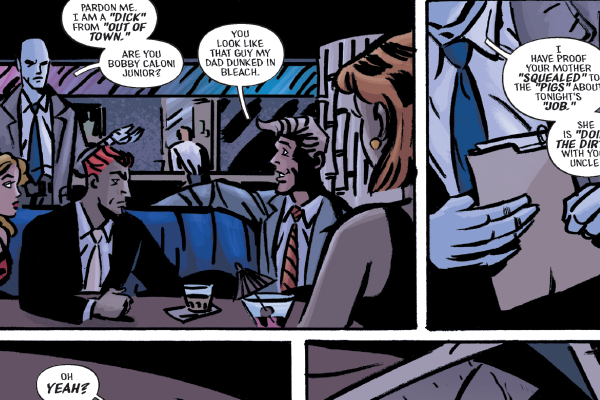 The problem lies in its pacing. From a well-tuned opening sequence set in a grimy, neon-baked crime drama, The Catalyst becomes a spry affair, so spry that its feet don’t touch the ground. The crisis of confidence Guy experiences in having his efforts flung back in his face feel disingenuous when the comic barely has the time to let his travels settle and flow with a lived in pace. Guy’s adventures are oddly boxed within tight, compressed panels too, which does a disservice to The Catalyst‘s visual as a whole.

Artist Robert Ahmad, colourist David Cooper and letterer Hassan Otsmane-Elhahou compliment Guy’s universe-hopping antics with an intoxicating, full-throttle style. They effortlessly give each location its own distinct tone, from the retro video game vibes of landing in a medieval-themed world to the Nosferatu-tinged black and white vibes of a world featuring vampires and humans, their joint efforts give The Catalyst a buoyant visual thrust. 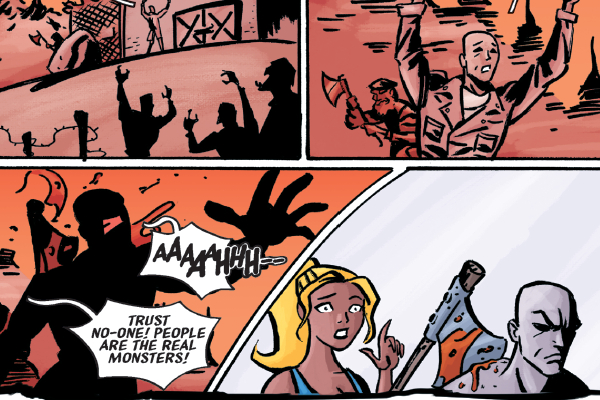 It’s all the more frustrating then that The Catalyst feels over before it’s barely begun. This is a story who’s premise can effortlessly be transformed into either an ongoing series or a full-length TPB. At just a solitary issue, its worlds and characters don’t feel as fully explored as they ought to be. With its powerhouse of talent, The Catalyst yearns to be something larger than what’s presented here. Adding to this, The Catalyst also contains a further, shorter story set in a twisted, magical land, one of numerous worlds probably on Guy’s bucket-list. Wanted: Brave Warriors is cute, silly and full of the same heart as The Catalyst itself.

It should be stressed that this is a good comic. The endlessly enjoyable art is matched by the deadpan story-telling growing more soulful towards the end. When visiting a world ruled by fellow robots that’s dogged by a human resistance, Guy attempts to break the system he works at by subverting the ethical path he’s been tasked with delivering. Such a move points towards the grand sense of scale and adventure The Catalyst could easily be amplified by if it had a larger canvas to run riot on. That’s the greatest compliment one can pay The Catalyst – it leaves you wanting so much more, in every sense.

Will you be hopping through the multiverse to catch your copy of The Catalyst? You can do so through Comichaus. Let us know in the comments section below or send us a Tweet!