Home » Why Spider-Man: Far From Home Had the Best & Worst Post-Credit Scenes 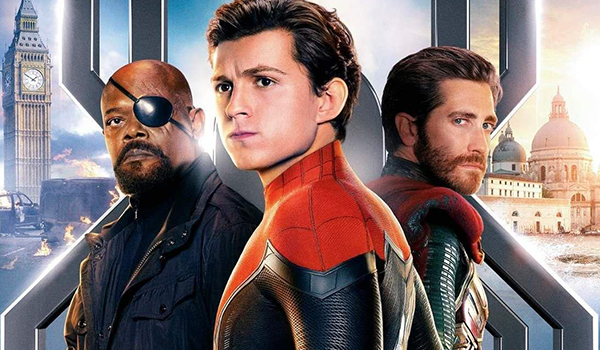 It’s Marvel tradition to include post-credit scenes in its films. We all know this. It’s been going on since the Nick Fury reveal back in the first Iron Man.

I mean, that was Nick Fury, right?

I’m getting ahead of myself.

Let’s start with the mid-credit scene.

The mid-credit scene picks up directly after the last scene in the movie proper, with Spider-Man and MJ finishing their swing through the city. While the scene ultimately acts more like the final scene of the film (much like the UN scene in Black Panther), the break created by the credits improves the pacing of the scene and gives it more impact (again, like in Black Panther).

Once the couple are back on solid land, a breaking news story comes out revealing that Mysterio had one final trick up his sleeve – a video framing Spider-Man for the attack in London and outing him as Peter Parker.

Let’s stop there for a second. This is a brilliant idea. It’s exactly the kind of thing that would happen to Spidey in the comics. Also, some are speculating that it implies Beck is still alive, but the eagle-eyed will remember William took a flash drive with him as he was escaping in London, so it’s more likely the video is his work.

So far, so good. The scene hit all the requirements for a post-credit scene: it’s funny, it’s relevant to the overarching MCU plot and hints at the future of the character.

But then, in a moment that was just chef’s-kiss-worthy perfection, the scene included a cameo from J.K. Simmons reprising his iconic role as J. Jonah Jameson.

F***ing brilliant that is.

Marvel did a brilliant job keeping that cameo under wraps and the payoff is just amazing. Will we see more of this version of Jameson in the future? I think it’s safe to say I speak for all Marvel fans when I say “We mostly certainly hope so!”

The scene reveals that the Nick Fury and Maria Hill we saw in the film were actually Skrulls Talos and Soren. The real Nick Fury is off in space somewhere doing… something? We don’t really find out.

This scene was just all over the place and it raised too many questions about the history of the MCU. We know the real Nick Fury was on Earth during the events of Captain Marvel, but now we don’t know if we ever saw him again in any of the future films. Was it always Talos? Does Maria Hill even exist or was she always Soren?

A much better reveal would have been that Nick Fury had been in space since the events of Endgame and the version we saw on Earth was actually another of Mysterio’s illusions. It would clean up a few plot holes, namely why would Beck involve the real Nick Fury, the most paranoid man on the planet, in a scheme that relied on gaining Fury’s trust? Fury should have been suspicious from word one.

But if the Fury we saw in the film had been another illusion, it would streamline the plot. Beck and the other ex-Stark Industries employees somehow got the E.D.I.T.H. glasses, realised they were coded to Peter Parker, and then set up the whole Mysterio/Elementals scheme to gain access. Instead, the film plays it almost like Beck just lucked into finding the glasses and worked that into his plan, instead of the other way around.

Anyway, I digress. The main point is that the end-credit scene left on such a “WTF” note that it was like a bad aftertaste after a nice sweet dessert.

What did you think of Spider-Man: Far From Home‘s post-credit scenes? Sound off in the comments below or let us know on Twitter.