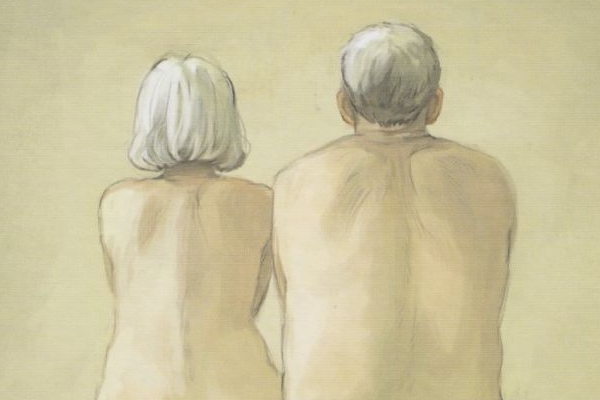 We recently had the pleasure of reviewing SelfMadeHero’s tale of romance between lovers in their twilight years; Blossoms in Autumn. Written by acclaimed comics creator Zidrou and drawn by Aimee de Jongh (who’s debut graphic novel The Return of the Honey Buzzard won the 2014 Prix St Michael award for Best Dutch comic), Blossoms in Autumn‘s fusion of playful story-telling with some heart-warming, down-to-earth visuals made for truly pleasureable reading. We recently caught up with Aimee de Jongh to discover more about the process that went into drawing the comic.

A Place To Hang Your Cape: How did you join Blossoms in Autumn?

Aimee de Jongh: I came on board through my Belgian publisher, Dargaud. After they had translated and published my first book, The Return of the Honey Buzzard, they called me in their office to talk about future books. The editor then proposed working with a scenario writer, since they had some of the best in their trade working for Dargaud. She mentioned Zidrou, as an example, and immediately I responded with enthusiasm.

I had read many comic books by Zidrou as a kid, and I was a big fan of his series Tamara. And as an adult, I had some of his more serious comic books, which were even more amazing. The subjects always resonated with me. They were about personal topics, relationships between humans, about love and death. Zidrou has a reputation for crossing lines, too. For example, he wrote a book about a secret love affair between an brother and a sister. Somehow I was intrigued by this guy, and I was certain that working with Zidrou would take me to the next level. So we got in touch, and he loved my work, too. Within a few weeks the contracts were signed. 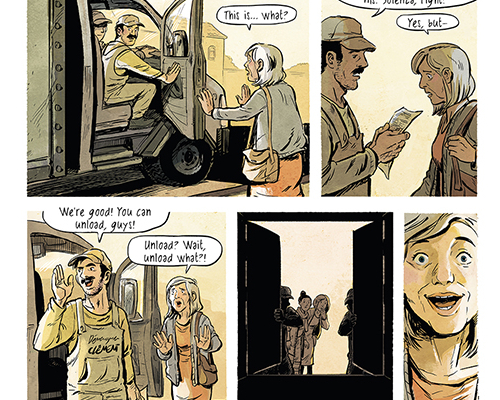 AP2HYC: What was your process in bringing Zidrou’s narrative to life?

Jongh: In the Summer of 2015, which seems ages ago now, I visited Zidrou in Spain. We had decided to do brainstorm sessions for a few days, to make sure we would both agree on the first draft of the story. We spoke about the subject, which was love at old age, and we talked about the characters. I made some first quick sketches, and although I managed to design the male character pretty quickly, I couldn’t figure out the female. She was looking too sad, too old, and a bit bored. That’s not great if you want to tell a positive love story! So Zidrou helped me with some suggestions, until we had two characters we both loved. After I left Spain, Zidrou started writing the full scenario on his own (which took him 6 months) and delivered it to me. I started drawing then (which took another 2 years). Through the process we were in touch regularly to discuss scenes, dialogues and drawings.

AP2HYC: Your art communicates the uncensored nature of Ulysses’ and Mediterranea’s relationship quite effectively. What was it like for you to draw a very unflinching take on aged romance?

Jongh: It was lovely. To be honest, this was the part of the book that I loved drawing most. And it surprised me, because I’m actually pretty prudish normally. But years ago, as student at the arts academy, I spent hours and hours live drawing nude models. I had kind of forgotten that I enjoyed that immensely. The anatomy of the human body just fascinated me, with all its lines and shapes that you can’t imagine.

When I read the first draft of the scenario, and I found out that there would be uncensored scenes in it, I was pretty excited. I hadn’t drawn nude bodies in ages, but I felt that I could do it. Drawing those scenes took me back to the academy, and it reminded me of the joy I had in those days. I also think the intimacy of the book is not just present in the scenes of making love, but it takes place in their conversations too, and it’s visible even in their gazes. That was much harder to draw. 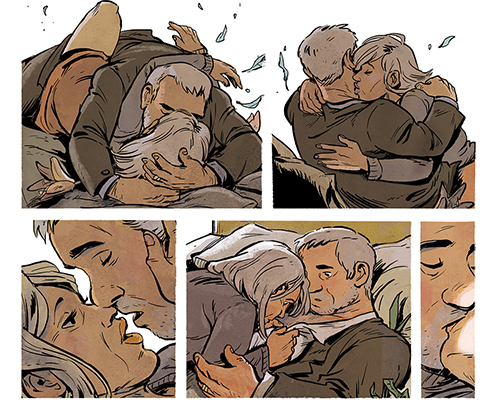 AP2HYC: Blossoms in Autumn is full of warm, earthy colours which complement the moods Zidrou’s narrative conjures. Of the three colourists who worked on the comic, which colours were yours?

Jongh: Actually, the colouring was a very painful process – but very insightful too. All colours were done digitally. Marcia Patricio was the “flatter”, as they call it. She only did the initial flat colours in the drawings, without shades or lighting effects. Michael Doig, who is actually an animator, then worked on top of these flats to create a fully rendered page in colour. In the end, his colours were too saturated for the tone of the story. They were not corresponding with the earthy tones I had in mind. It was quite painful, but I decided to paint partly over his colours, and finish the rest of the book myself.

Of course, the last thing you want to do when you hire someone is to tell them their work was not good enough. But Michael was really understanding and he even told me he had learned a lot by working on the book. For me, I found out through this process that it’s almost impossible for me to explain what colours I’m looking for. Most of the time I don’t even know what I want. I just try this, and try that, and try again until something fits. Maybe I’ll just have to admit that working with colourists is not the most efficient choice for my way of working.

AP2HYC: Has working on Blossoms in Autumn broke any new ground for you, as an artist?

Jongh: My drawings have grown so much between my first book and this one. I’m convinced that happened mostly because of Zidrou. To be honest, during the first year of working on this book, I started over four or five times. I was just never satisfied. I tried drawing on paper, then digitally, then on paper again. I remember those struggles still, as they were very frustrating. I truly felt the “impostor syndrome”, and was ready to admit to Dargaud that they had hired the wrong artist for this book. The pressure of working with a big shot as Zidrou was holding me down immensely. 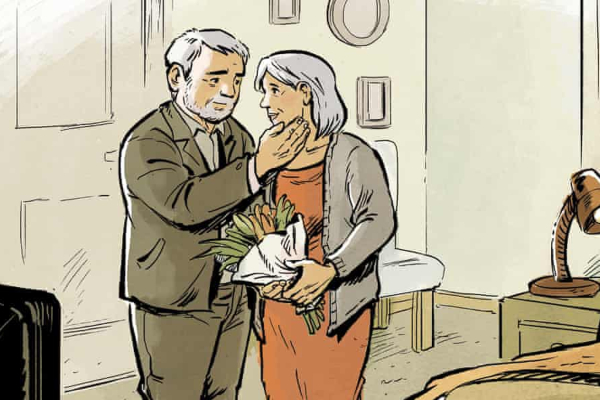 Later, I pulled myself together and I just started drawing – mostly because I was running out of time! But I was suddenly at a much higher level, and the drawings looked so much better than I had expected them to look. I figured that what saved me, was exactly the same pressure: The fact that this book had to be of a good quality, meant I had to deliver. The pressure took me to a higher level. Right now, I’m a better artist because of this book.

AP2HYC: Do you have any other projects in the works?

Jongh: I’m working on a graphic novel called Days of Sand, which is my first work of historical fiction. It takes place in 1936, Oklahoma, when dust storms were making the lives of American farmers impossible. The poverty, drought and imminent death made many farmers decide to leave their homes, and travel to California in search of a better life. The US government sent out photographers to document their struggles, through the so-called FSA Photography Division. The story is about a fictional photographer working in this time. It’s a book about the dilemma’s of photography and journalism, against a background of climate change and migration.