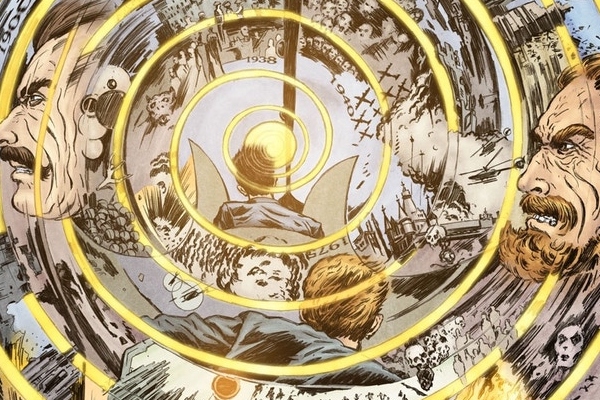 Passion and practicality must go hand-in-hand for any creative project. The enthusiasm is paramount, but the tools to effectively and efficiantly communiate that enthusiasm to the audience is as vital. With a comic as enthusiastic as Steven Peros and Barry Orkin‘s Stoker & Wells: Order of the Golden Dawn then, it’s all the more of a shame that the comic is let-down by a jumbled execution, one that contains unfocused character development and an unnecessary amount of telling in place of showing.

Let’s be clear that Peros and Orkin’s genre-busting sci-fi/horror comic has a spirited premise. It tells the fictional account of acclaimed genre authors H.G. Wells and Bram Stoker (authors of The Time Machine and Dracula, respectively) crossing paths in London in the late 1800s and proceed to embark on a horror-filled, time-travelling adventure that inspires them to write their best-known works. The pair are flung some 4000 years into a future London that’s receeded into a primal state, where a harmonious society is not all that it seems. Stoker & Wells: The Order of the Golden Dawn nimbly balances the science fiction and the horror as a means of grounding its overall purpose of enabling Stoker and Wells to become the highly regarded authors they’re destined to be. 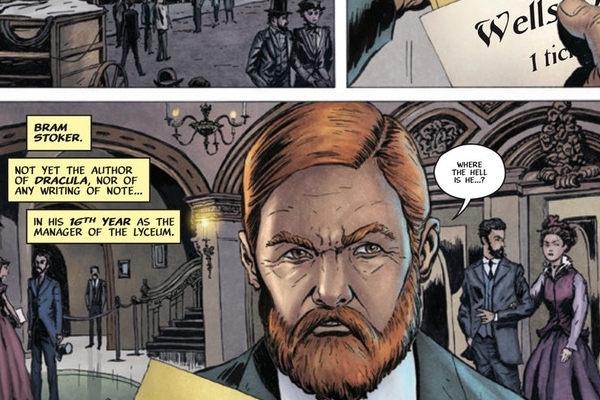 A source of enjoyment in the comic is the clash of personalities between the pair. Peros writes Wells as decadent and spontaneous, whereas Stoker is aggresive and downbeat. Their relationship evolves haphazardly however, as we learn of some deep-seated psychological issues for Stoker involving vampires from his childhood that goes onto contextualise the comic’s horror themes, but it’s shoe-horned in at an unsatisfying pace. The comic’s grappling with time travel is more robust, even if an air of cluttered mystery is moulded as to the origins of this strange land that Stoker and Wells land in.

Punctuating their adventures at random intervals are bouts of narrative description that fails to enhance anything, because it’s often obvious what’s happening already. Orkin’s illustrations bear a rugged quality that captures London in the 1800s more imaginatively than it does London in the 5000s. The colours shift hands between the comic, with Chris Summers‘ dulled and generic style illuminating the first half of the comic, whilst Studio Haus packs in a better sense of vibrancy in the second half with a more diverse use of colours. There’s an odd use of panle structure at play in Order of the Golden Dawn, too. Often, the action is scuppered by characters crammed into minute-sized panels, placed awkwardly against larger panels that run the risk disorientate the reader. It’s a curious creative choice. 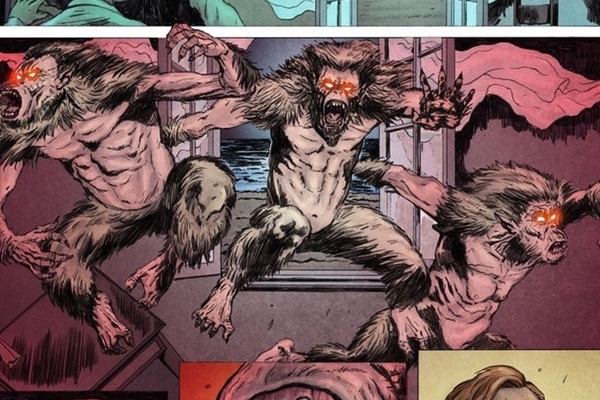 If nothing else, Stoker & Wells: Order of the Golden Dawn is a fun, action-packed celebration of the genres Stoker and Wells would go onto inspire countless readers and writers with. Peros and Orkin clearly have an absolute blast placing these figures in a fresh fictional setting, and that enthusiasm radiates well. What lets this comic down is a lack of creative focus. The pieces are all just about there, but sometimes not in the right places. However, Peros and Orkin aren’t done with their take on these famous literary figures just yet. This first volume in a proposed trilogy will be followed up with Stoker & Wells: The Ashes of Revenge. Hopefully this forthcoming second volume will give Peros and Orkin the chance to sharpen up the skills the duo have begun to exploit here.

You can discover more about Stoker & Wells: The Order of the Golden Dawn from Steve Pero’s website. Did you back the comic on Kickstarter during its campaign? Let us know in the comments section below or send us a Tweet!