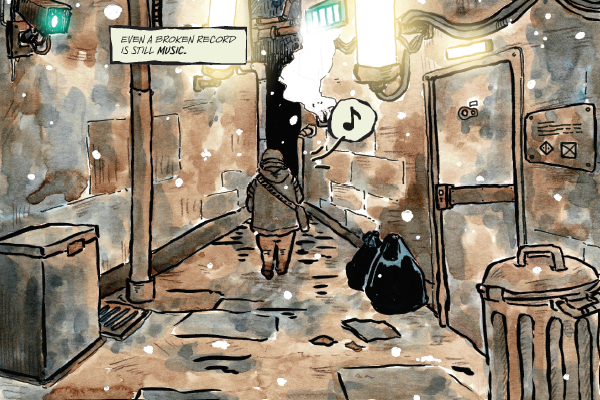 It wasn’t until I read Rick Quinn‘s Earworm for a second time that its subtle foreshadowing became more visible. Quinn has carved out a distinct niche for himself with his output of cerebral-themed one-shots, including Spirit Drifters, The Ghost Butterfly and Saltwater. He routinely packs in complex ideas into his work that reward repeated reading, and Earworm is no exception. However, like the cryptic moods of crippling nostalgia it carries, Earworm drags along some less than successful creative elements that somewhat scuppers its delivery.

In terms of its aesthetic, Earworm triumphs as a superbly beautiful comic. It’s narrative and visually serene, lullaby-esque nature snaps into life with its darker undercurrents. The story takes place in a Blade Runner-esque neon-soaked metropolis. A most recognisable sort of landscape, with lives stuffed into its bustling streets. However, these streets are strewn with snow that’s as melancholic as it is foreboding, drawn and coloured by artist Martyn Lorbiecki with confident delicacy. Those very lives are flung into danger when policewoman Minnie is caught up in a string of perplexing deaths that feature their victims heads being blown to pieces. Linking the victims is that they had their heads caught up in music, which Minnie soon unravels into a horrifying truth. 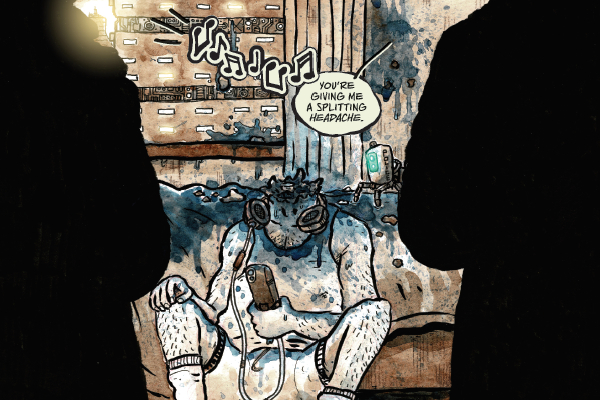 At a mere 18 pages long, Earworm is forced to cram in its story and themes like the story’s city crams in its inhabitants. It’s an odd thing to discuss the idea of pace in a comic, since so much of the reader’s view on pacing is to do with the speed at which they themselves read the comic. However, in Earworm‘s case, one of its most striking aspects is how its over before you know it. Its ideas, its art, and sense of scale are wholly deserving of a larger platform.

As the mystery surrounding the deaths becomes clearer, and Minnie herself succumbs to what kills her detective partner, the comic proceeds to explain itself as much as it shows itself. For a comic as geared around its visuals as Earworm is, I would have welcomed a greater emphasis of showing rather than telling, something a larger platform might have offered. Earworm utilises its slow-burning horror motifs to comment on the damaging effects of nostalgia, how music can act as a trigger of remembering past events, and how some events are best left unremembered, due to their harmful qualities. The rising nature in how Quinn and co-script writer Milton Lawson execute this is stirring. My aforementioned second reading reflects how they carefully lay down all the necessary pieces of the mystery at all the right moments.

Complimenting all of this is Lorbiecki’s meditative, luxurious art and illustrations. Earworm has no difficulty in establishing its visual tone. Lorbiecki draws this superbly lived-in world in a compacted fashion that avoids feeling overly compressed. The near-futuristic technology and landscapes laced with snow are evocatively eye-catching. Lorbiecki makes use of a distinct colour palette too, flourishing Earworm in a solitary mixture of watery greys, whites and browns. Only when Minnie and her team uncover the reason behind this string of deaths does an other-worldly burst of colour infect the comic to great effect. It’s sickeningly swamp-like, highlighting the story’s message of nostalgia’s self-destructive aspects. Hassan Otsmane-Elhaou‘s lettering blends in with the art well, distinguishing separate dialogue and adding to the overall downbeat mood. 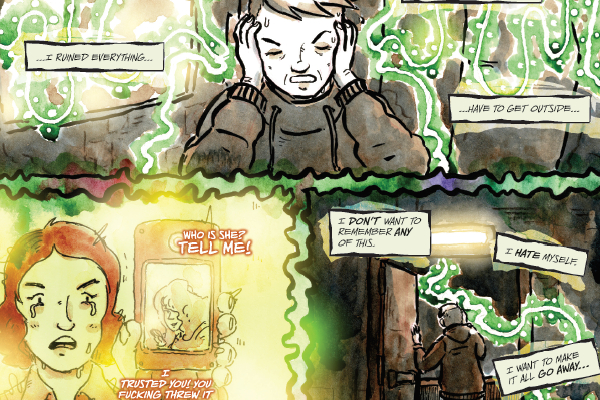 It’s all the more frustrating then that the comic’s grand, grotesque climax is clipped by its art being stuffed with further dialogue. It’s here that Earworm‘s issues with its excessive telling become apparent. The visuals carry the soaring emotions and narrative impact necessary to make the climax make sense and latch onto the reader’s mind long after finishing the comic, making the abundance of accompanying text unnecessary. Oddly enough, the comic’s coda is, in fact, almost devoid of speech entirely, and in the space of four panels allows Earworm to end on a grim cliffhanger. Like a good tune, the horror of these murders linger still…

Earworm shows its cards a little too often to be as creatively successful as it aims to be. A longer page length and less reliance on exposition would possibly allow the art and the story to be more balanced, and for its themes to breath at a better pace. Ultimately, Earworm still manages to telegraph its message succinctly, it just could have exploited its surreal ideas better. If anything, it makes me desperately want to read a full-length graphic novel from Quinn. This, and past comics, shows he has the imagination and the control to deliver something remarkable. But for now, Earworm is a riveting reminder of what a thoughtful teller of stories he is.

You can discover more about Earworm by reading a four-page preview from Rick’s website. A suggested soundtrack for the comic can also be played via Spotify. Will you be pricking your ears up to this comic? Let us know in the comments section below or send us a Tweet!