Writer Dominic Archer has teamed up with an impressive line-up of artistic talent to bring A Boxer to life via Kickstarter. To be published through BHP Comics, A Boxer charts the journey of a young fighter on a surefire path to success in the world of boxing, but forced to come to terms with his homosexuality in the hypermasculine world of violent sports.

We caught up with Dominic to discover more about the comic!

A Place To Hang Your Cape: What inspired you to write this unique-sounding comic?

Dominic Archer: A Boxer was inspired by a combination of the media I was consuming at the end of 2018 and where I was living. At the time I was doing my second stint in China and was approached by a number of my students who wanted to ask questions about LGBTQ rights in the UK, before telling me that they were gay themselves. This was a big step as they were all concerned about how their families would take the same news. Their courage in coming forward led me to further question my own identity, as these students faced a cultural barrier that my generation has often taken for granted, yet they were much more certain about their sexuality than I was my own.

This experience clashed with a boxing related podcast called Finding Drago that I was listening to at the same time and the story really began to write itself.

AP2HYC: What kinds of themes may be running throughout A Boxer?

Archer: As with a lot of my work, perhaps the biggest theme in A Boxer is legacy and how much we are able to define our own legacy in the present day. As so much of self-identity and how we are remembered is dictated by how other people perceive us, the protagonist of A Boxer is often caught between who he is and how he is seen. The book tries to show how those two are at odds and the ramifications it can have. 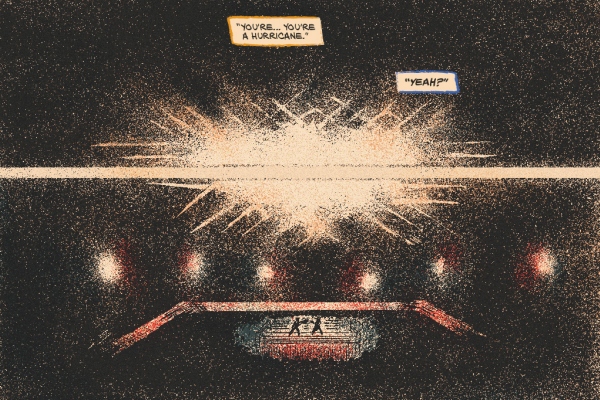 AP2HYC: Are there many comic biographies of gay sports people already out there?

Archer: There are a multitude of amazing LGBTQ sports comics for readers to discover. Ngozi Ukazu’s ice hockey comic Check, Please! was a big influence on how we approached Kickstarter because Ngozi has managed to master the transition from webcomic to published book in a way few other creators have. C.S Pacat and Johanna the Mad’s Fence is another great example of normalising LGBTQ characters into the narrative and reading how well this was received shaped a lot of my thinking.

I remember one review that was titled something like “Fence shows it’s not all about winning.”

In A Boxer, that is not the case. A professional fighter has a very limited time to make their mark on the world before they either retire or are retired and that is a stress that is very much in play on our protagonist, Mike Shepherd.

AP2HYC: Does A Boxer take any inspiration from other media?

Archer: As I previously mentioned, A Boxer was largely influenced by the podcast Finding Drago and the author that it investigates, Todd Noy. Noy’s work was often built around the mentality fighters require to step into the ring and that was something I wanted to contrast with the more intimate moments of our character’s lives.

To accentuate that divide, we looked towards building theatre techniques into the art as much as possible. Comics are often compared to cinema but I think they are a great many comparisons to theatre that are often unexplored. Many of the most personal scenes that take place in A Boxer feature a spotlight with the rest of the ‘stage’ in complete darkness to literalise the sense of isolation Mike Shepherd feels. 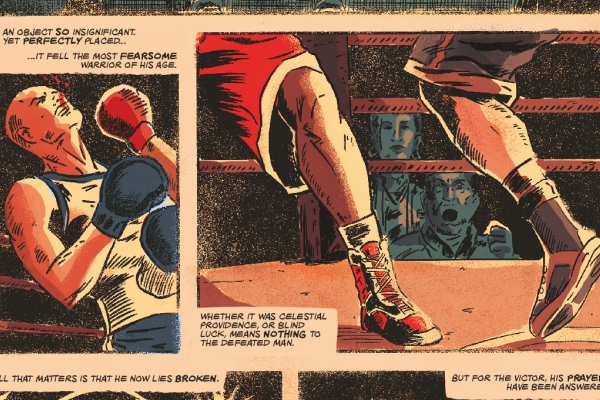 AP2HYC: The comic boasts a large and talented creative team, how did every come aboard the project?

Archer: I have been fortunate enough to work with penciller Gary Welsh and inker Marc Casilli for a number of years. We studied our Masters degrees in Comics in Graphic Novels at the University of Dundee together and have collaborated on numerous projects. They are also two colleagues to whom I will spitball ideas and when they say “This is a good one,” I know it is worth running with.

Amanda Miranda (our colourist) is, like Marc, a Brazillian creator who has made a real impression on the Sao Paulo independent comics scene. She won the 2019 Dente Award for Best Independent Comic and when Marc suggested we ask her to join the team it was an easy sell.

Our letterer, Hassan Otsmane-Elhaou, came highly recommended from every person I spoke to, and when you see his bibliography it is easy to see why! He has worked on titles such as Peter Cannon: Thunderbolt, Killer Groove, Shanghai Red, Lone Ranger, he hosts the acclaimed Strip Panel Naked YouTube channel… oh! And he is the Eisner Award winning Editor of Panel x Panel magazine. The moment he agreed to come onboard, we knew the book could be something special.

AP2HYC: What qualities would you say everyone brings to the comic?

Archer: I have collaborated with Gary and Marc on numerous projects and know that their styles complement and expand on one another. Having studied together, we also share a comfortable relationship of being able to discuss when something isn’t working. That may not sound so important, but a lot of creators can be very precious about their efforts so that bond is invaluable when building a 100-page graphic novel.

Hassan contributes a knowledge of the comics medium that is second to none. There’s no other way to put it!

Amanda’s colours are where a lot of the magic happens and the vibrancy of the book comes alive. She brings a vintage texture to the page that creates a timeless feel in a very modern narrative. 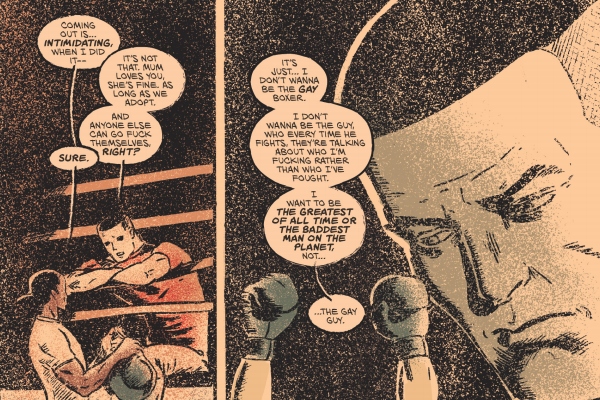 AP2HYC: What kind of visual style would you say A Boxer has?

Archer: Perhaps my favourite thing about the artistic approach to A Boxer has been in trying to do as much of it traditionally as possible. While the colours and letters are digital, the pencils and inks being done with actual pencils and inks brings a character to the pages that Amanada’s colours emphasize further. The art looks like it should feel rough to the touch, that it should crumple in your fingers. There is a fragility even in the design of the paper that we hope carries over into our protagonist.

AP2HYC: How did BHP Comics join the project?

Archer: In June 2019 I attended the Comic Salopia convention, pitch in hand and managed to ambush multiple publishers into sharing their thoughts. It was Sha Nazir of BHP who said “realistically, if you want to make a 100-page graphic novel with a five person creative team you’re going to have to get funding.”

There was no attempt to change the format, artistic direction or creative team, just an honest and professional conversation about how the British comics industry works and how independent publishers face an up-hill battle when funding work like ours.

So A Boxer is heading to Kickstarter to get Gary, Marc, Amanda and Hassan the money they need to make this book and BHP are onboard to handle printing and distribution.

AP2HYC: What’s been the most rewarding thing for you in being able to tell this story?

Archer: By far the most rewarding thing is seeing the book come together and watching how people have reacted to the art and the story. The reviews and feedback have been really encouraging and that makes me even more excited to see the finished thing.

You can discover more about A Boxer via its Kickstarter campaign. Will you be backing the comic? Let us know in the comments section below or send us a Tweet!