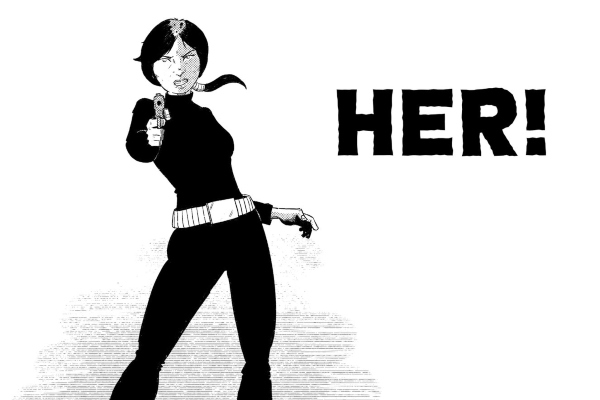 Back in August of 2019, David Taylor lied to us. The Scottish comics creator presented The Grave as a Frank Miller/John Wick inspired revenge thriller, but what we found was a comic that featured some unexpected progressive values and thoughtful character dramas. What began as your typical revenge story turned into something quite different. The Grave rapidly found an eager audience, smashing through its Kickstarter goals during its crowdfunding campaign and raising nearly £3,000 against a £400 goal. Now, Taylor has returned to Kickstarter to crowdfund the feminist-tinged action noir one-shot HER Prosperity, the sequel to his earlier work HER!. Leaving the sprawling character dynamics of The Grave behind, HER Prosperity stands as a sharp, compacted thriller that’s modest in its format and engrossing in its themes.

HER Prosperity is a marked evolution from HER!. Both comics follow the espionage adventures of a nameless female assassin, but where HER! felt muddled in its execution, HER Prosperity is a tighter, more succinct affair. Born as a 20-page short comic, HER! is defined by dueling perspectives from its characters. Two halves of the comic are framed from two clashing points of view, the heroine and the male antagonist. However, such a narrative tactic ended up removing much of the agency of the heroine, as if she wasn’t allowed to tell her own story. Wisely, Taylor shifts things into separate gears for HER Prosperity. Abandoning the page-sized panels and duo story-telling voices, Taylor opts for a more traditional layout with HER!‘s follow-up. With our nameless heroine compelled to join the search for a missing 19-year-old girl, HER Prosperity blossoms from an action-thriller to a forceful comment on how a world exploited by men can easily be upset by powerful women. 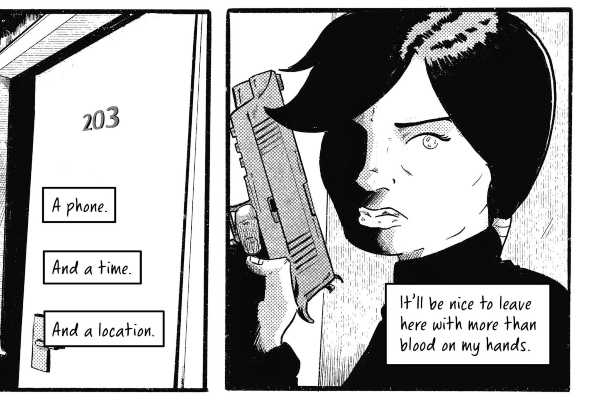 The heroine’s hunt leads her deep into the grim world of organised crime, where men command all they see and acquire any desire they wish. Communicating the danger of the comic is a smooth, rather-sharpness found in the art. A step in a different direction from the stern, ragged styles of HER!, HER Prosperity features further noir vibes that dominate Taylor’s output. A dexterous use of shadow and light is employed throughout, capturing the characters as if in some long-forgotten cult classic of noir cinema. However, HER Prosperity‘s art is also considerably more lithe than Taylor’s past work. It’s as if he’s trying to match the empathetic leanings of his nameless heroine, who only turns to violence in the most desperate of moments. 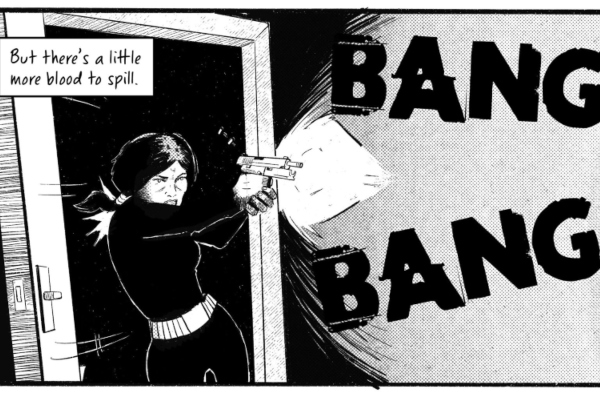 Beyond this welcome sense of empathy, the compact nature of HER Prosperity doesn’t entirely lend itself well to engrossing characters. With no name and fueled by a singular desire to trace this missing girl, some unintentional superficiality come to the boil in our heroine. It’s somewhat hard to engage in a character at such surface-level motives, but perhaps that’s the point. HER! pushed the idea that this heroine dives in and out of the shadows, rarely seen, a mystique surrounding her. HER Prosperity has the same ideas, evidenced in how both comics dramatically only refer to this assassin as ‘her’, but isn’t quite there yet. That’s one instance where the separate perspectives works in HER!‘s favour, but in HER Prosperity the stronger story-telling results in that attempted mystique being somewhat lost.

What is more creatively successful is HER Prosperity‘s muscular feminist stance. It’s a joy to see the heroine take down toxic male abusers whilst doing everything she can to rescue women at the mercy of these men. It’s a welcome, continued step in a progressive direction from The Grave. Taylor’s combination of smart, sensitive ideas placed within an action-noir setting continues to give him a distinctive voice. HER Prosperity is particularly recommended as an concise introduction to his style of comics. Bristling with artistic personality and never skipping on the action, HER Prosperity wins.

You can discover more about HER Prosperity via its Kickstarter campaign, as well as find out more about Taylor’s comics from his website. Will you be backing the comic? Let us know in the comments section below or send us a Tweet!