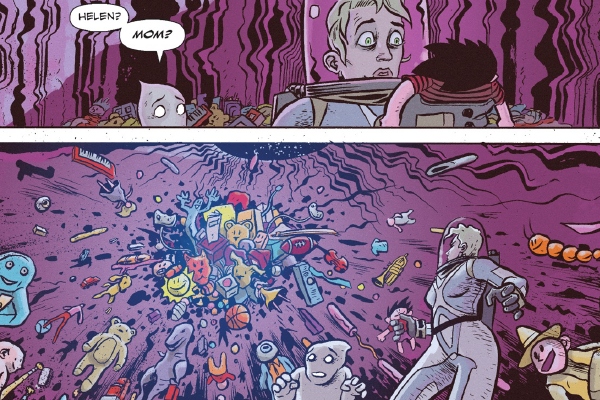 Dave Chisholm‘s Canopus is a complex comic to unravel. It follows the unnerving story of Doctor Helen Sterling, who awakes in an amnesiac state on an unknown planet, with only a friendly A.I. Arthur for company. As she treks across the planet searching for answers, her memory bites back into life, piece by piece, revealing a tragic backstory explaining her solitary presence.

With its surreal artwork and engrossing story, we found a lot to enjoy about this four-part series from Scout Comics. Grappling with themes of forgiveness and resentment in a manic fusion of sci-fi, comedy and horror, we caught up with Dave to probe deeper into the psychological heart of Canopus.

A Place To Hang Your Cape: Canopus effortlessly blends horror, science fiction and comedy. What inspired you to produce this comic?

Dave Chisholm: Thank you for picking up on this stuff – it’s really cool that this work communicated all of that to you. While this story blends these various genre elements together, the initial inspiration for Canopus began with me working through some of my own problems. The core emotional inspiration for Canopus is rooted in my own struggles in understanding the concept of forgiveness or the idea of letting go of resentment. Resentment is a crazy thing – it can be directed at a person or a group of people or a random act of nature or just some bad luck. There’s that famous quote, “resentment is like taking poison and waiting for the other person to die.” It’s easy to give forgiveness lip service, but actually embodying it is so damn hard.

It’s challenging to not still have a hot ember of anger at your core while projecting a facade of letting go. As Helen learns her past through Canopus, she learns that, like so many of us, the tentpole moments of her life, those moments that carved her into the person she is, were characterized by pain, disappointment, bad luck, and betrayal. The specifics of a number of Helen’s resentments also reflect my own life, albeit through the funhouse mirror of comics where global stakes stand in for personal troubles and problems unfold over the course of 5 panels instead of 5 years. It’s like poetry in a way – you have to communicate so much in a relatively small space.

So, yeah, the act of forgiveness, especially in the absence of contrition, has long seemed a wishful impossibility to me. The process of making this book helped me in finding a way out of this bummer mental loop. The sci-fi/horror/comedy elements work as a conduit for these personal issues and allow me to combine them with some big, cosmic ideas that I really dig. There’s also something special about taking what has been a negative force in my life and using sci-fi/horror/comedy storytelling to transform it into a narrative object that helps me heal.

AP2HYC: How might Canopus compare/contrast with your past work?

Chisholm: It’s my second published work, with Instrumental (Z2, 2017) being my first. Instrumental was released as a single-volume black-and-white graphic novel and Canopus is a full-colour 4-issue series being published by Scout. Instrumental is a slice-of-life world that’s sent reeling from one fantasy element (a magic trumpet of doom) whereas Canopus is pretty full-blown science fiction. Just like with Canopus, Instrumental began with me reflecting on a personal struggle. It’s been really interesting to see how my storytelling has evolved since I drew the bulk of Instrumental in 2013 and Canopus in 2018/2019. 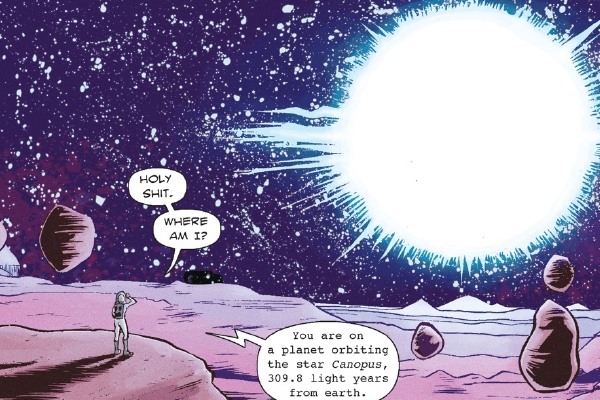 AP2HYC: The visual style balances the aforementioned themes of comedy, horror and sci-fi to great effect. What was your process in drawing this comic?

Chisholm: I’m so glad you dig the visual style. I imagine my process is pretty typical. I start with story, move to script, on to thumbnails, then I pencil, ink, scan, colour, and letter. I have a pretty voracious appetite for variety in my life so, except for story building and scripting, I work in small chunks so that I’m always laying out pages, always penciling some pages, always inking some pages, coloring, lettering, and so on.

One big part of my process pretty early on is establishing what I call “storytelling rules.” In Canopus, I knew I wanted to mainly work within a three-panel-per-tier system to hit story beats (which does occasionally result in the classic 9-panel grid). The three-panel tier allows for timing akin to newspaper comics. The first panel sets it up, the second one digs deeper, and the third one allows for a payoff. This works well for dramatic, comedic, and horrific story beats alike. I also knew that I was going to non-overlapping panels along with white gutters. The passage of time is fairly consistent from panel-to-panel and the colour scheme is somewhat limited.

All of these techniques work well to establish a sense of normal which gets disrupted in the flashback sequences, in which the passage of time is inconsistent, panels overlap in a kaleidoscopic fashion over black gutters, panels repeat in a haphazard manner, and the colour is reduced to a monochromatic palette. The sense of normal established in the story proper allows for the contrasting flashback sequences to have a greater emotional/psychological impact. I love the formal aspect of making comics if you couldn’t tell!

AP2HYC: As if to reflect the psychological flavour of Canopus, its panels and art bear dynamic perspectives throughout for the reader. Did you want to take the reader on a psychological journey with this comic?

Chisholm: Of course! It’s always one of my goals. I want readers to get inside Helen’s head and empathize with her and hopefully see the world differently when they finish the story.

AP2HYC: Colour also feels like a central theme to the comic, would you agree?

Chisholm: ABSOLUTELY. I don’t want to give anything away but YES. When making comics, every single aspect can be used to carry the story forward and reflect/boost the narrative. The way colour factors into the ending is crucial.

AP2HYC: Helen is a complex character, with something of a tragic backstory and encountering some mind-bending revelations throughout the story. Were there any challenges encountered when writing her?

Chisholm: Of course – I knew as a male writer that it would be challenging writing a female protagonist, but at the same time we’ve seen so many instances of a male character leaving home, going into space, leaving the tribe to save the village, humanity, the planet, etc. What would it mean for a woman to take on this type of role?

We all rightfully demand fully-realized female characters, and certain character motivations can, unfortunately, signal lazy tropes or one-dimensional writing. That said, Helen Sterling is a complex character and her relationship to the idea of motherhood is one of many facets and motivators that inform her sense of self. It was such an authentic part of her character that, frankly, it would have been dishonest for me to avoid it. It felt like a risk worth taking. 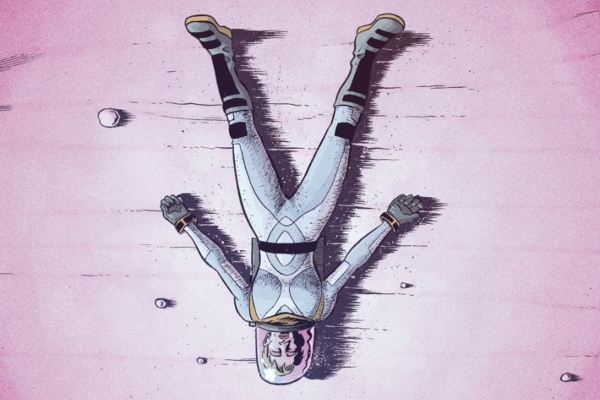 I felt a responsibility to bring as much authenticity and honesty to Helen’s character as possible. I didn’t want her to be this perfect, idealized woman but I also didn’t want her to be a smoking, drinking, cussing, fighting, violent anti-hero because we’ve seen that before – taking behavior typically associated with toxic masculinity and putting them in a female character felt lazy in this case. I wanted her to fully inhabit her unique individual flaws, and follow her story as she works through all of them collectively.

It’s a tough needle to thread, especially when you’re writing for an identity you don’t represent, so I turned to a number of female de-facto editors or sensitivity readers who offered their points of view through the entire process of making the book. My wife Elise is my most valued collaborator. Every step of the way she kept me honest regarding Helen’s character – to make sure she was never acting in service of plot but rather with emotional honesty in service of her personhood. Without Elise, this project would not have happened.

AP2HYC: How did Scout Comics come into the picture?

Chisholm: I was in the process of pitching the book to a few publishers and my friend Walter Ostlie suggested I pitch it to Scout. They were onboard pretty quickly! I’m super grateful!

AP2HYC: What might the overall message of Canopus be?

Chisholm: My favorite aspect of the ending to Canopus is that it’s open-ended enough to be interpreted in a few different ways. Different elements of her story will resonate more with certain readers and that will change the meaning of it for them. I’d hate to come down on it in a definitive way and squash that aspect of the story. I’d love to know what people think of the ending – hit me up in May and let me know what you think!

AP2HYC: Do you have any future projects you’re working on?

Chisholm: AHH dude yes. I’m 82 pages into writing and drawing a big graphic novel project that’s slated for a 2020 release but hasn’t been announced yet, so unfortunately I can’t let the cat out of the bag! This one is an absolute dream project and I am so excited for you to hear about it!

Also, before I did Canopus I drew a three-issue series written by my good friend Milton Lawson entitled Thompson Heller: Detective Interstellar, and it’s scheduled to be released by the cool cats at Source Point Press starting in September. This book was like a perfect training ground in preparing me/giving me the courage necessary to make Canopus and it’s a tremendously fun, pulpy read – each issue is a standalone story but they all tie together in a very clever way. Keep an eye out!

Canopus‘ first issue was released yesterday, with the remaining three issues to follow each month afterwards. You can discover more about the comic from Dave’s website and PreviewsWorld and Scout Comics. Will you be venturing into the unknown alongside Helen? Let us know in the comments section below or send us a Tweet!