Excluding front and back covers, the first two issues of Rosie Packwood‘s bright, introspective sci-fi adventure comic Blinker clock in at just 24 pages of story. That’s about the same length as your average single issue comic book. However, across these 24 pages, Packwood folds in a vast variety of emotions – anger, desperation, sadness, joy and hope, whilst lending each issue its own distinct vibe. This is all evidence of Packwood’s talents as a sequential storyteller, as Blinker‘s spirited vibe gives the comic a natural flair.

Blinker is a comic driven by the feelings of its characters. The comic charts the runaway journey of human boy Merrick, who’s daring escape from a shady and gargantuan base in the depths of space is met with danger at every turn. Helped by his boisterously positive A.I. companion Trixie, issue #1 follows their shared efforts of escape, whilst #2 sees the pair attempt to start a new life on the culturally diverse space port Kardullah. There’s a delightful juxtaposition at work here, as the otherwise upbeat nature of Blinker is offset by a dark mystery for Merrick that brews beneath the humourous atmosphere. Issue #1 suggests that Merrick is less of a human and more of a biological experiment and that his escape hasn’t gone unnoticed by those who kept him hostage. A simple yet effective narrative trick in keeping the reader coming back for more. 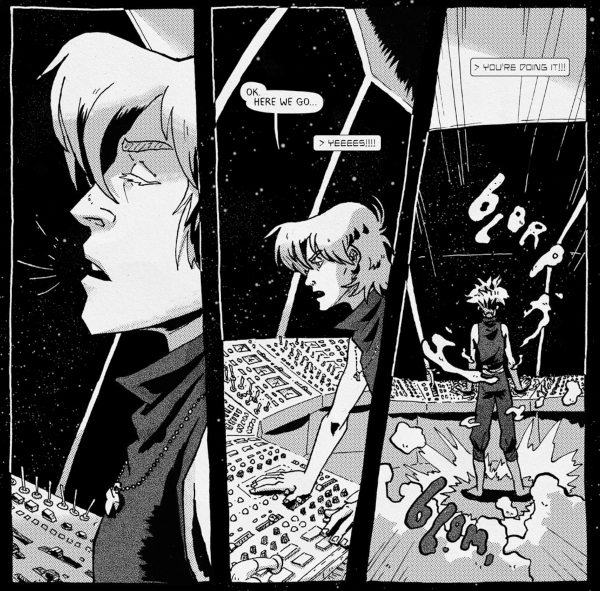 What distinguishes these two issues is the focus given to this intriguing backstory. Issue #1 feels like the stronger of the two issues, whilst issue #2 deviates from expanding on backstory or story-arcs in favour of exploring Merrick and Trixie’s shenanigans in finding work at a local theatrical company on Kardullah. #2 is most definitely the more light-hearted of the two, resulting in the clash of the two issues being somewhat jarring. Issue #2’s lighter atmosphere feels like an anti-climax after the rush of issue #1 as Merrick and Trixie’s journey feels like it fails to advance further, though its saved by the continued charm of the character interactions and Packwood’s gorgeous line art. 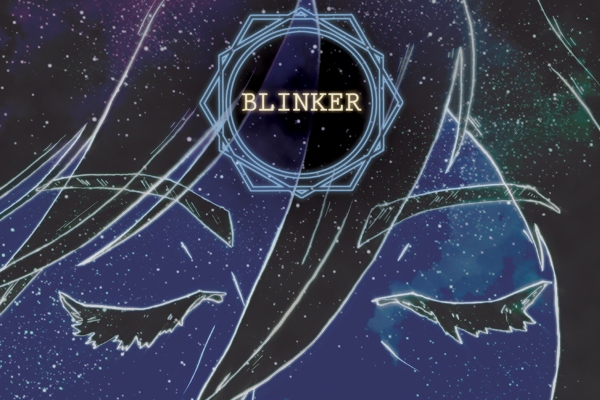 Indeed, what gives Blinker its engaging voice is Packwood’s vigourous sense of detail. Her illustrations have a ragged yet cinematic depth to them, giving the offbeat charm of Blinker an enjoyable edge, aided by faux-newsprint and monochrome production values. The real joy though is her depiction of Merrick. Throughout both issues, she draws this plucky, nervous, not-entirely-human person with a palpable urgency. Visually, Merrick is a masterclass of body movement and expression as an extension of his emotions. His body language effortlessly communicates whatever emotion it needs to. The restless energy in Packwood’s art makes Blinker a comic that’s difficult to turn away from.

Drawn with a homegrown, zine-esque attitude, Blinker swoons you with its nimble, inviting charm. A firmer grip on the comic’s overall narrative styles from issue to issue would make it a stronger read, though future issues may well contextualise the thematic gap between issue #1 and issue #2. I’m keen to see where issue #3 may take us; perhaps that’s the biggest compliment one can pay Blinker, it hooks you in and makes you want to see more of these friendly, empathetic characters. The world is always in desperate need for more positive, action-adventure sci-fi. Blinker is proving to be just that.

You can discover more about Blinker from Packwood’s online store. Are you enjoying the comic already? Let us know in the comments section below or send us a Tweet!