Home » Neon Wasteland Takes Comic Books to the Next Level! 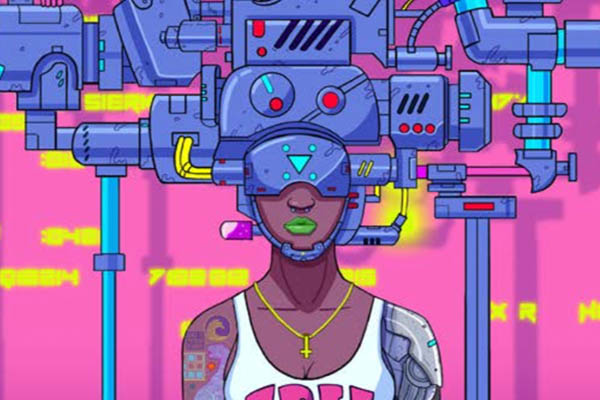 There’s no denying that the rise of AR and VR technology has, for better or worse, created immersive experiences throughout all entertainment platforms. Neon Wasteland by Rob Shield aims to push the boundaries of technology by utilizing AR to create immersive, animated panels to tell its cyberpunk tale.

Taking place in a world where humans have become integrated so much with technology that they are now comprised of robotic parts, Rabbit and her friends enter a Death Race that has a heavy Mad Max: Fury Road vibe. Of course, things are bound to go awry with a title such as that. At the same time, a woman trapped in a case is hearing voices that prompt her to escape. But escaping means being hunted by everyone and anyone who is looking to make money.

In addition to the Mad Max: Fury Road homage, this comic pays tribute to anything and everything cyberpunk. The opening panels that feature the cyber woman attempting her escape is heavily reminiscent of Elfen Lied. The world surrounding these characters feels like a mix of Ghost in the Shell and Akira.  And, of course, given the references to Ghost in the Shell, there’s a heavy homage to The Matrix as well.

The artwork is crisp with colouring that matches the tone of the city life in this world and that of the outskirts. Character designs are unique and vibrant though there are a couple of instances where facial expressions feel stinted. There’s a lack of emotion emitting from characters at times, especially during crucial plot points which can be jarring.

But of course, we can’t ignore what makes this comic truly unique. This comic comes with an app that is free to download. Simply using your camera in front of each comic page with breathe life into each panel: literally. Each panel is animated under the app, bringing an extra pizazz and sense of movement, especially during the more action oriented scenes. And, of course, if you’re like me and aren’t a huge fan of apps in general, you can always enjoy the comic in its standard form without missing much. The app simply provides a nice extra bonus to readers.

If you’re into anything and everything cyberpunk and want to experience a comic in a new, technology savvy way, then Neon Wasteland is the comic for you!

You can order your copy of Neon Wasteland #1 through their Kickstarter and discover more about the comic via its website! Have you had a chance to read this cyberpunk story? Let us know in the comments below or on our Twitter!