Home » TEST Starts with a Strong Premise, but Quickly Devolves 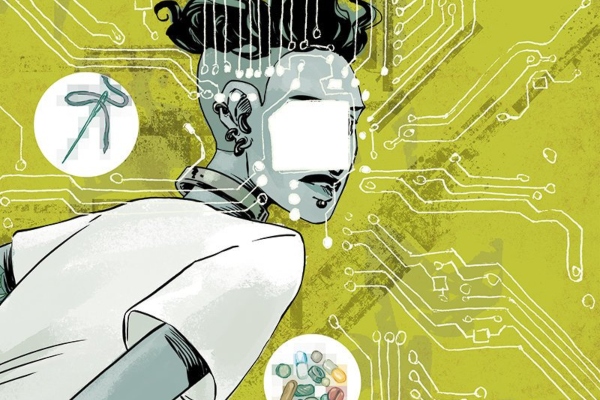 TEST by writer Christopher Sebala, artist Jen Hickman, colourist Harry Saxon, and letterer Hassan Otsmane-Elhaou is a cerebral sci-fi series from Vault Comics. The story focuses on Aleph Null, a guinea pig for a big corporation for unknown experiments. They go on the run to find the mysterious Laureltown and figure out how to fix themselves. A warning for self-harm, addiction, and blood would be a good thing to have for this story.

The opening issue gives us this interesting and premise. I love stories about someone on the run from the BIG BUSINESS and finds themselves getting involved with something bigger. I feel like there was a great set-up. The themes are relevant to modern life (i.e. dependency on technology, searching for a higher purpose in life and so forth). Issue #2 starts off strong as well, introducing the resistance type characters, but then that was when it showed signs of weakness in its story.

Issue #3 is where for me the story started to really devolve into something very confusing that I didn’t follow well. I first thought Laureltown was going to be some sort of Stepford Wives-esque thing just with technology. It was not it, as they introduced other plot threads that remained unfulfilled. I believe this was supposed to be akin the story to the Matrix movies, but done in a very confusing way. Issue #4 went completely off the rails with the revelation about Laureltown that bordered on very disturbing and creepy. Issue #5 concludes the series, and I’m still not sure what happened. 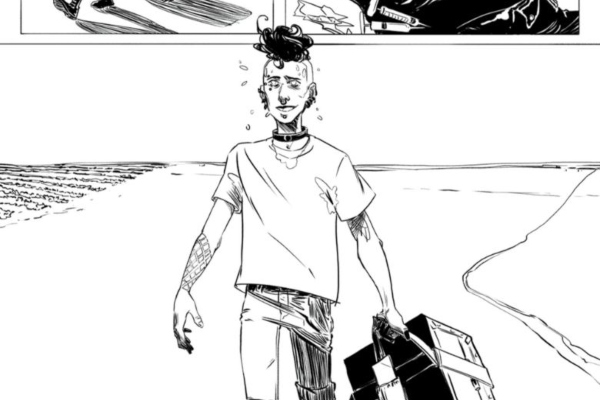 The art by Jen Hickman is very well done. It’s very realistic. The faces of the characters are depicted very stoically without much expression, which I felt fit with the story. I just wish that the artwork helped move the story along better. There was too much narration for me to focus more on the art, which is a shame.  The coloring done by Harry Saxon is superb. The dark colors fit for the tone of the overall story. Hassan Otsmane-Elhaou‘s letterting is really nice as well, clear and precise.

I started out liking Aleph Null’s concept. I like also that the character is non-binary (or a character with no known gender). By the time I got to Issue #2, Aleph was rather unlikable to me. Other people may be perfectly happy with the character, but I just don’t like the character past Issue #1. My major thing was that the character of Aleph clearly hated themself, and had some sort of mental illness like depression or bipolar disorder. It could have been done so much better. Instead all Aleph did was complain and complain some more, and it felt like they had no agency whatsoever by the end of the comic. The character arc of Aleph had so much potential, I feel like it missed a few beats.

The remaining characters were unmemorable. Mary was supposed to be some sort of associate to Aleph. I don’t know who Mary actually was, because it was revealed that most of the comic it was actually Laureltown. Laurel(town) was creepy and unsympathetic. I can’t go into too much detail because of spoilers. The various other characters were generic sci-fi stock characters (i.e. The Repo Men, the Town Resistance, the Town Leadership, and the Underground).

Overall, TEST is a very disjointed comic that had a strong start but a weak finish. It seemed like the story changed issue to issue and it didn’t know what kind of comic it wanted to be.

You can discover more about TEST from Vault Comics. Did you enjoy the comic? Sound off in the comments or send us your thoughts on Facebook or Twitter!