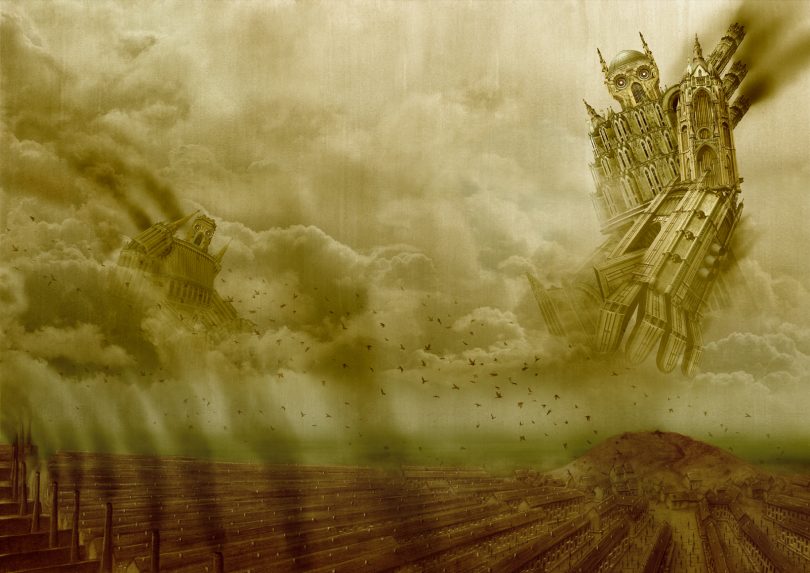 Comics and cartoons have a unique opportunity to render memory through emotive imagery without necessarily embedding that imagery in a familiar reality. The Boy with Nails for Eyes is one such story. It illustrates how effectively and comprehensively feelings that warp our perception of the world – fear, claustrophobia and isolation – can be represented inside chapters of a comic.

I had the opportunity to read the first two chapters of Shaun Gardiner’s The Boy with Nails for Eyes, which is currently crowdfunding on Unbound. While still mysterious, Gardiner’s art and melodic writing show great ambition and potential. This is one for fans of dystopian fiction, as well as anyone who is interested in comics that are more similar to poetry than prose.

The first chapter is devoted to introducing the setting of the tale to come: an uncanny and fogged city with war on the horizon. War, here, is personified by perhaps the story’s most remarkable piece of imagery: towering golems built from complicated combinations of gothic towers. 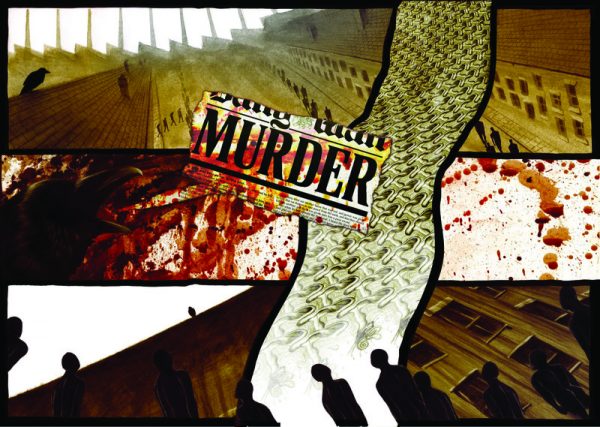 The second chapter introduces the story’s protagonist, Bobby. The scale and sense of mortal dread from the first chapter is pulled back here, as we explore Bobby’s smaller but relatively similar feelings of anxiety. The larger threat portrayed in the first chapter will likely impact the story later on, but this chapter refocuses The Boy with Nails for Eyes to smaller feelings of isolation and a relatable character who, then, I can see us follow onward in the story.

You can read the comic as a metaphor or as a bewildering dystopian fantasy, but the narration will encourage either. In tandem with the dream-like art, the writing in The Boy with Nails for Eyes reads almost like poetry. Gardiner’s writing is as flowing, impressionistic and sometimes as enigmatic as his art. I would say the former functions almost completely in service of the latter.

This narration is occasionally repetitive, but not at all to a detriment to the comic. When the narration lingers on a single repeated line, I was encouraged to remain with some of the chapters’ more complex image, large spreads of collage. This gave prevalence to the story’s recurring motifs, such as the swarms of crows, and had me interrogate details in these collages I might otherwise have overlooked. I absolutely recommend you spend as much time reading the art as you do each caption. 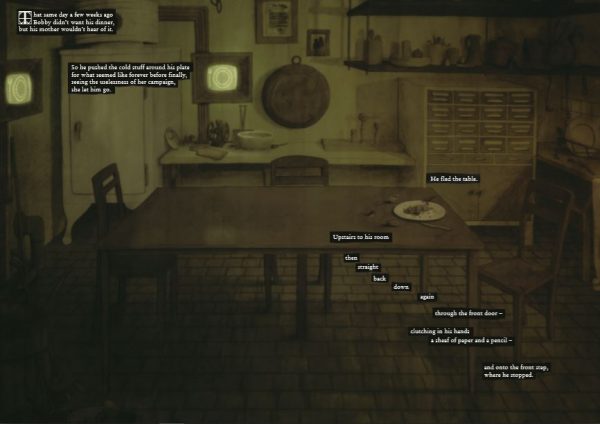 The lettering of these captions also plays into the collage aesthetic. Gardiner mostly keeps to a familiar white typeface in thin black boxes, which is helpfully clear and consistent amidst the sometimes surreal and unruly art. This lettering is almost evocative of an epistolary story: a journal entry, or a historical document of “the day the crow came.” There is an occasional flourish of a drop cap too, the inclusion of which is reminiscent of older and more formal texts. This choice is just another detail that positions the setting of the comic in an eclectic other world, divorced from any familiar timeline.

These first two chapters slowly immersed me in Gardiner’s story, and they do so without copious exposition or dialogue. Instead, the burden is carried by memorable and intriguing impressions of the setting, by its most striking imagery, which is sure to be developed with the following chapters.

You can support this comic and its creator by contributing to its Unbound page! Will you be reading The Boy with Nails for Eyes? Let us know in the comments or send us your thoughts on Twitter!