Alex Automatic has never been an easy comic to read and an even harder comic to review. In past reviews, I’ve spoken of how this subversive spy thriller loves to blur the boundaries between reality and fantasy. However, a more precise summary of the comic’s vibes is how it confuses you as to which reality is which. For the past three issues, government experiment Alex Anderson has been on the run, turned into an insane killing machine and convinced he’s somewhere between Joe 90 and the Six Billion Dollar Man. We last left Alex and his would-be rescuers Wylde and Harry captured by the villanous Prism. Even then however, Alex Automatic‘s feverish deconstruction of reality remained fresh as ever with issue #3’s twist ending that Wylde and Harry’s attempted rescue of Alex was itself a Prism-induced simulation.

With this bumper double issue, Fraser Campbell, James Corcoran, David B. Cooper and newcomer Hassan Otsmane-Elhaou deliver a two-part story that hits the brakes on the comic’s gluttonous breakdown of reality by prizing open Alex’s past in an effort to humanise the character. The end result is an engrossing story that contexualises past events scattered throughout Alex Automatic (it’s also recommended you read the one-off mini comic Perfect 63: An Alex Automatic Adventure, ideally in-between issues #3 and this bumper issue) but also highlights some of the comic’s shortcomings. 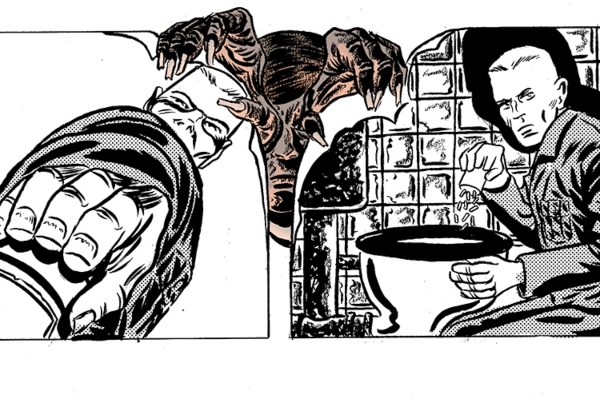 Alex Automatic‘s core themes of personal identity and memory channelled through Cold War-influence media and reflected in the comic continually keeping you guessing as to which reality we’re in has been its backbone since issue #1. Now however, Campbell reigns that focus in, choosing to cement a very genuine reality for the reader’s clarification. Throughout issue #4, we learn how Alex Anderson became Alex Automatic at the hands of Prism, delivered in a stark monochromatic style that wonderfully highlights Corcoran’s striking line art. In issue #5, Alex awakens from his 1960s’ inspired nightmares with his feet more firmly in reality than ever before as his former leader and current enemy Major Johnny Jenkins reveals the reason why he captured Alex – to give him his freedom. A regulator device that can tune out the madness. Alex Automatic can go back to being Alex Anderson.

The unexpected highlight of this story arc is the blossoming of Alex and Johnny’s relationship. Introduced as a tragic one in issue #3, issues #4 and #5 fashions a more complex picture of the pair, as Johnny is confirmed to be the perpetrator behind Alex’s insanity, yet eventually remorseful of his and Prism’s actions (Alex is revealed to be just one of many), leading to a muted yet tense confrontation in issue #5. It’s a delightful twist on the pulpy hero versus villain aesthetic of 1960s media that Alex Automatic takes its primary inspirations from. Their relationship forms the basis for a unique duo of artistic styles at play in both issues. Where issue #4’s aforementioned line art is cold and piercing, the warm, innocent colours Cooper give’s issue #5 reflect the clarity in Alex’s perception of reality and his feelings towards Johnny. Corcoran and Cooper remain steadfast in the visual personality they give to Alex Automatic. The comic’s biting artistic edge looks like it was plucked from some TV21-esque comic that was deemed too weird for public consumption and their work remains a joy to watch in tandem.

Elsewhere in the comic however, the character growth is less evenly-balanced. Wylde and Harry are subjected to a V For Vendetta-esque psychological torture throughout issue #4, but their function within Alex Automatic has arguably been served. The duo performed a metafictional function in giving the reader a tangible grasp on which reality they’re currently in from issue to issue, but with Alex and Johnny’s development, they’ve completed their metafictional mission. It remains intriguing to see how their characters will continue to be handled, but this is Alex’s story, not there’s and they risk becoming dead weight. 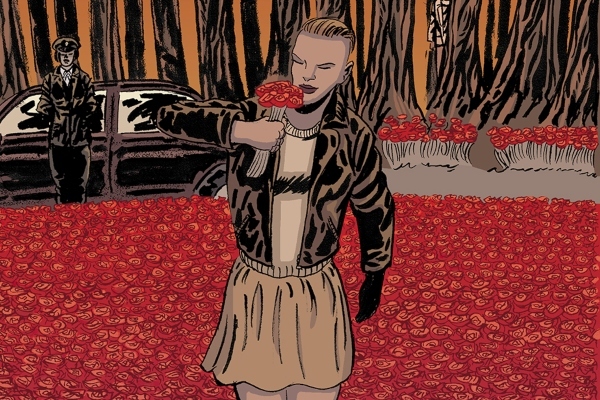 Issue #5 suffers from its own setbacks in the character department. Throughout issue #5, we’re given a rapid reintroduction of the Woodcutter into Alex Automatic, the female assassin from all the way back in issue #1 who issue #5 reveals she aided a post-traumatic Alex in his hour of need. The Woodcutter hasn’t been seen or heard from since issue #1, suggesting that only eagle-eyed readers will fully appreciate her return. Otherwise, it’s another character arc that doesn’t hit with the palpable emotional impact it ought to, all the more a misfire given this double issue’s emphasis on humanising its cast. A character of this importance should have been more of a regular feature, especially since Johnny’s other reason for capturing Alex is to alert him to the fact that one of Prism’s more deadly experiments has gone full rogue and has captured her, setting up the next issue and beyond as Alex prepares to embark on his most dangerous mission yet.

Still, issue #5 does go to some lengths to illustrate the significance of Alex and the Woodcutter’s relationship. Cooper and Corcoran continue to shine in drawing and colouring these tender moments, a welcome inclusion in a vastly anti-tender comic. Flashbacks to scenes of Alex and the Woodcutter are coloured in a darker set of colours than the brighter vibes of the Prism-set scenes with the Major, another slight yet masterful juxtaposition to illustrate the duel moods at work throughout these issues.

Whilst this duo of issues have great creative success in repositioning Alex’s character and establishing a new status quo, it’s not as cohesive as it tries to be via its haphazard treatment of its character. Overall, it doesn’t overtake the mind-twisting horrors of issue #3, but remains a leap forward for the comic whilst maintaining the energy. Small moments between issues #1 to #3 have tried to burst through the madness and paint a convincing portrait of Alex Anderson, the man behind the machinery, but issues #4 and #5 make that scrambling leap to find the human in the machine, even if the end result is the comic’s other players getting left behind.

Alex Automatic #4/#5 launches on Kickstarter tomorrow, you can sign up the campaign now to get notified of the comic’s launch. You can also read issue #1 of Alex Automatic for free from Cabal Comics. Are you a fan of this subversive spy thriller? Let us know in the comments section below or send us a Tweet!