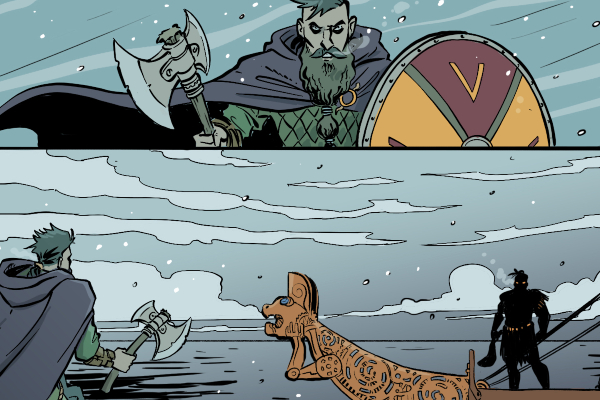 The Ogxcun Myth is written by Joshua Spiller, artwork done by Kishore Mohan, and the lettering by Bolt-01. Originally published in seven installments in the comics anthology Aces Weekly,  The Ogxcun Myth pits two clashing timelines against each other to make a unique, thought-provoking sci-fi, historical tale.

The story opens with automatons/robots gathering prisoners for an unknown reason. Then, there’s switch to a time of the Vikings, or a culture which is extremely close to it. Later we really come to learn it’s a flashback.  The tale of the past details a warrior running from the titular Ogxcun, Fury-like creatures who feed on the guilt of a person. Unlike the Greek Furies or similar creatures from various mythologies, the Ogxcun seem to target anyone who felt guilt even if they didn’t do anything terrible. K’nasq, the narrator, recounts his tale to a mysterious man named Oopaniwatutha. Together, they are attacked by the Ogxcun. (Not gonna lie, these names are wild, and I like them a lot). 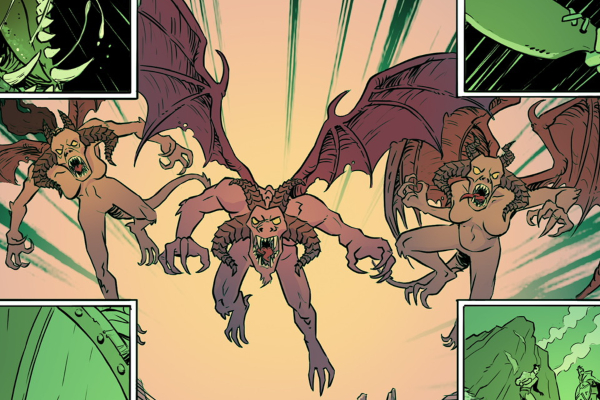 I can’t go into detail about the events, because it’s key to the story’s development and the connected point at the end. The readers are shortly transported back to the vague future and we realize what had happened with the Fury-like creatures connected the two times. Mohan’s art is fabulous. The appropriate colouring at night, versus the brighter colours during the day. It was amazing. I love how the Ogxcun were depicted, not quite the traditional Fury but something else. In addition, I like automatons. They kind of remind me of CP-30 of Star Wars fame. Bolt-01’s lettering is also easy to read in terms of the lettering.

The overall connectivity of the story is great! The piece really pulled together at the end. Be that as it may, I mentioned previously that the story was thought-provoking because the jump between a vaguely sci-fi future and the vaguely 10th century Viking past was a little jarring. I spent most of the story trying to figure out the connection between the two. Also there was a little “tale” within the “past” part of the story that I couldn’t figure out why it was there, except to make up Oopaniwatutha’s mind over something. To be honest, I enjoyed the “past” timeline more. It might be the historian in me, but I really like pieces set in the past.

Overall, The Ogxcun Myth is an interesting story, especially after the last few pages connect everything together, but before that it was a little like, “What was going on?” It was only the last three pages I put everything together. I guess it’s not a bad thing but it was different and different is a good thing. It’s daring go at something unique.

Check out the The Ogxcun Myth here. And let us know what you think!  Did you enjoy the two stories in the two timelines? Did you enjoy the play on mythological creatures. Sound off in the comments or send us your thoughts on Facebook or Twitter!