Home » Maggy Garrison’s Languid Personality Does it No Favours

A great deal of events occur throughout Maggy Garrison. The comic is split into three distinct chapters that read almost like graphic novellas, all coalescing together into a single story. The manner in which Lewis Trondheim and Stephane Oiry execute this comic is its greatest weakness. Maggy Garrison is so laid back, it feels lifeless. This languid, character-driven crime drama has bags of nimble, intricate detail in its story and art, but there’s just so little energy to the proceedings. Whatever flames attempt to flicker into life throughout this comic are quickly extinguished.

Maggy Garrison charts the misadventures of the hard as nails titular character and how her secretarial job for a private investigator sees her tumbling into a grim underworld of violent criminals and evil coppers. The comic almost reads like a loose series of stories as disparate characters and events swirl around Maggy’s life, disgruntling her but rarely sending her into pure madness. Maggy Garrison can’t even muster a suitably dramatic arc for its titular heroine to complement the routine danger she’s dragged into. Threads of urban crime take root throughout Maggy Garrison, thanks to a handsome array of eclectic characters, but they rarely blossom into anything compelling. Maggy herself is presented as a tough, brazen heroine who ultimately just drifts in and out of her own story. 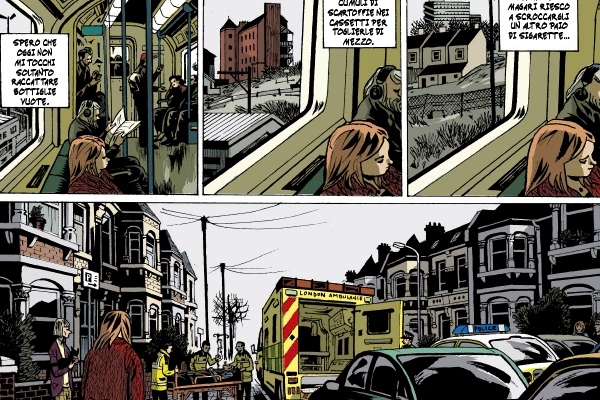 What does catch your eye more is Oiry’s natural line art and earthy colours. The intricate details of the story’s locations, mostly set throughout suburban London, give Maggy Garrison a pristine, cinematic quality. No drawing is out of shape or out of place. Everything is pleasantly neat, matching the straight-forward flow of the story well. Even then, however, Maggy Garrison has to put its foot right in it. Oiry’s art is brought to life in a 12-panel-per-page structure that grates rather too quickly. Whilst the detail in Oiry’s art is more than apparent, the compacted panel work makes it difficult to fully appreciate those details and truly savour them.

Every once in a while, SelfMadeHero delivers a misfire and it’s a shame that Maggy Garrison couldn’t hit the publisher’s usual high standards. There’s nothing explicitly wrong with the comic, the slack-jawed feel is a definite creative choice on Oiry and Trondheim’s part. In a strange way, this gives Maggy Garrison an oddly distinct vibe from cover to cover, it’s just not a vibe that particularly excites you. When you’re writing a crime drama, surely something exciting should stir in you. Devoid of any tangible sense of life, drama or danger in a story that should have all of things going for it and more, Maggy Garrison fails to entice.

You can discover more about Maggy Garrison from SelfMadeHero. Did you find anything to enjoy about this comic? Let us know in the comments section below or send us a Tweet!