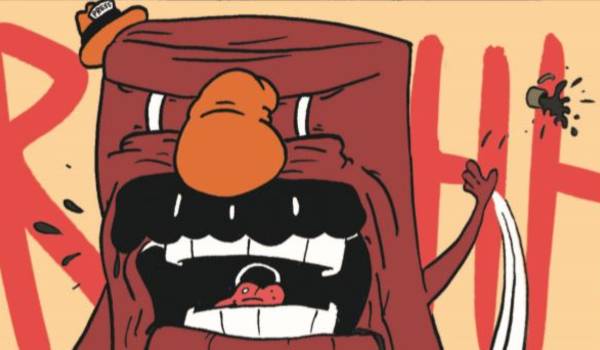 The most effective parodies are also strong examples of the genres that they lampoon. A parody might poke fun at pulpy crime stories in the noir genre, but it goes a long way to also showcase a strong understanding of that genre and why those stories are popular in the first place. Mat Greaves’ Chip McFitz comics show this type of awareness in spades. So many of the comics’ jokes land because Greaves seems to know why we return to that genre in the first place and why those tropes are there.

Chip McFitz’s story so far spans three 28-page installments, available in both print and digital. Each episode is a silly and restless adventure of the titular reporter, Chip McFitz, as he investigates another mystery for the Los Angeles Trombone. The stories showcase a good balance of one-liners and visual humour to last the 28 pages, and anyone with some loose sense of the noir genre will get a laugh out of them. 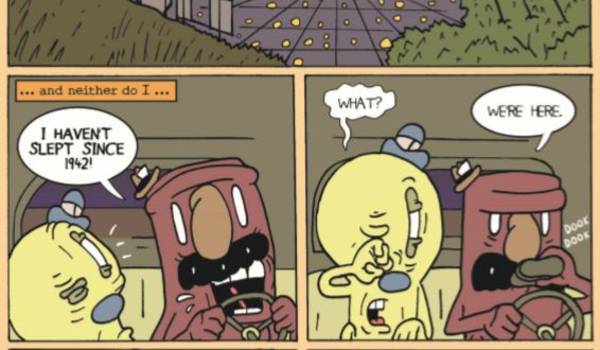 Alongside noir, the comics’ clearest influence are children’s books such as Roger Hargreaves’ Mr Men and their ilk. This strange inspiration is clear in the basic design of all the comics’ characters, bold and bright shapes with stubby arms and legs, but also with how each of those characters embody a single strong character trait. They’re cartoons, in both senses of the word. In that way, they are not a world away from characters in your stock noir movie. This is why the marriage of the two styles is effective: the similarity’s already there. Because every character (the nosey reporter, the irritable editor, the stuffy detectives and the aloof P.I.) conforms ridiculously to the expectations set by genre, the Chip McFitz stories are immediately accessible and funny. That’s helpful, as it means each issue can stand independently. This is of course why classic noir stories use these archetypes, so their characters are instantly familiar and the audience can hit the ground running; Chip McFitz, however, chases these familiar archetypes to the nth degree and then to the most ridiculous punchline.

Despite all this, the comics nevertheless contain strong mysteries and twists… in the background. They would be satisfying plots in any standard fare of the noir genre. However, these plots are always in service of the butt-end of the comics’ joke: any worthwhile twist or revelation is sarcastically disregarded to demonstrate Chip’s ignorance, as it should. The stories go on tangents instead, subject to Chip and his curious and hyperactive nature.

These tangents actually provide some of the most experimental art in each story, such as one sequence where Chip, a manic coffee-addict, loses his lucidity as he struggles to get his next fix. Outside these imaginative sequences, the city is still well-drawn both literally and figuratively. Backgrounds are lush, sordid and dirty. They, small details like shadows, and experimental perspectives on the characters reveal new sides to the comic’s cartoon world. It is a subtle but valuable facet of each story, as it makes the comic itself feel indecent: exposing some vice and a bit of muck behind McFitz’s cartoon Los Angeles.

You can purchase your copy of Chip McFitz here! If you’ve had a chance to read this hilarious comic, be sure to let us know in the comments section below or on Twitter!