All good things come to a maniacal end with #10 of Comichaus. As the anthology stretches into double figures, it closes the book on functioning as a serialised production and from #11 onwards focuses on one-shots. This isn’t an entirely jilting move, since one-shots have populated Comichaus since #1. But still, the conclusion of current ongoing strips Homeopathos, Mandy the Monster Hunter: The Battle of Monster Rock and Cold marks the end of a thoroughly enjoyable first era for Comichaus.

Tone-wise, Comichaus #10 flirts wildly from the positive to the negative. Homeopathos and Mandy the Monster Hunter are blessed with happy conclusions to their story-arcs, but the remainder of the comic’s strips, Splendid Grins, Cold and the standalone juggernaut The Lost Legionnaire are far more downbeat. Comichaus‘ reinvention doesn’t scupper the flow of the trio of ongoing strips, allowing each to reach a natural conclusion. Well, nearly all of them.

The feverish nightmares of the Madius Comics-produced comedy/horror Homepathos reach an emotionally robust conclusion and the all-ages monster/action adventures of Hellbound Media’s Mandy the Monster Hunter kicks into an empathetic conclusion as Mandy seeks common ground with the titular monsters. However, the Blue Fox Comics contribution Cold is a different story. The story closes on a cliffhanger twist where a mysterious zombie apocalypse gains context and meaning that feels as though there ought to be more instalments. It makes Cold climax on an oddly unsettling note that leaves the door open for further chapters as much as it does leave the strip on a grim, sombre finale. 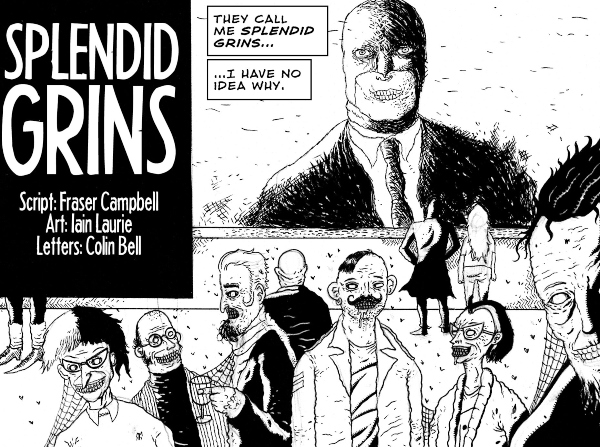 Less of a serial but not quite a strictly standalone strip, a second adventure of Cabal Comics’ delightfully repulsive Splendid Grins. The strip may amount to little more than a monstrous, horror-tinged riffing ion Alex Automatic, but its compact madness feels oddly suited to Comichaus. It’s a comic that’s riddled in chaos, very much style over substence, but blimey – what style. It reads like a tonal prequel to Fraser Campbell and Ian Laurie‘s recent Kickstarter hit House of Sweets, further proof that they make a dynamic duo.

#10 of Comichaus climaxes with Gary Walsh and Rob Jones‘ historical fantasy epic The Lost Legionnaire, a brawny, stomping affair that feels plucked from some lost issue of any number of Fleetway’s classic war comics. Walsh’s expressive art illuminates the adrenaline-fueled nature of the story, which focuses on the trials of a mentally bruised and battered Roman army as they battle against a deadly alien menace. It’s another case of style over substance and the style in question doesn’t reach the dizzying, freakish heights of Splendid Grins, but it succeeds in sending Comichaus‘ first era out in a blaze of glory.

Comichaus #10 definitely has an air of clearing the slate to it. The cohesive ambition that defined past issues is lacking here, most likely due to the metamorphic state of the comic overall. It’s more concerned with ending things rather than beginning them. Even if The Lost Legionnaire suggests that the energy in future Comichaus issues is secured, with its renewed focus on one shots, it will be interesting to see whether or not the engagement that came from the serialised strips will remain intact.

You can discover more about Comichaus‘ latest issue, as well as back issues and more, from the anthology’s website. Have you enjoyed riding the Comichaus wave with us so far? Let us know in the comments section below or send us a Tweet!