Home » The Planet or The People: No One’s Rose Asks Which You’d Save First 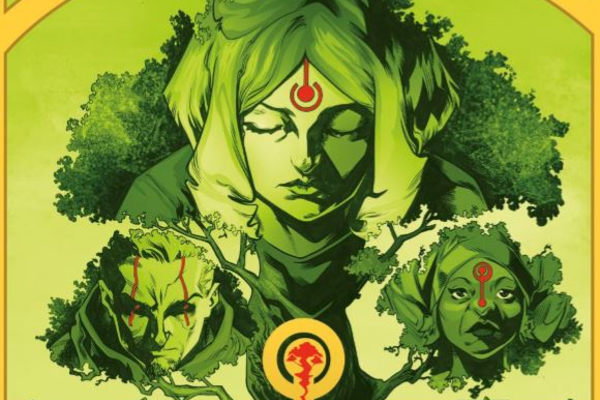 With everyone stuck indoors, it’s quite an appropriate time for No One’s Rose to debut.

The new series from Vault Comics, about a civilisation isolated from their toxic environment inside a tiered dome biosphere, adopts the vibrant, fundamental colours of nature. Full of glowing primary colours and so many lush greens, coloured by Raul Angulo, the first issue is a good respite by simply evoking the feeling of ‘outside’. Indeed, the magic in the sci-fi of No One’s Rose is the outside: nature, plants, the world before and after us. How plants can be exploited and our responsibility for them both seem to be clear subjects for the stories ahead.

Despite this, No One’s Rose is not primarily a didactic story. Its premise appears to have some clear politics, for sure: while many of contemporary post-apocalyptic stories may eschew how they got there, climate change is explicitly the disaster that ruined this world. The pursuit of restoring the earth is immediately revealed to be this society’s greatest priority – the highest governing body of the biome setting is the PELU institution (Post-Environmental-Liberation-Union). 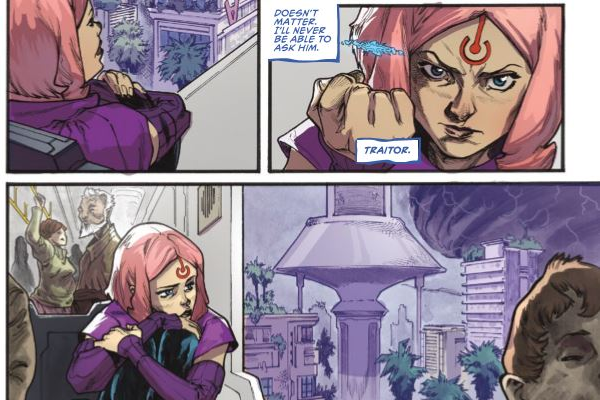 However, only a little further into the first issue, into the civilisation of the dome, and we are presented with the interplay between different types of morality. These are the priorities and the responsibilities of the different classes in the wake of their ecological apocalypse. The series’ leads, Seren and Tenn, are clearly placed in its setting to dramatise this conflict of priorities: between the planet and its people. Though they are brother and sister, and live together, they are largely positioned separately in the dome. Seren is with his boyfriend and other rebels looking to liberate the disenfranchised literally lower classes. Tenn is in her classroom, as one of the most promising young scientists under observation by PELU, who study how to restore the environment outside the dome.

The separation of the siblings is punctuated subtly by Otsmane-Elhaou’s lettering in their inner monologues, which are matched to the environments where we first meet each character. Pay attention to how Tenn’s captions are cold, blue and white, like her lab, whereas Seren’s are a fiery orange and black, like the Brankstokker tree we see him climb early in the story. This first issue is no doubt the closest we will see these two characters for a while, if their respective trajectories now are as clear as they seem.

All this exposition sounds very loaded for a first issue, but it is alacritous and somehow sparse. This is in no small part due to the art of Alberto Alburquerque, which is consistently kinetic and expressive, but also always full. The setting feels populated and lived-in— a dense civilisation rebuilt with wild plant-life. The pacing of the issue always has momentum: rather than just see the layers of the biome, for instance, we watch Seren and Tenn climb to the top layer of the civilisation and then watch that layers’ self-congratulatory parades. This is all benefited further by little details that embellish the larger lore, such as bits of new vernacular slang that writers Zac Thompson and Emily Horn sprinkle throughout, which position characters in different classes. 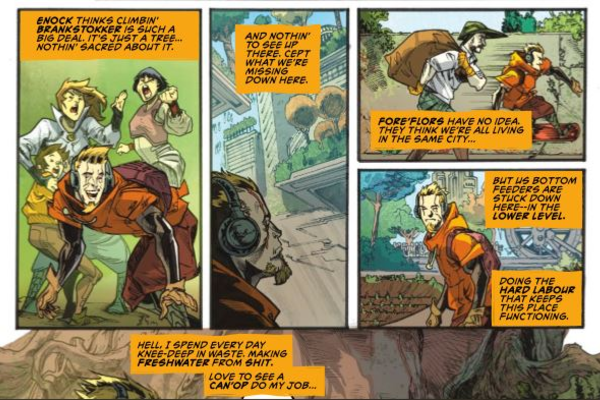 Post-apocalyptic tales about young adults come loaded with a set of expectations, but these expectations give writers Thompson and Horn extra license to hit the ground running, to tackle complex competing sets of morals from the first issue. By this point, readers are conditioned to always be suspicious of the establishment in post-apocalyptic genre stories, but in this context, PELU is an organisation devoted to ecological research and development.

The opposition between Seren’s rebels and this organisation is presented to be mutually exclusive— their intentions cannot overlap. We see Seren use antique headphones and with them, he flippantly excuses his ancestors’ excessive use of plastics. What PELU is doing is, in his view, not important nor a priority. Since PELU is also aligned with the privileged class at the top of the biome, this dichotomy is unavoidable. We are immediately involved in the siblings’ tension.

Is it right to prioritise the planet or its disenfranchised people first? Seren and Tenn are both right and they’re both ambitious, and so it will be exciting to see where this ambition takes them in No One’s Rose next issue.

You can learn more about No One’s Rose here! Have you had a chance to dive into this lovely comic? Let us know in the comment section below or on Twitter!