The current Covid-19 pandemic has resulted in many comic book creators making the most of their talents to fill the large amount of time we suddenly have on our hands. One such creator is Jordan Thomas, writer of the recently concluded Frank At Home On The Farm and the upcoming Mugshots, who is taking his latest work to Kickstarter — Quarantine. No prizes for guessing the thematic inspiration for this one!

Quarantine uses its science fiction premise as a metaphor for the current social climate we’re all experiencing, but also features a veritable swarm of indie/small press artistic talent from the U.K. and beyond, with each internal artist contributing a single page to Thomas’ story. Amongst the 28 artists that make up Quarantine including Gustaffo Vargas (L1MA, MANU), Russell Mark Olsen (Gateway City), Rosie Packwood (Blinker), Andy W. Clift (The Adventures of Captain Cosmic), Rory Donald (Griff Gristle), Andy Bloor (Midnight Man), Donna A Black (The Soul of the Sea) and Martin Simpson (The Needleman).

We caught up with Thomas to discover how much fun it’s been creating a comic that brings together all of the above artists and more!

A Place To Hang Your Cape: It’s easy to see where Quarantine takes its inspiration from! But why choose to make a comic out of the current climate?

Jordan Thomas: The idea to pull together a big group of artists to collaborate together during the lockdown came first. I’d seen amazing talents like Gustaffo, Russell, Iain Laurie and Rosie sending art back and forth. All those ‘suggest 6 fan arts’ doodle challenges going around and this was really just an extension of that. “OK we’re all stuck inside and we have a little more time than usual, lets get something special out of it”. That was the mentality.

However, I wanted to take at least a rough idea for a story to them. So before sending out the message to a handful of these artists that would quickly lead to this huge project I had a little brainstorm about what kind of story it should be. It just felt right that it needed to be linked to what we’re all going through. I’ll admit I had momentary concerns that it could seem a bit crass, but in Spain – where I have been for this whole thing – we’ve been in full lockdown for a fair while with the only outside time being a trip to the shops. So, when trying to come up with a story the only ideas that were coming involved people being trapped inside.

AP2HYC: Quarantine takes the unique format of one artist illustrating one page of the comic, why take this approach?

Thomas: I guess this follows on from the previous question. I didn’t want this to be a huge commitment from people, just something fun that could take our minds off things and bring us together. Also, this approach means I get to work with 28 wonderful artists — a few of who I’ve worked with before, but most of which I’ve just been voyeuristically drooling over their art for years. What an image, ay? So yeah, I guess that’s the selfish part, I have some of the most incredible artists on the planet all working together on my script.

AP2HYC: What sort of style does this give Quarantine? Or rather, can the comic even be summarised in a single style?

Thomas: Well, as part of the project I wanted to get a huge range of styles — like Edward Bentley and Rosie are going to deliver a very different kind of page. This was a big draw of making the book for me. But on top of that I also sat and planned out who would do which page with the specific desire to try not to have too many similar artists back-to-back. I want Rosie and Emma Kubert taking on the crazy violent pages as well as Gustaffo and Clark Bint. The juxtaposition is part of the fun.

AP2HYC: Why take the sci-fi angle as a metaphor for the current pandemic?

Thomas: To be honest, I always find that my best ideas come fairly fully formed and I tend to be able to write them quite quickly. It’s like dominos — each thought I have knocking into the next and it all just making sense to me. So, I didn’t specifically think “hmm… should this be sci-fi or maybe a western” the story came, it was sci-fi and it all just felt like exactly what I wanted to do. Although pulling all these artists back together for a western in the future sounds like fun. 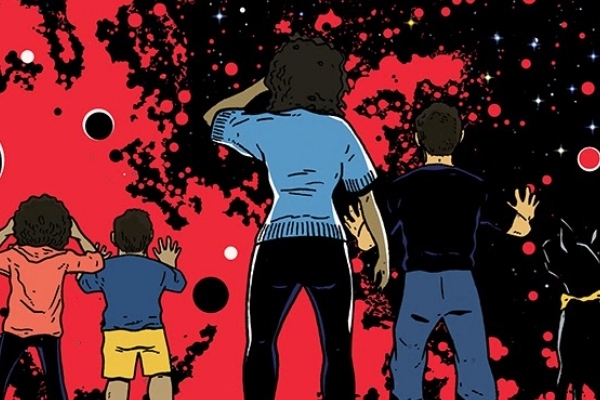 AP2HYC: Quarantine contains an absolute who’s-who of UK indie talent. What’s been the process like of bringing people on board, so far?

Thomas: It’s unreal, right? Not sure how I got them all to agree, but to be honest since getting into the scene over the past couple of years I’ve been blown away by how lovely people are. Everyone just loves comics and wants to help each other out, so it really was just a case of dropping people a message. I had my core group I went to first, as I thought if they came onboard it would definitely happen — people have so much respect for guys like Russell and Gustaffo, so they’d be a draw. From there, the artists I already had suggested some more folks, and I went chasing all the other indie artists I’d wanted to work with and more often than not people said yes. It really is humbling and heart-warming how awesome people are. Even huge names I’ve reached out to took the time to chat with me and offer advice.

It’s also not just the best the UK has to offer. Clara Meath and Emma Kubert are American, Louie Joyce is Australian and then of course we have Darick Robertson drawing the cover, which is incredible. It’s a global piece of art we’re putting together, which is cool in a time when there’s been a lot going on trying to pull everybody apart.

AP2HYC: Has it been a quick process bringing this comic together?

Thomas: Yeah, crazy quick. I mean it was like 7-10 days into the lock down in Spain, I guess just as the UK was following suit, that I sent that message to the first group. The end of March. And now it’s the end of April and we’re launching the campaign and the comic is over halfway finished. But that was the whole idea, can we conceive, produce and fund a whole comic whilst the lockdown is on? Creativity overcoming!

It helps that all the artists onboard are such pros. I set up this Slack group for us all to share stuff and ask questions and it’s been so cool seeing everybody post their work as they go. I think my favourite day so far was going on the Slack to see Gary Erskine chatting process and what pens he uses with the other artists, and Shaky Kane has been on there as well sharing stuff. Just amazing. It’s felt like our own little community, which has meant a lot in this time of self-isolation.

AP2HYC: How might you hope people react to this comic?

Thomas: Well, I hope they like it! The artists have worked so hard at delivering incredible work, so I hope it’s a big success, as they really deserve it. I hope it provides a little fun distraction for people. Something you can come back to and look for all the great little details. Although it’s obviously taken some inspiration from our current situation it isn’t like having to see the news being thrown back at you. The story has taken the aspect of people being trapped together in a small space and that’s really where the similarities end — so, it’s definitely escapism with a little social commentary as opposed to anything that’s going to get you down and make you feel stressed. Forgetting I wrote the story and just focusing on the amazing art on show — personally I think it’s an absolute blast.

You can discover more about Quarantine via its Kickstarter campaign. Will you be backing the comic? Let us know in the comments section below or send us a Tweet!