It might be hard to imagine, but there was a time when Star Wars was not the center of popular culture. Between the original and prequel trilogies, there was a dark period at the end of the 80s with no new Star Wars content. The last piece of media released was the Droids show in 1986. Five years later, Lucasfilm filled the void with a vengeance by launching video games, books, and the comic books series Dark Empire. Star Wars fandom was kept alive through the 90s on the strength of these books, comics, and games, until the eventual release of The Phantom Menace in 1999.

Dark Empire is a milestone simply for being the first of the Dark Horse Star Wars books. Taking place six years after Return of the Jedi, the book opened new worlds and characters, many which would stick around for decades. But, does Dark Empire and its sequel Dark Empire II hold up today? Well, in some ways yes and in some ways definitely not. Scripted by Tom Veitch and illustrated by Cam Kennedy, Dark Empire takes big swings with the story and art. The narrative is broad, with the New Republic smashed and kicked back into a fugitive rebel state, with our heroes on the run. Luke Skywalker falls to the dark side, and things get grim fast. Likewise, Kennedy’s art is brooding, stylish, and gritty. Kennedy paints the galaxy far, far away as shadowy, dilapidated, and moody.

Dark Empire’s biggest narrative claim to fame is bringing back Emperor Palpatine, 28 years before JJ Abrams would do the same in Rise of Skywalker. There are mixed feelings about Rise of Skywalker, but I think Dark Empire’s Emperor holds up well. He starts as the old frail man we know and meme, before transferring his essence into a younger, clone body that duels with Luke Skywalker. Young Palpatine is where the comic really takes off; presenting a timeless villain, rejuvenated in a new dangerous form, he becomes a threatening and an effective villain.

Sadly, Veitch’s interest in dark side baddies doesn’t stop at Palpatine. As the comic continues, there are dark side enemies of all stripes. Dark side adepts, dark side acolytes, dark side beasts, dark side droid starfighters, dark side storms, and dark side stormtroopers. Veitch wears out the phrase “dark side” exhaustively. This is a shame, because his best inventions, the Viper Droids and World Devastators, are the few that aren’t described as “dark side.” Perhaps if he’d focused less on the force, he would have had more interesting ideas. 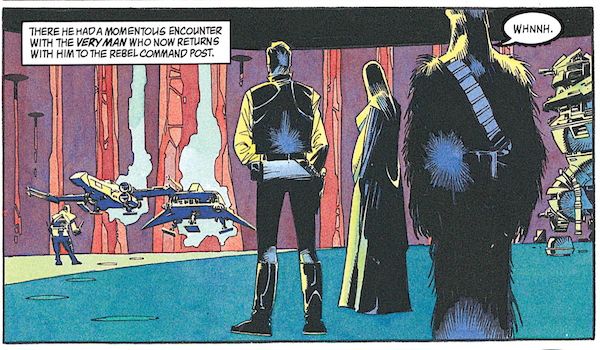 Thankfully, Veitch does not have similar pitfalls with the light side, even though he introduces a litany of new Jedi and Jedi-adjacent characters and concepts. These new characters work better, because he provides explanations and back stories for many of them. Jedi Kam Soulsar, Vima-Da-Boda, Empajaytos Brand, and the Ysanna twins are all distinctly characterized and introduced in interesting, fully explored ways. The dark siders are often just dropped in with no explanation.

The overarching narrative is stronger in Dark Empire, as the rise and fall of clone Palpatine’s empire consists of a variety of victories and defeats, despite Veitch reliance on superweapons and tendency to show entire rebel armies and planets being obliterated. To be fair, Kennedy is very good at drawing armies and planets being annihilated. The World Devastators’ destruction of Mon Calamari features some of Kennedy’s best work, as he gets to play with the fine details of ships and soldiers.

For me, the larger takeaway from Dark Empire and Dark Empire II is that Veitch’s writing created cool stuff for Kennedy to draw. The story is fine, the characters okay, but the writing serves best as an inspiration for the artist. The art is the reason to pick up Dark Empire, because truly Kennedy envisions Star Wars like no one else. Indeed, original Star Wars concept artist Ralph McQuarrie wrote in the forward for Dark Empire II, “The work in the Dark Empire series is very impressive. I look with envy at the crisp, stylized drawings of Cam Kennedy.” Kennedy’s work is brilliant, unique and wholly enough to mark Dark Empire and Dark Empire II as a must-read for Star Wars fans.

Does Dark Empire remain a thrilling entry in the Star Wars spin-off saga for you? Let us know in the comments section or send us a Tweet!