The Rose Society #1 and #2 is a series that focuses on friendship and the pain of growing apart. This series is the fruits of the collaboration between; Eddie Klinker (writer), Daimon Hampton (artist) and Jimmy Greenhalgh (colours and letters). Can I just make a quick shout out to these artists for working together on this project? It’s incredibly hard (but also rewarding) to work collaboratively on an artistic project. The authors plan on realising 5 issues, but in this review I’m going to talk about the 1st and 2nd issues of the comic series.

The Rose Society #1 begins with a funeral, where we first meet Adam. Adam is a regular guy who has just lost one of his childhood best friends, Marcus. Adam and Marcus started growing apart in the last few years; as friends do sometimes. We know that Adam was a drug addict; but he recovered and made positive changes in his life. Adam feels guilty about not keeping in touch with his friend; especially because he and Marcus’ mother where the only two people he had left. Adam collapses in an even worse state of mind when he finds out Marcus’ mother died 24 hours after her son’s funeral.  As a result, Adam relapses and meets up with a drug dealer, who attacks him for no apparent reason; but Marcus appears and saves him. Behind these fake/real deaths and attacks there is a secret, underground group called The Rose Society.

The second issue of The Rose Society Marcus and Adam fight for their lives, while the secret society keeps hunting them down. We find out more about the Rose Society and why they are going after Marcus’ friends and family members. The story has a fast-pace element to it; to the point it seems like we’re watching an action film rather than reading a story on paper. Although the story develops almost frantically, Kinkler manages to build Adam as a layered, complex main character we empathise with. The writer manages to create a believable, strong bond between Marcus and Adam from the get go. All of this happens while Marcus fights the society member, ‘the demons’ in a dynamic, bloody, almost with a Tarantino-inspired style of combat. 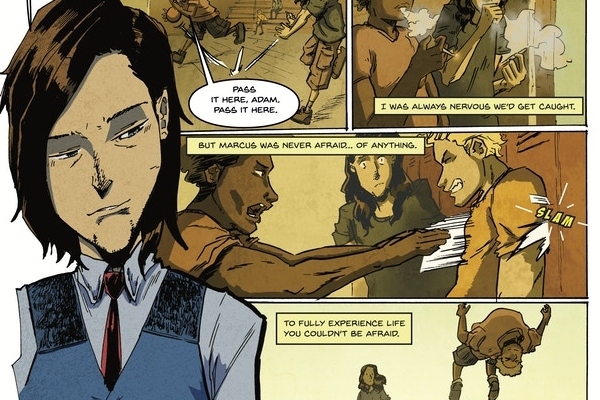 However, there are several moments in the comic where there’s too much exposition of events that should have been addressed at the beginning. I don’t want to give too much of the plot away, but in the second issue Marcus explains why he joined the secret society; it is because of a traumatic event that changed his life. This event hasn’t been shown or even quickly mentioned in the first issue of the book. It should have, because it’s something other characters would have mentioned as it affected other people’s lives too. Marcus also explains how he helped out another family member and protected them from the secret society. Marcus has to openly explain an elaborate plan that should have been already mentioned, shown or hinted at on the first issue of the series.

Of course, it’s not necessary to write an excursus to explain every single thing that happened in the protagonists lives, but it’s a good rule of thumb to make sure to mention important things while establishing the world of the story. This way it makes sense to the audience why an event would influence the protagonists. But these are just minor, technical issues that don’t really affect how engaging the story is, or the audience’s interest for the protagonists.

The artwork seems inspired by the film noir epoch of Hollywood, with its dramatic angles and perspective, mysterious atmosphere, contrasting imagery and the graphic violence. In fact, The Rose Society reminds me a lot of Sin City, which was inspired by films noir genre as well. The bodies’ anatomy, even when there is some purposeful distortion, is very accurate. The characters hands and arms are surprisingly expressive; only a well practiced artist can achieve this level of accuracy with a single, shaky line. The only criticism I have is that the characters’ faces look flat and distant at times. I love the use of strong, bright colours in the comics, butI didn’t find a lot consistency with it throughout the comics. Sometimes they’re powerful, sometimes they are bland and washed out.

In conclusion, I think these first two issues of The Rose Society represent a promising beginning. I would recommend The Rose Society for the adrenaline junkies and thriller fans. I think the artistic collaboration between Klinker, Hampton and Greenhalgh gave its fruits. I’m exited to see what’s going to happen next, especially because the second issue ends with a real cliffhanger!

Have you enjoyed The Rose Society? What do you think? Let us know on Facebook or Twitter! The Kickstarter campaign for issue #2 begins this Friday!