A kind of comic epic in its own right, She Said Destroy is a five-chapter masterpiece filled with alluring symbolism in art and dialogue. Seemingly inspired by Edmund Spenser’s The Faerie Queene, each chapter is a curious piece of poetry contributing to an overarching story. Joe Corallo writes intrinsic dialogue alongside brilliant world-building whilst artist Liana Kangas, colorist Rebecca Nalty and letterer Melanie Ujimori don’t falter in keeping up with such layered storytelling.

She Said Destroy tells the conflict between two sisters, Brigid and Morrigan. Brigid is a self-proclaimed saint, and a god of the sun, while Morrigan is the queen of fairies with few believers left to keep her fighting and protecting. As the long-time-coming confrontation between the two sisters arises, their followers must prepare for an all-out war between light soldiers and fairies.

There are whimsical notes of religion, and the world is very much a Themyscira-like paradise. The comic itself is a beautiful blend of art, color and story, making it a breathless and charming read. With engaging characters and an interesting set of action sequences, it is easy to be taken into the comic’s thrilling world of cosmic fairies, complicated family reunions and pages and pages of aesthetically pleasing art. But what really makes this particular story so undeniably fascinating is its slight parallelism to certain aspects of Spenser’s The Faerie Queene. From Arthurian names and figures such as ‘Morrigan’ (seemingly derived from ‘Morgan la Fay’ meaning, Morgan the Queen of Fairies) and ‘Gareth’, to similar tropes of visions and magic, and the use of knight imagery.

Furthermore, the symbolism intricately embedded into the dialogue and visually presented by the breathtaking art thoroughly exposes a well-made and well-cared for story. Among such symbolism include the contrast between sword and magic, fairies and the light, Morrigan as the crow, and Vrixton and Winona acting as hosts for Brigid and Morrigan. I particularly enjoyed the saint symbolism carried by Brigid. At the end, Brigid canonizes herself into the position of God after the death of Morrigan, a notion that was carried over from a previous conversation she had with her sister. Having transcended from ‘saint’ to ‘god’, Brigid proves that she has surpassed the need to rely on people’s beliefs as she now has the power. 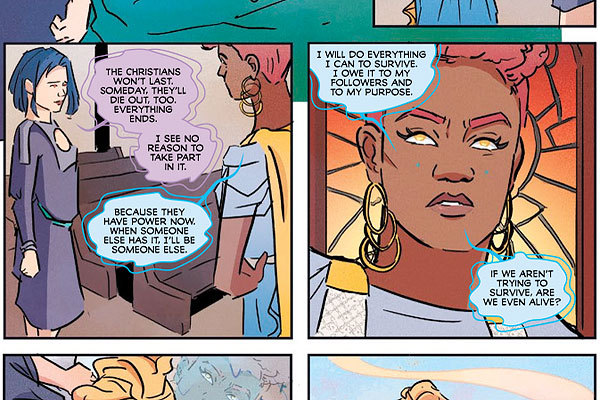 The colorful characters are each crafted with their own story to tell, from Brigid and Morrigan and their complex relationship with the likes of Vrixton and Winona, to Gareth and Raul and what their presence add to the overall course of the plot. The art also gives every individual character their own distinct feature, whether it’s the color of their hair, the way they pose and carry themselves, to the flurry of the magic coming out of their hands. The main set of characters presented to us do not feel one-dimensional and instead, help build the world and the story surrounding the conflict between the two sisters. Brigid and Morrigan in particular are very well-designed characters, the contrast in their color palette and stance I find quite similar to Raven and Starfire from DC’s Teen Titans. 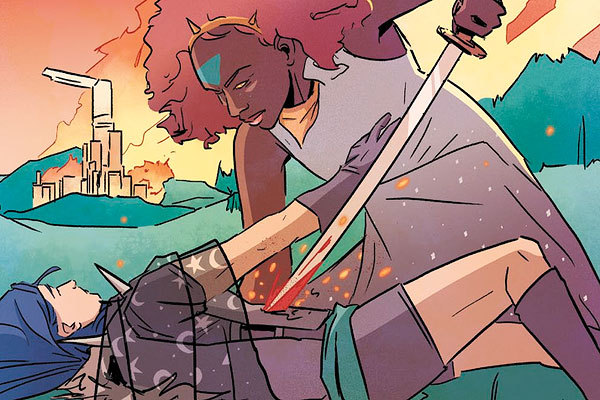 Although some panel arrangements are quite vague and confusing, and clarity within these panels would be beneficial, this can easily be ignored by the beautiful trappings of art and colour. The palette shifts from the flickering haze of cosmic hues to the rainbow mist of the sky, with color symbolism that smoothly transitions from page to page. The way nature and magic is depicted is relaxing and evokes a sense of serenity from the readers. The only problem would be the lackluster final fight scene between Brigid and Morrigan which left me quite disappointed. It lacked urgency and brilliance the other sequences had in the earlier pages and chapters.

Overall, She Said Destroy is a very enjoyable read. It stimulates interest with references to The Faerie Queene, but cleverly catches readers off-guard with its own authentic story worth telling. And sure, there are moments of confusion in certain panels, anticlimactic fight sequences in the form of the final bout between Brigid and Morrigan. But all that can be easily forgiven by how Corallo pulls all the complexities of the story, the world, and the characters together, at the seams.

Curious to see how exactly She Said Destroy channels The Faerie Queene? Then discover more from Vault Comics and send us a tweet on Twitter about what you think!