David Bowie‘s never-ending stance as a colossal figure in pop culture has resulted in countless biographies being produced over the years. Curiously, despite how well-suited Bowie’s musical career is to a graphic novel adaptation, there have been relatively few attempts to document Bowie’s musical personas in sequential form. The delightful Haddon Hall, written and drawn by Nejib and published through SelfMadeHero, charts the singer’s construction of the Ziggy Stardust persona, whilst Bluewater Productions’ Fame: David Bowie and Tribute: David Bowie attempted to capture a complete picture of the singer. Joining their ranks is BOWIE: Stardust, Rayguns & Moonage Daydreams, a graphic novel biography spanning Bowie’s glam rock career between the Hunky Dory and Aladdin Sane albums. Despite its enthusiasm for its subject, the graphic novel has a curious lack of warmth or soul.

Writer Steve Horton, artist Michael Allred and colourist Laura Allred use the comic book medium to exploit an era of Bowie’s career that’s perfectly suited to being a comic book itself. As the title suggests, this graphic novel focuses fairly sharply on the creation, the impact and the immediate aftermath of The Rise and Fall of Ziggy Stardust and the Spiders from Mars. The list of sources included in the comic emphasize the research Horton has conducted. Large and small moments in Bowie’s life during this period are documented, from the world’s first glam rock gig via The Hype to Bowie’s fear of flying, there’s few stones that are left unturned.

Michael’s slick, faithful line art veers on being too faithful, in places full-on replicating such iconic moments as Bowie playing Mick Ronson‘s guitar with his teeth during a live show on the 1972 Ziggy Stardust tour, the Aladdin Sane album cover photoshoot and all of Bowie’s albums up until Diamond Dogs. Such powerful moments scattered throughout Bowie’s life aren’t given the visual personality they deserve. It’s as if they, and much of the depictions of Bowie, the Spiders and all the other players who came and went during this time, are treated with such reverence that anything beyond note-for-note copying simply won’t stand. In doing so, there’s a distinct lack of individualism on the comic’s part. More successful is Laura’s vibrant colouring, which gives weight and depth to Michael’s line art and adds a hearty, glammed-up tone to the comic. 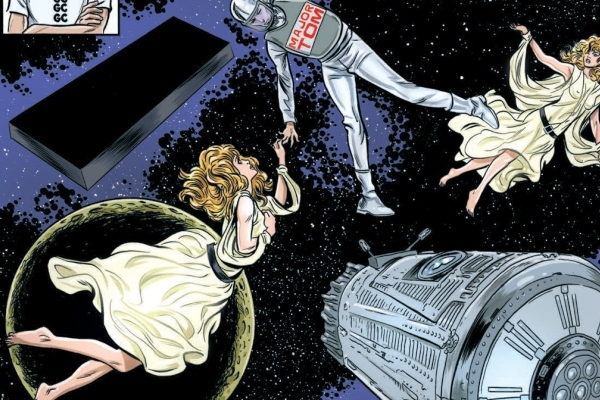 The problem BOWIE: Stardust, Rayguns & Moonage Daydreams faces is that it tells the era of David Bowie that everyone has told before, and so is tasked with trying to bring a fresh perspective. The best moments of the comic come when it pauses telling Bowie’s story entirely, and instead translates lyrics from key songs of this era into psychedelic creations that pop and fizzle in colour and shape. Life On Mars, The Man Who Sold The World and Five Years are brought to life in invigorating splash pages where Michael’s line art is given more creative freedom and Laura’s colours continue to dazzle. It’s a shame that the whole comic isn’t produced in this way, as doing so would have given it a stronger sense of character and embraced the sci-fi quality of Bowie’s output during this period.

For all of the comic’s rich history, some key moments are still abandoned. Bowie and the Spiders produced numerous other tracks during the Ziggy Stardust era that went on to gain as much notoriety as the album cuts themselves. The non-album hit single John, I’m Only Dancing, produced in-between the two albums, isn’t mentioned at all, neither is the classic album outtake Velvet Goldmine. An overly nit-picky observation, perhaps, but the depths in which Bowie: Rayguns, Stardust & Moonage Daydreams goes to capture as much of Bowie’s career at this point makes it an oddity that these songs should be left abandoned.

BOWIE: Rayguns, Stardust & Moonage Daydreams is a complicated affair. Some of what it does is really good, some not so good and some of it could have been a lot better. Those looking for a slick, uncomplicated encapsulation of David Bowie’s glam rock heyday will find a lot to enjoy here, but the more determined Bowie fan will likely come away from this comic unfulfilled.

You can discover more about BOWIE: Rayguns, Stardust & Moonage Daydreams from Insight Comics. Have you already read the comic? What did you make of it? Let us know in the comments section or send us a Tweet!