Writer Tom Abbosh is crafting a sci-fi cosmic horror comic in a unique fashion. Howl is having a variety of artists illustrate the comic’s ten chapters, with its current Kickstarter campaign raising funds for its second instalment. Howl‘s story itself is rooted in a rather cerebral approach to horror with its underlying fear of the unknown. We caught up with Tom to discover more about Howl!

A Place To Hang Your Cape: What can you tell us about the genesis and meaning behind Howl?

Tom Abbosh: The story of Howl is about how we all make our own myths for ourselves to trick us into clinging onto some meaning, and it’s about how important it is to respect one another’s personal myths. That’s what a healthy society should be, I think. So in this story we have a priest, a scientist and a warrior who all operate with different beliefs trying to uncover an ancient myth in a dangerous setting – it quickly tears them apart.

AP2HYC: Why make a comic with a different artist on each page?

Abbosh: I’ve always been on the fringe of the community, and I’ve always relished collaboration on the other side of my career – filmmaking – so I knew how to celebrate collective creativity. I thought that this format would be a great way of introducing myself to new artists, spreading the potential opportunity that Howl could offer wider, and I thought it would be a great way to play with the medium which lends itself so well to experimental approaches.

AP2HYC: What extra visual edge does this process give Howl?

Abbosh: The artists are given one brief – whatever their style, the characters must be recognisable to therefore weave a convincing continuity. Where the first chapter is a classic comic style penned by the incredible Adam Kindred, future chapters will play with breaking apart panels, more colour, greater or lesser depth, anything! We’ll watch the same story unfold through a different lens with each new chapter. 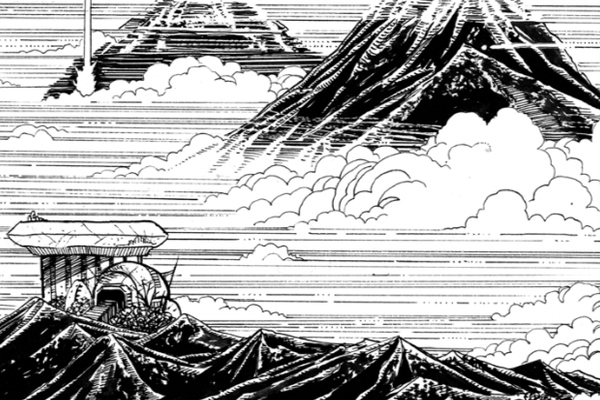 AP2HYC: What style is second artist Caleb Lindley bringing to the book?

Abbosh: I’m really excited about Caleb’s contribution. Initially, I asked him when I saw his work in Sliced Quarterly which was similar to Adam’s. But when he showed me his new style he was developing I saw that Howl would be a great way for him to develop his skills further and to take the book in a new direction. I like to describe his digital style as neon-noir, but he introduced it to me as the painterly styles of 2000AD and Future Shocks. Check out his website – they’re glitteringly visceral: caleb-lindley.squarespace.com

AP2HYC: Who may be the other artists you’ve got lined up?

Abbosh: I have been humbled by how many people are interested in working on Howl. But that’s probably because I’m making sure we pay them a decent wage more than them falling in love with the project – haha! Dr Christopher Dean (@PrincessQuatris) is a paleontologist and sharp illustrator that I’ve worked with before, so I have him tapped. The fantastic Olivia Sullivan (@zeb_ko) has also expressed her interest. To name a few. It’s going to be really hard to choose!

AP2HYC: Will there be a Kickstarter campaign for each chapter?

Abbosh: My priority is ensuring this project pays its illustrators a decent fee, so as long as Kickstarter remains the best way to accrue that budget then, yes, there will be a campaign for each chapter. This certainly chimes with the community vibe – but it is a lot of work! So I am just so grateful to all our wonderful backers that have decided to support us and the comics community collective. Thank you!

You can discover more about Howl through its Kickstarter campaign. Will you be backing the comic? Let us know in the comments section below or send us a Tweet!