Home » Rampaging Gunfire & the Power of Lighting: In Conversation with Fell Hound, Creator of Commander Rao

Writer/artist Fell Hound‘s dystopian, romantic one-shot Do You Believe In An Afterlife? marks just the beginning of further action-heavy comics with a feminist twist. The forthcoming Commander Rao, her third publication, promises to be a different beast from her past work. The mixture of prose and sequential formats that makes Do You Believe In An Afterlife? an inventive, multi-media comic makes her a talent to watch, with the upcoming darker vibes of Commander Rao cementing her reputation further. Commander Rao will launch on Kickstarter on the 29th of July. We caught up with Fell Hound to discover more about her latest comic!

A Place To Hang Your Cape: What can fans expect from Commander Rao?

To be fair, my goal with Commander Rao was to make a balls to the wall, crazy action comic. So its very action heavy and quite violent. Lots of blood. Lots of gunfire. Lots of zipping around on grappling hooks. It’s a very fast-paced comic.

Of course, its not a Fell Hound story without some emotional twists and turns. I’ve been quiet about the non-action stuff in Rao because its hard to talk about it without spoilers. But the reasons behind Rao’s rampage are the true heart of this comic. Its a very bittersweet and somber tale.

AP2HYC: How might Commander Rao differ from your previous work, Do You Believe In An Afterlife??

FH: DYBIAA was a dreamy, colourful, robot-smashing love affair told through half prose at the end of the world.

Commander Rao on the other hand is pure sequentials and tells a much darker, more succinct story set in an all new dystopian era. Since it’s quite action heavy, I tried to keep the dialogue to a minimum and let the artwork tell itself.

AP2HYC: I find that Do You Believe In An Afterlife? has an optimistic vibe at its heart, whilst the art teases we’ve been seeing so far from Commander Rao hint at a much darker and more violent story. Would you agree or disagree?

FH: Its funny because when you look at it, DYBIAA’s world is so much darker. I mean, the world is literally ending! But these characters still managed to find happiness in their own way and the art direction largely reflected that.

Whereas Commander Rao takes place at the tail end of a terrible war. A time when the worst has passed and things should be optimistic, but they’re not. At least, not for Rao. Her inability to cope with certain events that happened during the war has left her the harbinger of her own darkness. She’s become so tunnel-visioned on this singular goal of hers that she would rain fire upon her path to see it through. I think Rao’s true motives might surprise people a little bit.

But the short answer is yes, it is much darker and much more violent.

AP2HYC: Do You Believe In An Afterlife? boasts numerous different approaches to colour palettes for different scenes to evoke varying moods. From what we’ve seen on of Commander Rao, the emphasis on colour remains strong. How important is colour for you, as an artist?

FH: Colouring is without a doubt the most important step of art for me. My “inks” (lineart, really) are very minimalist so I rely on colouring to really bring the scenes to life. 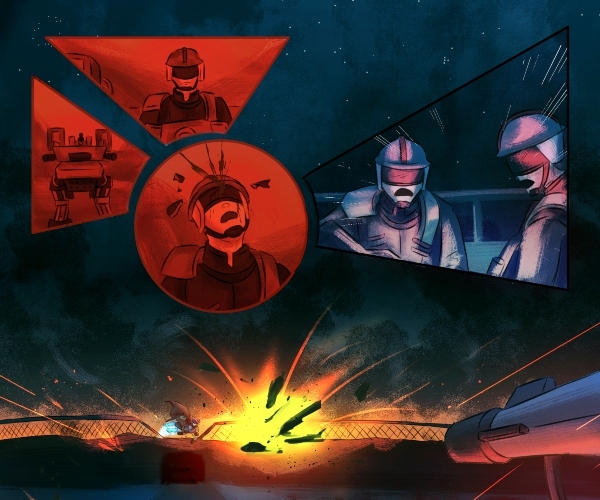 Lighting Commander Rao was a bit of a challenge because the entire story takes place around a hidden manor, in the middle of nowhere, at nighttime. So it’s like… how can I light this so that Rao stands out amidst the darkness? So that she doesn’t look like she’s fighting shadows the whole book? It didn’t help that she’s clad in black and navy blue.

My solution became “set everything on fire.” You have Rao and her rocket boots which make her this blue raging fireball zooming around wrecking havoc, and all the gunfire and explosions eventually create a nice orange glow to foil against.

The clashing blue/orange lighting gives the entire book a very dramatic and cinematic feel to it. Colouring this has been a blast but quite difficult to work on.

AP2HYC: Does Commander Rao break new ground for you as a story-teller?

FH: This is my first time drawing heavy fight scenes. There were some mild action shots in DYBIAA but it’s nothing compared to Rao. Part of why I wanted to make this comic was because my portfolio was sorely lacking any action pieces and I wanted to show range. But in working on this comic I think I’m starting to find my own voice in terms of action storytelling.

I knew early on I didn’t want to just draw a collage of people getting punched. Rao’s a very nimble character that relies on agility rather than brute force, so creating fight scenes that had a high sense of fluidity to them was my #1 priority. There is one layout in the book that I’m pretty sure I broke my brain on. Can’t wait for you guys to see it!

AP2HYC: What inspired you to pursue creating comics?

Sometime in college I discovered Batwoman: Elegy and it just blew me away. The art, the story, the character… I had never seen anything like it before and it was so different from what I would’ve expected from your typical superhero comic (before that my only exposure was Marvel movies).

I knew then this was the medium I wanted to tell my stories in. I was still a terrible artist and I couldn’t afford to hire anyone, but I did have time. So I spent it learning how to draw.

7 years later and here we are!

AP2HYC: Who are your artistic influences?

FH: In terms of writing, Terry Moore and Chris Avellone are two of my favourites. Both fantastic storytellers who are great at character focused narratives. I’ve also been eating up Ryan K Lindsay’s one-shots like no tomorrow. Eternal especially is peak comics to me.

I grew up on tumblr, so a lot of my favourite tumblr artists became huge influences as well. Though I’ll use their twitter handles for ease of credit. Ash, who does GORGEOUS cinematic arts of badass ladies, is probably one of the biggest. Her colouring tutorials helped me a lot. Other artists I look up to are Mashe (who did an AMAZING commission of Arid and Claire from DYBIAA for me), Shouty_y and Nesskain. Just incredibly talented folks.

AP2HYC: What other projects may you be working on?

FH: I’m currently working on a short comic with Jason Doring for the Starbound anthology that should be coming to Kickstarter soon! Also doing some work for Frankee White’s upcoming Project: Starless Daydream. Jason and Frankee are two amazing creatives so getting to work with them has been a blast.

I’ve also been doing some writing for the prequel to Commander Rao. Commander Rao is the first in a series of two standalone one-shots taking place in my “Dystopian War World”, and the prequel story is one I’ve been meaning to tell for a very long time now. I’m dying to say more but alas, until Commander Rao is released, my lips are sealed!

You can discover more about Fell Hound’s work via her Twitter and her Gumroad store. Will you be journeying into her dystopian war worlds? Let us know in the comments section or send us a Tweet!