What would you do if you suddenly had to grow up much earlier than you expected? Do you think you would be ready to face the world and its challenges? The Bender explores what that can be like. The protagonist, Keith, has to deal with uncertainty and lack of guidance after a tragic loss. Created by Ellis Matthews (writer), Iacopo Calisti (artist) and Matteo Polloni (letterer) the graphic novel is currently crowdfunding on Kickstarter.

The Bender begins with the sudden, premature death of Grace, Keith’s mother. We get to know that Keith is a smart, sensitive 19-year-old college student on a full scholarship. The boy lives in New York City, and he feels lost and starts neglecting his studies after his loss. Keith doesn’t really have a supportive friend group apart from his cousin Carla, who lives back in Pittsburg. Keith’s life unexpectedly turns around when he meets Johnny, a ruthless cowboy-criminal alcoholic who is on a revenge mission.

The Bender has 11 issues, and this is the plot of the first one. I think, and this is an educated guess, that the whole series will follow Joseph Campbell‘s template of the Hero’s Journey. This is a classic narrative trope that follows the storytelling model of someone who abandons life as they know it to embark on an adventure. The hero goes back to their lives changed or transformed after winning a challenge. A classic example of story that follows this trope is The Lord of The Rings. The first issue of The Bender ends on what is called Crossing the First Threshold on the Hero’s Journey trope. This means the hero leaves his known world and venture into a dangerous, unknown realm, where he meets a mentor that will challenge him to embrace his destiny.

The mentor of Lord of The Rings this is Gandalf The Grey; the one in The Bender is Johnny, a modern age cowboy. I’m doing this excursus on story telling and structure because the first episode of this graphic novel represents the first stage of The Hero’s Journey; it focuses on establishing and making clear to the reader how Keith has lived so far. Keith is sensitive, a little naive and has never had to take an important decision before. He’s around people who don’t understand what he’s going through, and he’s far away from the only family he has left. The challenge that Keith will have to overcome is going to ditch what he wants with what he needs. He wants someone new who tells him what to do, what he needs is to grow up. 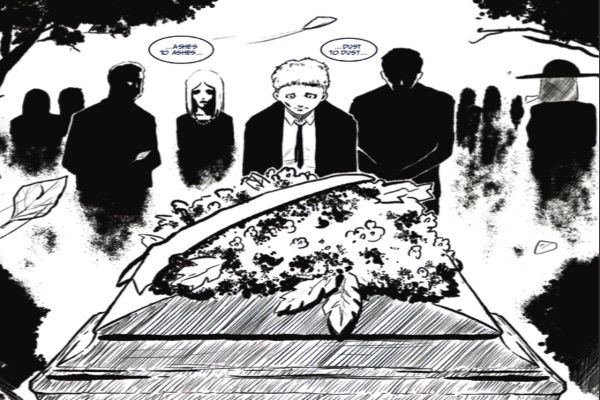 This first issue of the graphic novel can look like it lacks action; but just because this issue has the purpose of establishing story and character. In fact, I would say that what is compelling about this graphic novel is the curiosity you’ve developed towards the end, and you want to know how Johnny will influence Keith into changing. So, if you’re an adrenaline junkie you might find this first issue a little slow for your standards; but it does serve a higher purpose.

One of the things I can criticise is dialogue; not the quality but the quantity. Graphic novels are a visual medium just as much as films or TV shows, and you should be able to carry out the story using images rather than dialogue. We find out a lot about Keith’s traits because him and others mention them. This is superfluous use of dialogue, especially because us reader would have found out those things by just watching him. The same thing goes for Johnny. There are a few moments in the graphic novel where he talks about himself and  his plans and there was no need to, especially because it’s clear he’s a smooth character. Apart from this, the dialogues are well written and witty, like the characters.

The Bender is in black and white, apart from the first two pages. Matthews, the writer, disclosed he would like to hire a colourist when the graphic novel gains more popularity. When I first started reading it I thought the black and white had the purpose to show Keith’s sadness and internal life, but then I noticed the drawings were designed to be with colour. This is because, judging by the coloured pages, the artist heavily relied on colours to build up the three-dimensionality of the images. I think this graphic novel could have been executed just to be in black and white in the first place. Calisti is clearly very capable, and maybe approaching this work as black and white would have been a better choice. Sometimes is better to work with what you have instead of leaving a work unfinished.

However, there is nothing wrong in starting a project and waiting a little before it’s completed. The artwork is minimalist and tending towards realism, and with a really effective use of shadows. Some of the compositions have a cinematographic nature, like they were shot from different angles by a camera. All the close ups with the protagonist are quite powerful, and make us empathise with him even more; especially when put in contrast with his lonely silhouette.

In conclusion, I can say that this first issue of The Bender represents a promising beginning for the rest of the series. The wide-eyed kid with the smooth villain is a classic duo that always works; but this specific duo has an added fun twist to it. Just like Keith, I think that by reading it we could learn a thing or two more about life, growth and cowboys.

What do you think about The Bender? Have you been missing cowboys in graphic novels recently? You can discover more about the comic via its Kickstarter campaign. Sound off in the comments or leave us a comment on Twitter!