RAZE seduces a destructive kind of curiosity. Written by Claire Spiller, it borrows literary techniques, and does an excellent job at creating synergy between art and text. Spiller uses poetic conceits and splashes color against a typically monochromatic palette. Each piece of text has its own assertive impact; it either flows naturally along the visual narration, or resonates a kind of intrigue within the reader.

The comic tells an origin story of a present world and explores aspects of human greed and the concept of gods. The visual structure of the text is both simplistic and clever; it uses enjambment, a typically poetic device. This then adds reason and depth to each individual line within a sentence. There is also an eerie serenity to the tone of the text. The tone fluctuates between placating to accepting, and works well alongside the monochromatic palette. In terms of art structure and panel design, each page has its own unique styling. Some pages consist of multiple framed panels, while other pages use backdrop images that coincide with the text.

The structure by far is my favorite piece of storytelling device used. Below you can see the difference stylistic choices can make in terms of panel designs—each page has its own form of narration. On the left, you can see the backdrop of the forest overlooking starry skies. This contrasts well against the balance the text and the collective panels within it are trying to convey. On the right, the black background heightens the heavy gravity of the art and text of each individual panel. 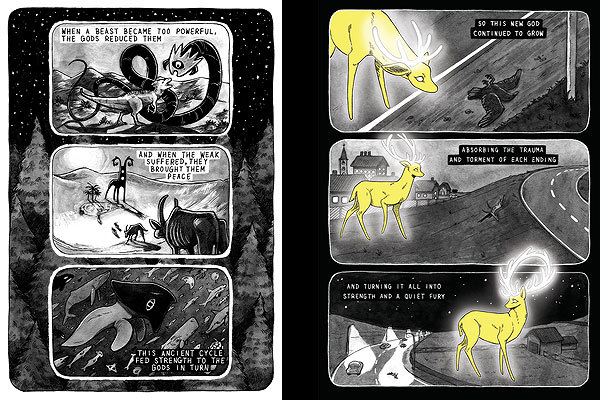 RAZE is a comic driven by conceit; there exist gods that are symbolized by eyes and stars. This alludes to an all seeing presence, one that looks down from above. This is present right from the very first page; “Long ago, in the days before man, there were more gods than there were stars in the sky.” Using the color yellow also lends itself to this conceit; its presence can be associated to several different things. Often linked to god, light, hope and the shine of the stars, the color yellow sparks energy into the comic’s chaotic silence.

The conceit is at first subtle. However, the continued references to stars and eyes become more gradual. It reaches its peak at the image of the deer caught in headlights alongside the text, “Still, man did not see.” This small, seemingly insignificant page, presents a blend of text, art and color; the art flows alongside the narration which soundly extends the conceit of light from the stars, and sight from the eyes. 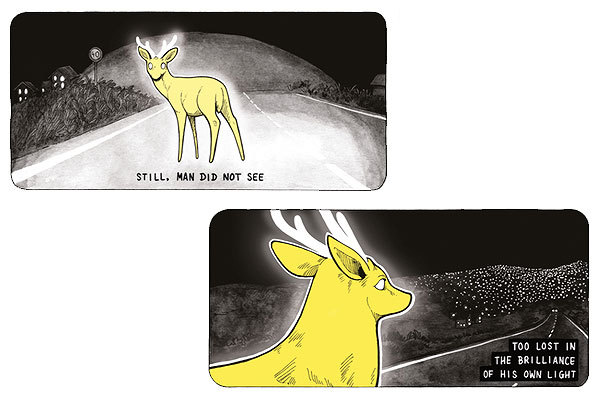 With art being so well connected to the text, there are several pages showcasing the gods and its connection to the image of stars. In another image, we see the dissipation of the gods into the dark abyss as they become one with the stars. This is both a bitter yet beautifully drawn sight to see.

RAZE makes use of poetic devices within the art itself; enjambment alternates as a form of cliff-hanging. In the midst of explaining the lost of vast lands and the countless victims of man, we see a curious lapse between text and art, before the next page reveals a sort of understanding. While clever, I believe this particular part could have been better executed. This is one of the few moments in which I found a disconnect between the text and art. When relating the present page to the next, it makes perfect sense. Still, on its own, there needs to be a cohesive visual reason for the representation of this particular panel, one that can also stand on its own.

Regardless of these minute moments of disconnection, RAZE still impresses. It has such a unique form of storytelling, one that incorporates art, text and color. Spiller captures well the essence of self-questioning to do with aspects of humanity and the concept of god. Still, the story itself is exclusive within the confines of its own world. The clever conceits, the duality in the enjambment, and the subtle details decorating the different pages, these are small little joys that enhances a reader’s experience and ties neatly the different parts of its own storytelling.

Want to stimulate your mind with text and visual brilliance, you can find RAZE from Good Comics. If you see other clever details, tell us on Facebook or Twitter or comment down below!