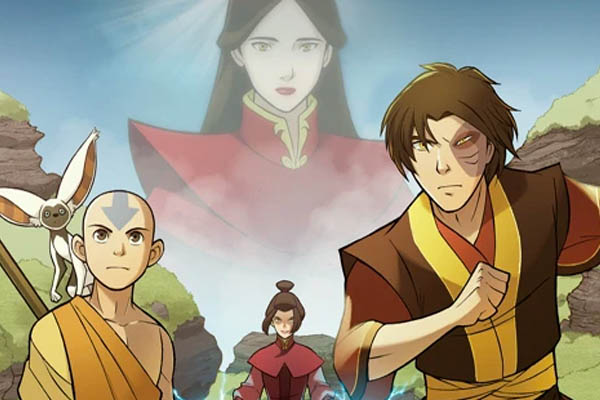 In July of 2008, the final episode of Avatar the Last Airbender aired on Nickelodeon in the United States leaving fans with a question that would plague the creators for the next five years: what happened to Zuko’s mom? It was a question that many fans were hoping would be answered in season three after posing an intriguing mystery to her disappearance in the season two episode “Zuko Alone”. Supposedly, Zuko was set to have a reunion with his mom at the end of season three but was taken out at the last minute so that co-creators Michael DiMartino and Bryan Koneitzko could tell the story in full rather than shoe-horning it in. And this sounded all well and good until we finally got the answer to all our prayers in Gene Yang‘s The Search. Beware, as there are heavy spoilers ahead for those who haven’t read the comic.

After ruling as Fire Lord for some time, Zuko finally manages to find a lead on his mother’s whereabouts. The catch? He is only able to get the information from his father by having his father tell Azula the lead and not him. Of course, Azula refuses to share the information she now possesses and insists on coming along to find their mother. Due to his sister’s unstable nature, Zuko enlists his friends Aang, Katara, and Sokka to accompany them. But as they come closer to finding Ursa, we learn more about Ursa’s past and how she came to be Fire Lord Ozai’s wife.

Like The Promise, this comic falls into the same trap of introducing promising story concepts only to fall flat on its face by the time the ending rolls around. The idea of Zuko and Azula reconciling with each other and Azula reconciling with Ursa are both interesting and emotional ideas to explore. Unfortunately, these get muddled by unnecessary side stories and overly dramatic plot points. One such side story involves a water tribe brother and sister who are seeking a spirit in order to regain the brother’s face who had his stolen from Koh the Face Stealer. While the concept of being able to change one’s face comes up later, there is absolutely no need to have these two in the story other than to reinforce the brother/sister dynamic the comic is trying to convey between Zuko and Azula. If you are expecting to reach catharsis through the Royal Family’s character development, you’re out of luck as the only relationship that gets resolved is the one between Zuko and Ursa.

And this is where we come to the elephant in the room: Ursa herself. Portrayed in the series as a mother that would do anything for her children, many fans expected her story to be very different from the one we got. Not to mention, we get classic moronic mysteries thrown in to keep the suspense going through all three issues. At the end of issue one, our views of Ursa begin to shatter as it is revealed that Zuko may not be Ozai’s son but rather Ursa’s former fiancé.

I cannot begin to describe how incredibly stupid this is as a plot point. Keep in mind, this comic was released in 2013, roughly a year after the first season of The Legend of Korra aired on television. We already know Zuko is the Fire Lord and stays as the Fire Lord until old age so throwing this little plot twist does absolutely nothing in terms of story development. Not to mention, big surprise, it ends up not being true, something that the reader will see coming from a mile away. Again, instead of focusing on tension and conflict that would be far more compelling, the story chooses to take us down a route that is pitiful at best. But it also highlights the flaws of Ursa’s character: she purposely wrote a lie in a letter to her family in order to see if Ozai was intercepting her letters. She put Zuko’s livelihood at risk for the sake of gathering information.

It’s no secret that Fire Lord Ozai is a POS and Ursa is a verbal and emotionally abusive relationship just as her two children are. She is completely aware of this yet still chooses these actions. And then we eventually come to the most disappointing moment in the comic: Ursa willingly has the memories of her past erased by a spirit so that she can live in happiness, abandoning her children to a monster. One of the many aspects Avatar the Last Airbender prided itself on was the strength of female characters and, in particular, mothers. We learn that Katara’s mother sacrifices herself to save her daughter. Ursa sacrifices herself for Zuko, in ways we finally learn in this comic. So to learn that Ursa fell to this level is disheartening. Was this done most likely just to explain why she was MIA for the series? Yes. But it didn’t need to be this way. It’s a disservice to her character and a disservice to the fans who had been waiting for this story to finally be told.

Could this story have ultimately been told more successfully? Yes, it could. But like The Promise and like all future Avatar comics, this series bites off more than it can chew. It comes up with interesting ideas but doesn’t allow them to breathe in a way that feels organic and earned and instead comes off as a soap opera. Characterizations are thrown away for the sake of drama.

You can purchase your copy of The Search at your local bookstore or online. What did you think of The Search? Let us know in the comments below or send us your thoughts on Twitter!