This is a review I’ve been holding off of writing for too long. That’s not because The Book of Forks is a bad comic, not by any means. I’ve avoided reviewing it until now because of the opposite. It’s… good. Damn good. Ron Davis‘ dense, abstract vision of youthful rebellion in a world recognisable in its form yet beyond any succinct comprehension draws to a close with this third and final volume in The Motherless Oven trilogy. By that definition then, The Book of Forks reminds me of Lucy Sullivan‘s Barking, another comic that defies regular encapsulation by your average review. What makes The Book of Forks more mind-bending is that there’ve been three of these comics to wrap your head around.

Throughout The Motherless Oven trilogy, Scarper, Vera and Castro have been causing havoc in their world, where it rains forks, where children invest their own parents mostly out of household objects and where people have deathdays rather than birthdays. Scarper’s avoidance of his deathday triggers a chain of events that sends the trio on a journey across their hometown and eventually, causes undoing of this strange world. During the climax of The Can Opener’s Daughter, the almost entirely mute Castro, a passive, non-violent soul compared to Scarper and Vera, has been kidnapped, placed into the cryptic Power Station prison. Throughout The Book of Forks, Scarper and Vera set out to rescue their friend, evading various captors along the way, whilst Castro attempts to unravel not just where he is, but complete the titular Book of Forks, his self-penned biography of the world of The Motherless Oven trilogy.

The most alluring aspect of The Book of Forks is this hefty volume Castro quietly scribbles away at. Whilst Vera and Scarper search for their friend, exploring previously unknown section of their strange world, time appears to stand still for Castro as he quietly completes something that readers of The Motherless Oven trilogy have been waiting for since the first comic. All of their efforts jointly contextualise the world that, until now, has remained a mystery as to just how it functions. Where Castro dedicates numerous chapters in his Book of Forks to the weather, the people and more, Vera and Castro prize open more of the world via their exploration of their friend, traveling to new and unpredictable corners of this surreal globe. In a savvy move from Davis, not all of the blanks are filled in. Some of Castro’s unboxing is guesswork, as if to retain a sense of mystery for this comic’s world-building. Castro’s writing is reflected in Scarper and Vera’s journey to find him, as they uncover terrifying new regions of their worlds they didn’t think existed. The world of The Motherless Oven trilogy has never been revealed to us before in such depth of detail. 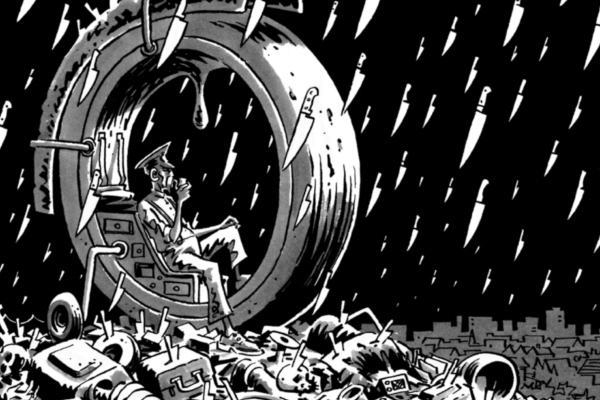 That sense of mystery remains intact, even with this very detailed account of how Davis has structured the world of The Motherless Oven trilogy. Throughout The Book of Forks, Davis illustrates numerous pages as chapter extracts taken from Castro’s book. However, they’re in a deliberately disorientating order – starting with chapter twelve, then chapter seventy five, chapter sixty, and so on. A reflection of Castro’s feverish thought process, or keeping some mysteries from the reader? Whilst some events from past comics are explained in these extracts, not everything is spelled out so clearly. Some mysteries are more entertaining when left unresolved. Davis’ depiction of Castro’s efforts themselves make for thoroughly engrossing reading, delivering a comic-within-a-comic atmosphere for this final chapter that bursts with imagination and attention to detail. A real-life Book of Forks would be hugely welcome, but would of course destroy the meaning behind its deliberately complicated depiction here.

Clashing with these cryptic vibes is Davis’ artwork. He continues to give this lucid, strange world and these runaway characters a curious familiarity, making the comic’s events all the more unsettling. He draws typically English streets and suburbs, all illuminated by the absurd constructs of this world. There’s little in The Motherless Oven trilogy that’s exaggerated or overly out of place, visually. Throughout all three comics, he’s created a world that’s visually so near and thematically so far. It’s a wonderful blend of the known and the unknown that gives these comics a bold aesthetic stamp. Complimenting this is the line art’s crisp, rippling energy. Despite adhering to a monochromatic colour palette, the blacks and whites give way to a muscular grey that’s heavy in texture and shadow. It’s a simple creative choice that’s matched by the regular panel structure and uncluttered lettering. For a multi-comic story so ambitious and purposefully impossible to fully unravel, it’s so modest in how it looks.

That sense of modesty is a winning weapon for not only The Book of Forks and for The Motherless Oven trilogy in general. The intricate details of this world Rob Davis has created don’t feel forced or artificial, they feel natural and inviting. The recognisability in Davis’ artwork mixed with the unpredictable surrealness of the story makes The Book of Forks a champion of a comic book. The Motherless Oven trilogy stands as a masterful deconstruction of reality and perversion of the mundane framed through teenage rebellion and redemption. These are more than just good comics, they’re vital comics.

You can discover more about The Book of Forks from SelfMadeHero. Have you journeyed into these surreal comics? Let us know in the comments section or send us a Tweet!