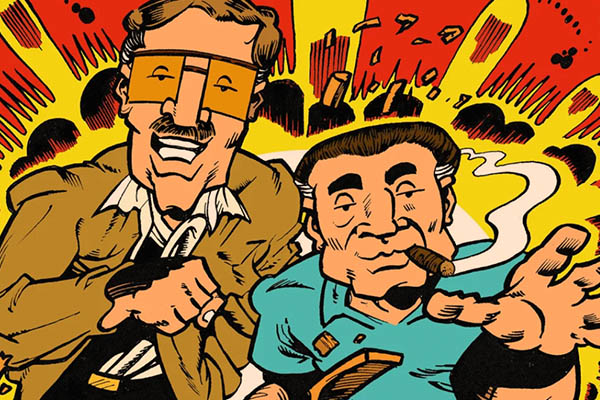 Oh, to have Stan Lee and Jack Kirby as a part of my collection. That would be sweet. To say that Lee, mastermind of the MCU, and Jack Kirby, creator of my personal favorite DC villain Darkseid, are titans in the comic book industry would be a massive understatement. To say that their relationship with one another was tumultuous would be akin to saying the Titanic and the iceberg were only a casual fling. Stan & Jack issues #1 and #2, gifted to us by Peter Doree, is a chronicle of that one time the visionaries were sucked through a mysterious portal and almost harvested for their vast, creative intellect by aliens.

The art style here, pleasantly in black and white save the cover, is delightfully retro. I say this as a positive: Lee and Kirby’s heads look like Pez dispensers. Lee has his big, square glasses and comb style mustache. Kirby has straight, slick hair and a no-nonsense cigar. There is a generous attention to detail, given the lack of colour. Issue #1 in particular has two great panels involving a dynamic team-up and villainous reveal. Every character, and there are a LOT, feels unique. From Steve Ditko as a mysterious, noir stranger and Vaughn Bode as, well, Vaughn Bode. 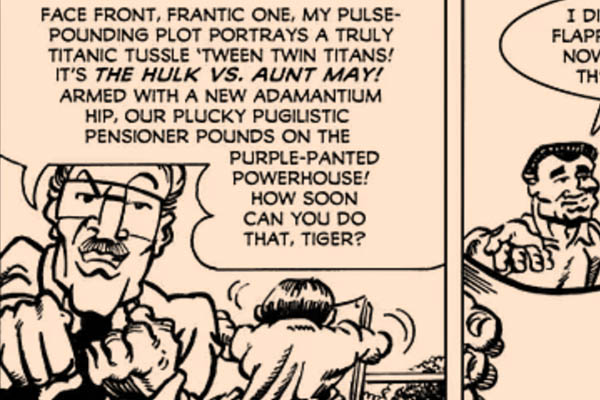 It makes distinguishing them, and their varied techniques as artists, easy for the reader. I’ll admit, though, even I had to do just a smidge of googling after reading. Which is to say, the parable of Stan & Jack swiftly becomes a who’s who extravaganza of comic icons. All of whom want their time to shine in the spotlight. Some even demand it, but that precious shine is finite and hard to come by.

The escape artist, Jim Steranko, and the self-proclaimed Godfather Dick Giordano only get a few lines each in issue #2. Having each creator’s perspective and witty banter—what would Ayn Rand do, Ditko?—is something I appreciate. Though, I want to see and hear a little more from everyone in the future. The gallery of icons on display here would put the lineup of Avengers Endgame to shame. With regards to Lee’s constant slew of strenuous alliteration, I agree with Wally Wood when he says Stan sounds like a dictionary with diarrhea.

The most prominent train of thought I boarded after finishing the first two issues of Stan & Jack is at the end of our adventure, will the villain remove his mask and reveal himself to have been none other than Stan Lee himself? The man behind the Marvel fandom is beloved, yes. However, when it comes to Jack Kirby and many of his fellow comics—including several of the ones featured in the forefront here—Lee is far from perfect. From the onset of Stan & Jack, Lee is fairly clear about who will be receiving all the credit in the end: himself.

Going forward, will the less well known sides to these creators lives be dwelled on? Ditko, Wood, and Gil Kane would all decidedly be team Kirby in a potential stand-off, who would be team Lee? Is there a new breed of fanboy on the horizon that only wishes to use writers and artists like Bitcoin? The scope of what Stan & Jack could be is vast and ripe with opportunity. I, for one, hope that our journey is not just content to be a fairy tale with only little hints here and there at what all these legendary creators really thought of each other.

You can learn more Stan & Jack here! Already checked it out? Let us know your thoughts down in the comments, or send them to us via Twitter!