Mad Cave Studio‘s Stargazer #1 left me wanting more in the best way possible. This science-fiction comic is equal parts nostalgic and original, and thoroughly engaging. With a thrilling abduction mystery and a beautifully vibrant colour palette, Stargazer is shaping up to be a very promising series.

Stargazer #1 shares many aspects with beloved sci-fi/horror stories of the 80s and 90s: a government cover-up, an unexplained event of supernatural origins, and a group of young childhood friends. But that’s no reason to discount it. It’s 1999, and Shae, Adriana, and Hailey, along with Shae’s younger brother Kenny, are out in the woods to do some stargazing. Inevitably, our group of friends stumbles upon something paranormal and life-changing. When it comes to the supernatural, the comic smartly keeps most of its cards close to its chest, leaving a lot to the imagination and building up an intense feeling of mystery and dread. The story quickly shifts to the present day, our characters now grown-up. Much of what happened is as much a mystery to us as it is to them, in many ways even more so. This is one of many unique spins on a familiar concept the comic employs, and it’s fascinating to see these characters so many years later, changed by this event of years past. We are introduced to an older Shae, a troubled and tired woman now very concerned about Kenny, who has become obsessed with what happened to him as a child. This sibling relationship seems to be at the core of the story, and it’s how Shae and Kenny‘s relationship has changed between time periods that truly gives weight to the unexplained events. 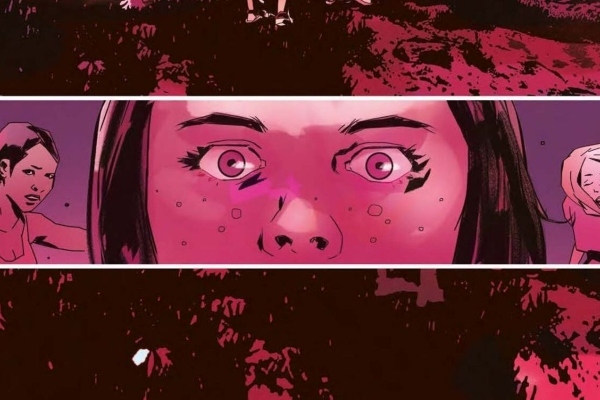 I really appreciate a lot of aspects about this set-up, as it is quite familiar, but with an atmosphere and characters that are uniquely its own. For starters, it’s refreshing to see this type of story told through a group of young female protagonists, as opposed to the usual squads of mostly boys used in many of the King and Speilberg stories that this comic seems to draw inspiration from. Though our time with these girls is limited, we get a clear sense of their dynamic. Anthony Cleveland‘s writing of all of the characters, especially the children, is simple yet natural. Their dialogue immediately clues you in to their personalities and their relationships with each other. Nothing feels forced or overly expository, and in the face of the scary and unexplained, they behave like real children.

Unquestionably, the best parts about this comic are the visuals. Antonio Fuso‘s background and character art is sharp, stylized, and detailed, expertly capturing the emotion of the characters and entire scenes as a whole. Some panels are absolutely breathtaking, thanks in no small part to the gorgeous colouring by Stefano Simeone. The colors do wonders to highlight the tone and atmosphere of the different scenes and their settings. A scene in the desert feels hot, desolate, and suffocating. Meanwhile, when our main characters have encounters of a seemingly extraterrestrial nature, the colours reflect the confusion and chaos of the situation, as well as the otherworldly presence. There are lots of bright pinks and purples, contrasted against the dark blacks and violets of shadows. All of it has a very retro, neon, and cosmic style. I could practically hear a spooky, synthwave soundtrack as I read it. It’s also no surprise that the night sky and stars themselves receive a major focus in the art. The detail in the sky’s colours and the abundance of bright, unique stars make it seem almost alive.

This issue consists of a lot of set-up, but very promising set-up none the less. There is a twenty-year gap between the present story and the opening flashback scenes, and I’m curious to see how the stories of the past and present will be shown to us going forward. Stargazer #1 raises many questions, both about the secrets of its world and the type of story it will shape up to be, but without a doubt, I can say that it left me looking forward to the next issue. The quality of the storytelling here gives me high hopes that the series will be able to keep its momentum going, exploring its characters in interesting ways and delivering satisfying conclusions to its mysteries.

Be sure to check out Stargazer #1! Do you have a favorite alien abduction story? Sound off in the comments or send us your thoughts on Facebook or Twitter!